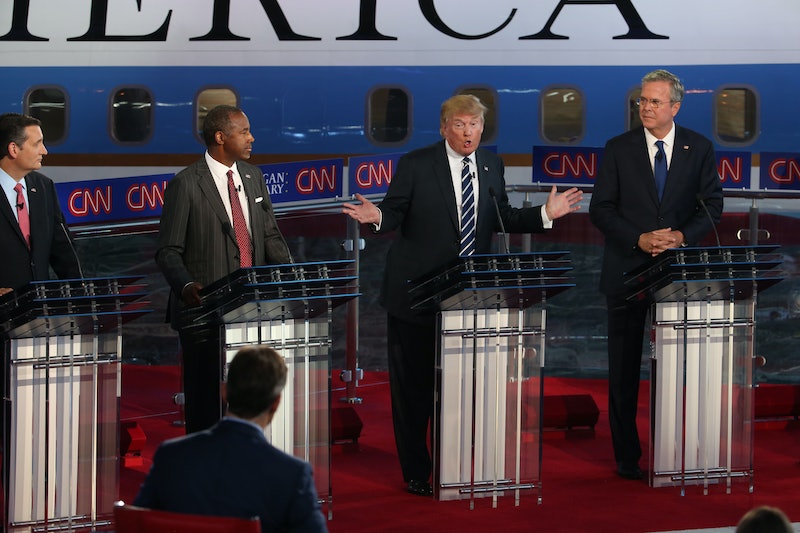 Before someone is deemed the loser in a presidential debate, they're generally standing behind one of the podiums and share a series of nonsensical statements (or, worst case scenario, stay silent the entire time). But during the second GOP debate on September 19, the Internet rewarded the not-so-coveted title to moderator Jake Tapper. (I know, I also thought that it would go to Rand Paul or Scott Walker again.)

On Wednesday night, the author and CNN journalist took on 15 Republican party candidates, including the always-amusing Donald Trump and prime-time newcomer Carly Fiorina. One would assume that a person with Tapper's credentials — which include anchoring two of CNN's news programs and winning three Merriman Smith Memorial Awards for broadcast journalism — would be able to take on (and, more importantly, take control of) a room of outspoken Republicans.

But rather than posing the tough questions and keeping candidates on track, Tapper appeared to play favorites, and let the candidates throw personal punches at each other and exceed their allotted time. And as is always the case, the Internet took notice of Tapper's shortcomings. Here are just some of the problems people had with his moderating abilities (or lack thereof).

He Ignored The Important Issues

He Had No Control Over The Candidates

Basically, He Was Horrible

But One Thing Was Clear