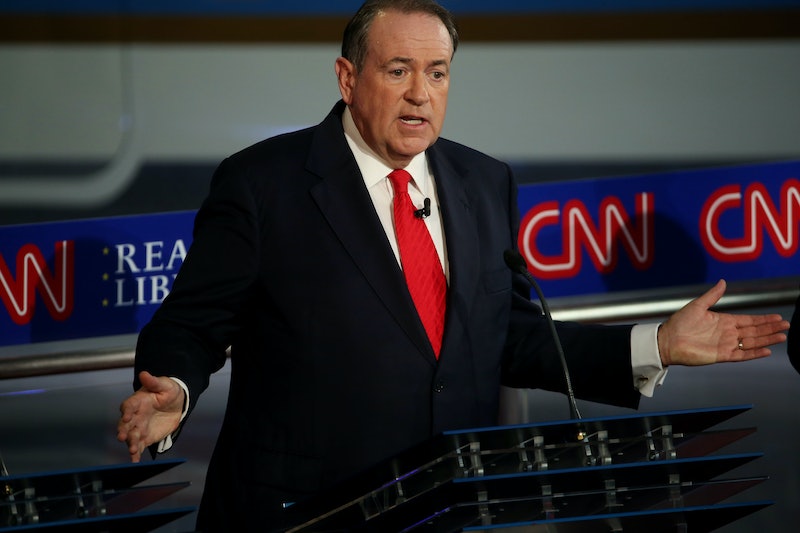 And you thought that Donald Trump was the most sexist potential presidential candidate. OK, he probably is, but several of his fellow Republican nominees made offensive remarks towards females during the September 19 GOP presidential debate. Most notable were Governor Mike Huckabee's comments about which woman should be on the $10 bill — a topic that has been heavily talked about this year. When asked by moderator Jake Tapper which woman he would select to replace Alexander Hamilton, Huckabee's answer started out sweet, but quickly turned sexist:

"That's an easy one. I'd put my wife on there I've been married to her 41 years. She's fought cancer and lived through it. She's raised three kids and five great grandkids. And she's put up with me. I mean, who else could possibly be on that money other than my wife. And then that way, she could spend her own money with her face."

Although I'm sure that Janet Huckabee would love to see her face on the $10 bill ( I mean, come on, who wouldn't?), she doesn't need to grace a greenback to spend it. Nor does she need her husband's permission to do so. Not to mention that, given her career as a manager for Hanke Brothers Construction Company, I'm sure she has plenty of her own money.

As for the other candidates, their responses ranged from the heartwarming (Ben Carson is pushing for his mother) to the confusing (did Chris Christie just suggest Wednesday Addams?).

"Susan B. Anthony might be a good choice." — Sen. Rand Paul

"It should be Rosa Parks. She was a principal pioneer that helped changed this country, helped remedy racial injustice, and that would be an honor that would be entirely appropriate." — Sen. Ted Cruz

"I would put my mother on there. She was one of 24 children. Got married at age 13. Had only a third-grade education.Had to raise two sons by herself. Refused to be a victim. Wouldn't let us be victims, and has been an inspiration for many people." — Dr. Ben Carson

"Because she's been sitting for three hours, my daughter Ivanka. Other than that, we'll go with Rosa Parks." — Donald Trump

"I would go with Ronald Reagan's partner Margaret Thatcher. Probably illegal, but what the heck, it's not gonna happen. A strong leader is what we need in the White House, and she certainly was a strong leader that restored the United Kingdom to greatness." — Gov. Jeb Bush

"I'd put Clara Barton. I once worked at the American Red Cross. She was a great founder of the Red Cross." — Gov. Scott Walker

"I wouldn't change the $10 bill or the $20 bill. I think honestly it's a gesture. I don't think it helps to change our history. What I would think is that we ought to recognize that women are not a special interest group. Women are the majority of this nation. We are half the potential of this nation, and this nation will be better off when every woman has the opportunity to live the life she chooses." — Carly Fiorina

"This is probably not maybe legal, but I wold pick Mother Teresa. A lady that I had a chance to meet. A woman who had a life so much bigger than her own. An inspiration to everyone when we think about our responsibility to love our neighbors as we love ourselves." — Gov. John Kasich

"I think the Adams' family has been shorted in the currency business. Our country wouldn't be here without John Adams, and he would not have been able to do it without Abigail Adams. So I'd put Abigail Adams on the bill." — Gov. Chris Christie