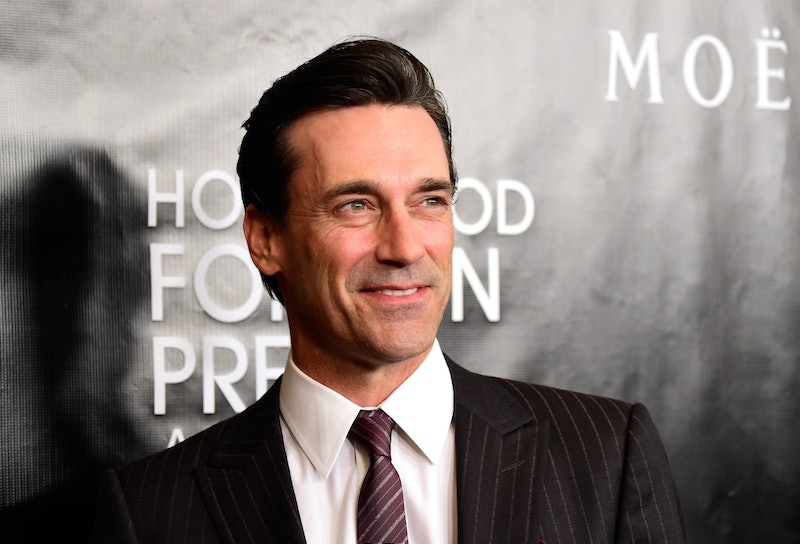 Sigh, poor Jon Hamm: he's never won an Emmy in all his years playing anti-hero Don Draper, and this Sunday at the 67th Annual Emmy Awards, he might be walking the red carpet stag. Hamm recently broke up with his partner of eighteen years, his Friends With Kids co-star Jennifer Westfeldt, one of many sad splits in a summer of heartbreak. And with all the heartbreak on my mind, it makes me wonder who Hamm dated before Westfeldt (Even if it feels impossible to fathom him standing alongside anyone else.)

Even though there have been some (falsely) rumored flings, it looks like Westfeldt has been the only lady in Hamm's life for the past eighteen years, and he's been mysterious about who he was with pre-Jennifer. Hamm and Westfeldt met almost two decades ago in a classic Hollywood meet-cute — at a mutual friend's birthday party in Los Angeles in the late nineties when they were both struggling actors.

In an interview with The Hollywood Reporter in 2011, Hamm, 44, said that he and his gal first got to know each other when he helped her run lines for an audition: "She got an audition for Jake Kasdan's film Zero Effect and wanted to read with somebody who was a guy, and she didn't really know any guys out here, so she called... and that was, kind of, how we officially met, running scenes... Apparently I wasn't very good, 'cause she didn't get the part." Good for Westfeldt for using her resources.

The couple started dating a year later, and here's where the mystery woman in Hamm's past comes in: "She was involved with somebody, and I may have been involved, as well. Yeah, we were friends for a long time before we officially started dating," Hamm said later in the same interview with THR. "May have been involved"? I want to know who this woman is, the one that knew Hamm back when he was just a nerd with a middle part on The Big Date.

Hamm and Westfeldt never tied the knot and because of that tiny distinction, faced a lot of dubious rumors and about about their relationship in Hollywood, especially after Hamm started playing the casanova Don Draper on AMC's Mad Men in 2007. But the couple was pretty good-natured about the skepticism: "The hardest bit for people is that Don Draper is such an iconic character that fans of the show have a really hard time imagining Jon is not like that. That he is really this goofball. And that he is in this long relationship. That is, I guess, why people come up and say all sorts of wildly inappropriate things to him, and me, which don't bear repeating," Westfeldt told The Guardian in 2013.

Last year, there were some rumors swirling that Hamm was dating his Mad Men co-star Elisabeth Moss; but just like Peggy Olson was always platonic in her relationship with boss Don Draper, Moss and Hamm were never together. Hamm quashed the rumors pretty quickly; they sprung up like weed after the Mad Men co-stars innocently visited Disneyland together. What's so scandalous about going to ride Space Mountain and getting a Dole Whip with your friend and co-worker?

So while Don Draper may have wooed, romanced, and canoodled with a bevy of beautiful, fictional women, it looks like Hamm was a one-woman man for the past few decades. But he's single now, so of course, here come more rumors: apparently now Hamm is being linked up by dubious sources to his Minions co-star Sandra Bullock. Not that they wouldn't make a good couple, but why don't we all let him chill for a bit? He's obviously going through a rough time, and I'm sure he's jittering with pre-Emmy nerves — after all, it's his final chance this Sunday to take home that golden statue for playing Don Draper that has so long evaded him.

Maybe Hamm will bring a date to the Emmy Awards this Sunday night, and maybe he'll fly solo, but either way, I'm more concerned with who's taking home that statue.