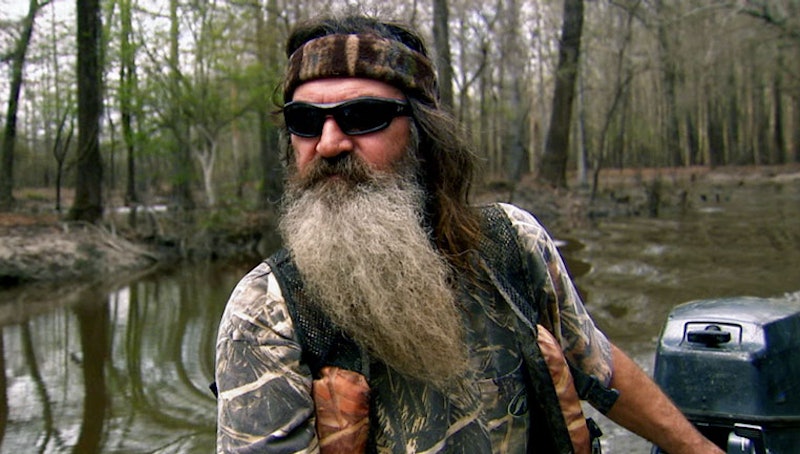 With numerous politicians, corporations, and, of course, his Duck dynasty on his side, it's not surprising that Duck Dynasty star Phil Robertson refuses to apologize for his controversial anti-gay words in an interview in GQ. After his statements — in which he compared homosexuality to bestiality — ignited a media firestorm and culture war, Robertson has finally spoken out about the controversy — which left him suspended from A&E — telling his Bible study group in West Monroe, La., that he has no intention of backtracking from his statements. As Robertson said Sunday, according to The Daily Mail:

But that's hardly all. Robertson continued to condemn homosexuality during the Bible study, digging deeper into his claim to GQ that "It seems like, to me, a vagina — as a man — would be more desirable than a man’s anus."

I am just reading what was written over 2,000 years ago. Those who live like this will not inherit the kingdom. All I did was quote from the scriptures, but they just didn’t know it. Whether I said it, or they read it, what’s the difference? The sins are the same, humans haven’t changed ... If we lose our morality, we will lose our country. It will happen.

And, of course, there was your requisite comparison to another famous figure who was once unpopular for his beliefs.

Jesus Christ was the most perfect being to ever walk this planet and he was persecuted and nailed to the cross, so please don’t be surprised when we get a little static.

Such words might have you rolling your eyes, but Robertson, at this point, has little reason to back down. Not only are his millions of fans aligning themselves with his Biblical message, but bullying even corporations into continuing to sell Duck Dynasty products: Over the weekend, Cracker Barrel decided to discontinue some items, but later posted a message on Facebook saying, “You told us we made a mistake. And, you weren’t shy about it. You flat out told us we were wrong." And, so far, big box stores like Walmart — which, as one can recall, discontinued Paula Deen products following her n-word scandal this summer — continue to sell Duck Dynasty products. But, perhaps most ridiculous of all, our nation's leaders are also backing the reality star, with one GOP congressional candidate calling Robertson the "Rosa Parks of our generation."

The continued anti-gay perseverance is depressing to watch during a year that struck down the Defense of Marriage Act and Proposition 8, but, let's face it: Duck Dynasty has always been pretty damn depressing too.