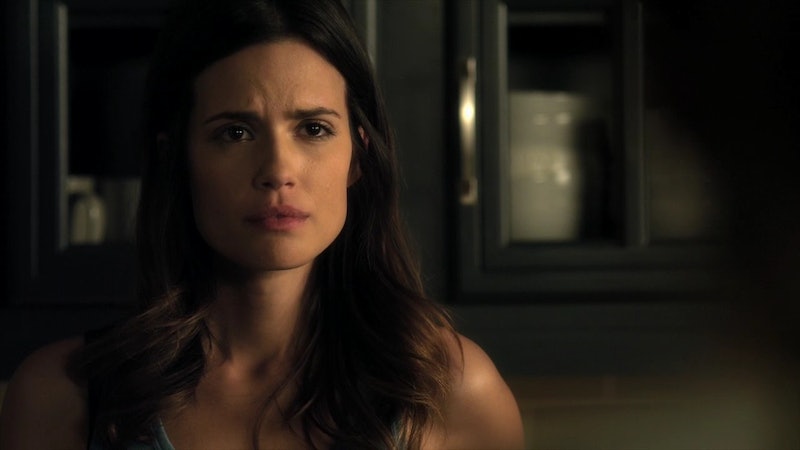 If there's one thing I don't envy at all about ladies of Pretty Little Liars , it's their relationship with their siblings — and not just because Ali's big sister Cece turned out to be Big A this entire time. Prior to learning that Cece was the girl under the hoodie and Ali's older sibling, the most strained sister relationship would have to go to Melissa and Spencer Hastings. From stealing each other's boyfriends to inadvertently setting the other up for a murder charge, these siblings aren't going around braiding one another's hair. In fact, Melissa still remains one of the shadiest characters on the series: it's never quite clear if she's protecting Spencer or looking to take her down. So, what will Melissa be doing when Pretty Little Liars returns?

We haven't seen much of Melissa recently, but she's still an integral part of the larger mystery. We already know that Melissa was the one who buried Bethany (which meant that she technically killed her, as Bethany was buried alive) but that's not the only involvement she has with this entire mess. Melissa was connected to the N.A.T. Club, and she knew things about Ali that perhaps even the girls aren't aware of yet: could that help weave her into the action of Season 6B?

Though Melissa isn't confirmed to return to Pretty Little Liars, it's only fitting that she makes at least one appearance in the upcoming season — the elusive Hastings has plenty of skeletons in her closet, and it's only a matter of time before they get shaken out. So what could Melissa be up to in Season 6B? Here are some ideas...

1. She Could Be Married To Wren

I refuse to believe that we live in a world where Wren's shady-as-hell behavior is just a coincidence. Melissa and Wren are currently shacked up together in London, and while they did postpone their wedding after the whole "Wren kissed Spencer" thing, they seem to be awfully cozy playing house. If Wren and Melissa are still together when Season 6B picks up, they could've gotten hitched some time during the time jump — which might bring Wren back into our lives.

2. She Could Be The New Veronica Hastings

Melissa had business school ambitions, but a lot can change in five years. Melissa certainly has the brain of a lawyer, and the pedigree to match — could she be the person handling the latest round of Rosewood murders in Season 6B? Her mom would be so proud.

3. She Could Be In Prison

Spencer and the girls may be letting bygones be bygones when it comes to those involved in Bethany's murder, but I'm not sure that the police will see it the same way. Melissa buried someone she assumed was Ali alive because she thought that Spencer had killed her: even if that played out exactly how Melissa assumed, Melissa is still an accessory to murder. The fact that she accidentally caused Bethany's death is at the very least manslaughter, and now that Cece revealed the whole entire story, it's only a matter of time before people start questioning Melissa's involvement.

4. She Could Be The Show's Latest Murder Victim

Melissa dated two people who died under mysterious circumstances — Garrett and Ian. We still do't have a clear explanation as to why they were offed, but it seems to have something to do with the N.A.T. Club and secrets they were holding. Melissa was so terrified of also being killed that she fled to London, but it doesn't seem like it was Cece that she was so afraid of. Could the new person who is after Ali be after Melissa too? And if so, could this person kill her in Season 6B? She might be the most logical person to meet her demise.

Fingers crossed we get some major Melissa answers when Pretty Little Liars returns: Season 6B owes us some explanation for her shady behavior over the years.