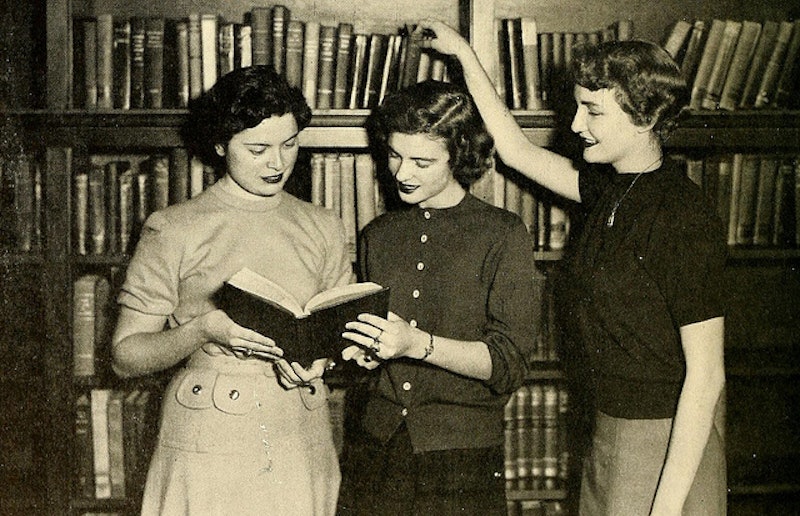 I, like many teen girls, probably got a "comprehensive" education about women's health — at least, by the standards of my high school. I learned about how to put on a condom, that I could get pregnant essentially by breathing in the vague neighborhood of some sperm, that STDs would rot through my cervix and leave me dripping green scum like some kind of angry octopus, that you could solve a yeast infection by using yogurt, and ... no, I think that's it. (I'm exaggerating, but only a little.) The bits I could have really used — you know, like talking to a partner when you've got an STD, making decisions about reproductive health, dealing with infertility — were left conveniently aside. And that's nonsense.

Women's health is, like women's education, a key part of female empowerment worldwide. If we're not educated about our own bodies and in control of them, we're less able to make good decisions about our health and future. Ignorance isn't just a good anecdote ("lol, she thought she couldn't get pregnant standing up"), it's genuinely a problem.

So here are seven things we should all have been told in school about women's health — because it would have saved a hell of a lot of time later on.

1. How To Have A Conversation About STDs

I can see why schools might shy away from this like, well, the Plague. Getting a room of teenagers to play-act telling an intimate partner they have herpes would be admittedly likely to deteriorate rapidly. But learning communication skills to talk about any illness, particularly societally stigmatized ones, would have been useful. A few scripts on hand, a suggested time-and-place guide, some reassurance about how they might react — all could have been seriously helpful later down the line.

2. Why Periods Are Stigmatized

Girls in high school often feel embarrassed about their periods, as a New York high school's plan to offer free tampons in every bathroom reveals. (You don't have to carry money, go to the nurse, or take your purse to the bathroom, so nobody has to know.) But where does this ickiness come from? What, culturally, has led to so many societies in history making menstruating women into outcasts? Sometimes a bit of historical perspective and conversation can help people get to grips with their own modern situation.

This is a tough one — but abortions do happen, they're a valid and legal choice, and people should know what it's like to have one or to have a partner experience one. Often it's seen as too "adult" for teens to discuss, but openness and honesty about abortion can only be useful. Three in 10 of the female students at a high school will have an abortion at some point in their lives, so being real about the benefits, the procedure and the impacts will demystify the choice.

Are women mentally "weaker" than men? Are they more prone to certain types of mental illness? What does postpartum depression really mean? A good high school curriculum should confront ideas and myths about women's mental health, and uncover the imbalance in certain mental disorders — for instance, the fact that women are almost twice as likely as men to have depression. Given that many mental illnesses first start to manifest in high school, this is a damn good time to talk about it.

5. That There Is No "Perfect" Vulva

The idea of vaginal and labial plastic surgery is now firmly entrenched — despite the fact that there is absolutely no such thing as an "ideal" vulva or labia. Girls getting their social messages from pornography and bikini shoots may look at their own intimate parts with despair or anxiety, and it's pretty important to emphasize that desirability is not inherent in the look, shape, or feel of their vulvas.

6. That Infertility Is A Thing

"But they're only teens! Why would they need to hear about infertility?" Because it may come as a rude shock to them when they decide to try to conceive, that's why. Infertility is a hidden conversation in most of modern society, which is why we made a big fuss when somebody like Tyra Banks or Chrissy Teigen reveals their struggle to get pregnant, and why miscarriage remains a weird taboo.

Letting girls graduate and plan their futures without the awareness that baby-making may not be as easy as it seems isn't fair, and it also reduces visibility and understanding for women who do have problems conceiving. Making something normal and OK should start young.

7. That Gender Inequality Is A Real Factor In Health

This spans two different aspects of life as a woman. Obviously our vulnerability to breast cancer and ovarian cancer is an inherent part of being a cis woman, and we're also more vulnerable to infection, according to a study released in Nature in 2013.

However, it should be made clear to school-aged girls that gender inequality — societies where women don't have power over their lives or bodies — is one of the most dangerous threats to women's health worldwide. The more unequal the society, the more likely women are to get HIV/AIDS, tuberculosis, malaria die in childbirth, you name it. It's important to give health a context, and to make people understand that disease and bad health don't happen in a vacuum, particularly for women. They're female and in an unequal world; make them care about it.