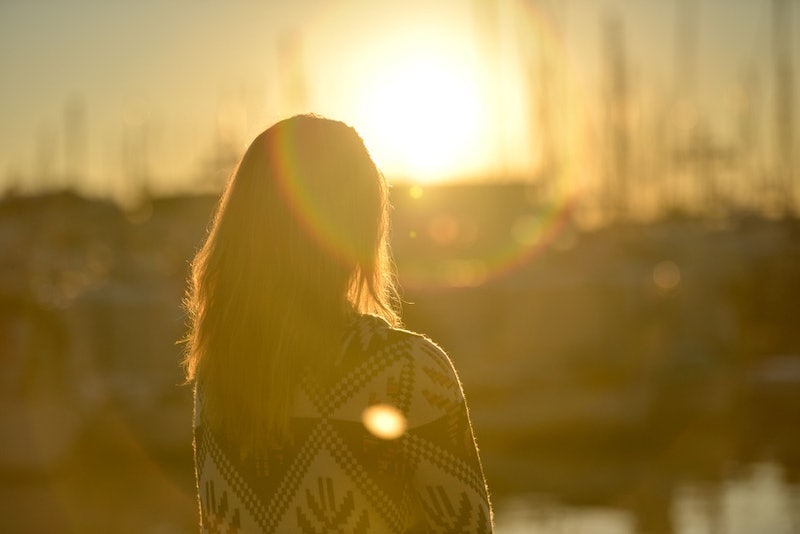 I think we can all agree that breakups suck. But something that's equally uncool is getting yourself into what you think is a great romance, only to uncover signs that you're the rebound. We cope with breakups differently and find our own ways to get over a breakup and move on.

The poetic idea of a rebound romance was put rather nicely by Mary Russell Mitford, who, back in 1830, wrote that there's "nothing so easy as catching a heart on the rebound." Well, ain't that the truth? As Mary C Lamia Ph.D. told Psychology Today, since those on the rebound tend to have unresolved distress from their previous relationship, their emotional capacity and good decision making may be in question. This is because many of their thoughts and feelings are still being influenced by their ex, turning it all into a game of substituting a lost love.

Nothing about that sounds remotely appealing, or healthy for that matter. So how do you know if that's your situation? I wish there was a straightforward answer that some magical equation can give you, or a universal date after a breakup that confirms if it's a rebound or not. Unfortunately, love is boundless and adheres to no such rules. But, for starters, here are eight signs you can look out for to help you figure out if you may just be the rebound.

As Thought Catalog's Ari Eastman so succinctly put, if they're like that famous Katy Perry song, that's a rebound red flag. This sign is always tricky to get a good grasp on because when you're in the honeymooned midst of a new relationship, infatuation takes hold and can definitely cloud your better judgment. Love can be blind. Or at least, blind and more forgiving of the negative aspects of the relationship. We tend to idealize our partners more for a number of reasons, one of them being that we would rather positively evaluate that which we desire, Aaron Ben-Zeév, Ph.D told Psychology Today.

So when it's good, it's really good and you're probably telling yourself it's going someplace awesome. But then, there may be times when they're totally MIA and off the grid. And then they come back and you forget all about it and everything is wonderful. Healthy and balanced space in a relationship is great. But sporadic, hot-and-cold behavior that leaves you hanging probably means your S.O. is vacillating between wanting to spend time together and wanting to run away as quickly as possible, Sheryl Paul, M.A., told MindBodyGreen.

This point usually cements its way at the top of most "signs you're the rebound" lists, and for good reason. While communication is key in a relationship, and covering topics like past relationships shouldn't be a problem, if your partner's ex seems to be finding his or her way into pretty irrelevant conversations, of course that's a red flag. One minute you're talking about the amazing food you tried in Thailand and before you know it, they're bringing up how annoying it was that their ex hated spicy food. I don't think it takes much math to put two and two together that he or she may still be hung up on their ex. Just a thought.

When you start seeing someone, it's natural to get excited and maybe want to jump into things. But pushing to hang out and sending overzealous text messages may not be as good of a sign as you think. Especially when they start wanting to take selfies everywhere and constantly try to feature you in their Snapchat stories, maybe it's time to hit pause and reconsider. It may feel a little like they're flaunting you and showing you off to the world, which is flattering for sure, but probably isn't coming from a healthy place. According to eHarmony, take notice if you get the sense that your date is just happy to be dating anyone, because this is a surefire sign that they're not really dating you for you, but to heal the sting of their breakup instead.

4. They Push For The Physical

Sex is great, but is it more physical than romantic? Less talk, more touching? Jennifer Kelman, a relationship expert on Pearl.com told She Knows that someone coming out of a relationship who has been tied to someone else may just be looking to play the field a little and get it out of their system. So if it feels like your relationship is heavily focused on sex and you can't even just casually hang without taking things into the bedroom, there's a sign that they may just not be ready to commit to you emotionally.

5. They Run Away From Commitment

And speaking of commitment, they don't actually speak about it at all. Or show any signs of it. Especially if you're rocking that undefined-I-don't-know-what-we-are-no-labels thing that seems to be so trendy these days. eHarmony pointed out that if your date can't even commit to a single relationship decision, like something as simple as hanging out on a Friday night, he or she is still adjusting to a life of singleness. Maybe they're keeping their options open because they felt they "settled" last time. Maybe they're just not over their ex. Maybe they really do just need this time to be independent. At any rate, if they're constantly avoiding the topic, and any conversation that has to do with the future for that matter, chances are you're in a rebound relationship that's not going to give you the security and commitment you need.

You may swear it's not a booty call because it's not like you hook up every time you hang out, and since you're both so busy, nighttime hangouts are convenient. OK, that may be valid, but it doesn't necessarily have to be physical to be considered a booty call. It can be an emotional booty call. Something to ease the loneliness of nighttime. Since we're usually busier and more distracted during the day, loneliness tends to strike harder at night. So naturally, we'd seek company. And that's fine, but if someone really wanted to spend the time to get to know you, wouldn't you think they'd make more of an effort to include you in different parts of their life? And not just when all other options have fallen through by the time midnight rolls around. You're sure as hell more valuable than just being someone's option.

7. They Don't Really Know You

So you've covered the basics. By this point they probably know where you went to school, where you work, your drink of choice — but that's as deep as it gets. They don't really care to know about the little things. The little quirks that make you the lovely human that you are. This can also be hard to assess because you can go a while thinking you know a person and vice versa. But as Trina Giffin pointed out on a YouQueen article, someone who cares about you recognizes what's important to you, and genuinely makes the effort to incorporate those things into your life.

Good or bad, if he or she is constantly comparing you to the ex, or anything for that matter, that should tell you that they're not in it for who you really are. Whether a sign of revenge, jealousy, reassurance, or they're literally trying to mold you into their ex, as brought up on AllWomensTalk, this is not healthy relationship material.

You're so much better than being treated like a rebound if that situation isn't what you want. So let's keep the rebounds on the courts because contrary to what the pop songs preach, love is not a game, people.