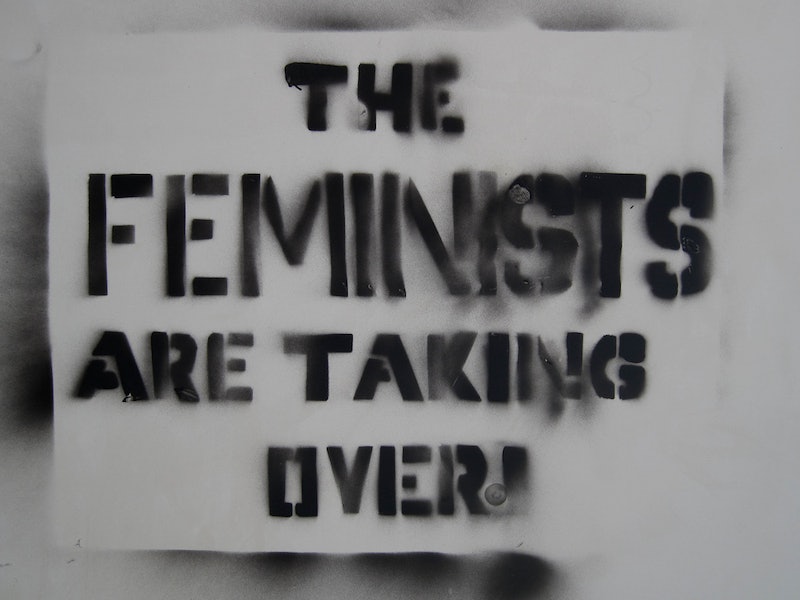 The thorny question of whether men can be feminists has been around since feminism began, and people still have different opinions. It's an issue YouTubers Allison Raskin and Gaby Dunn took on in their Just Between Us video "Can Men Be Feminists?" And their answer is a pretty good way to approach the issue.

The short answer to the "Can Men Be Feminists?" question is: Yes! After all, feminism is a belief in gender equality and the belief that women should have all the same rights, freedoms, and opportunities that men have — and you don't have to be a woman to see the importance of that. But, of course, the long answer to whether men can be feminists is more like: Yes, but there are a lot of things you need to keep in mind.

The thing is that, even though patriarchy does hurt men in many ways — toxic masculinity is no picnic for anyone — patriarchy is still a system that is both built primarily to oppress women and that operates primarily by doing so. Therefore, women are the ones who are in the best position to recognize the big picture in the fight against patriarchy and the ones who should be leading the charge; after all, this is an issue that affects us more than it affects men. However, because men are, thanks to patriarchy, so socially conditioned to see themselves as leaders or important or superior, oftentimes men who are feminists overstep their bounds without even meaning to. Guys who really just want to take on the big problems and get things done wind up accidentally being part of the problem by speaking over women or acting like they know best.

We see this all the time, from male feminists who seem to think the title makes it OK to lash out at women to that one time that Joss Whedon tried to change the very name "feminism" to something less pushy. So, what's a male feminist to do to avoid this trap?

Well, here's some advice from Raskin and Dunn:

Don't Try To Make Yourself A Leader

You can be down for the struggle without being in charge of it. I promise.

Don't speak over other people; learn from them.

When you first get into a movement, it can feel like all of this stuff is so brand new because, to you, it is. But in reality there are other people who have been working on these issues for years. Find them and support them.

And Absolutely You Should Be A Feminist

And you can get even more perspective from the full video.