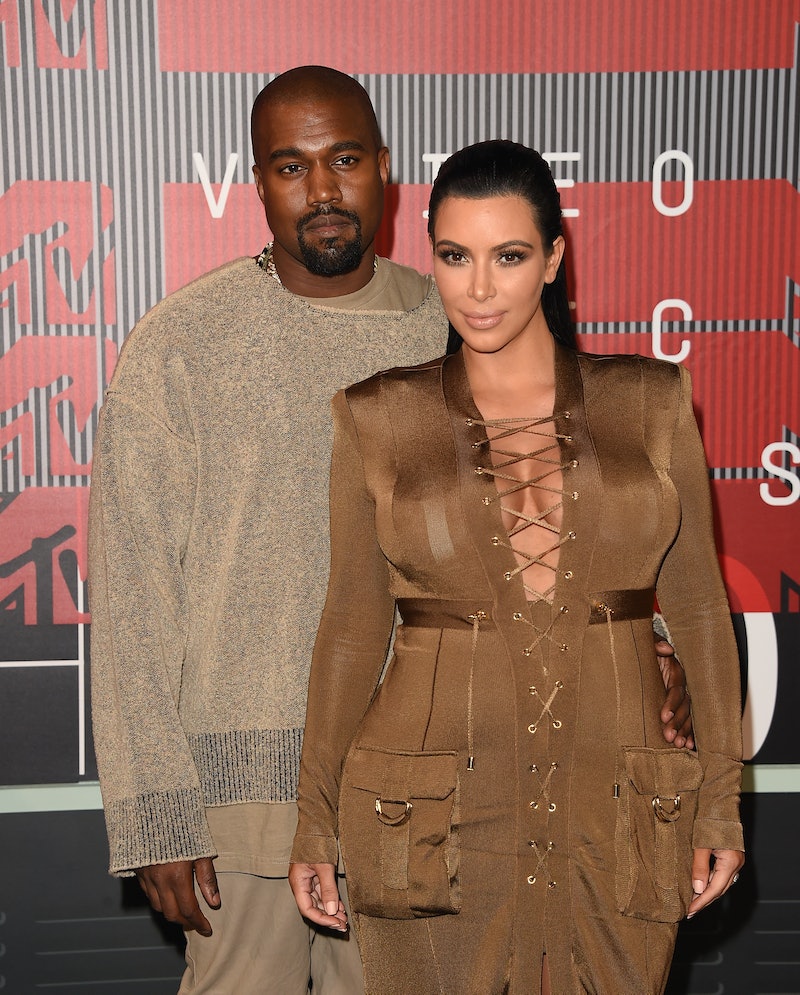 When most celebrity couples fall in love, (I imagine) it goes something like this: paparazzi-stalked dates, romantic vacations, expensive gifts of jewelry and clothes. I don't expect hip hop-singing puppets to be involved — but then again, Kim Kardashian and Kanye West have never been your typical A-list pair. As explained by The Overnight producer Naomi Scott, who worked on Alligator Boots, the show she claims brought the stars together, how West & Kardashian fell in love was due to a strange combination of puppets, rap music, and Princess Leia. I've seen Alligator Boots' Star Wars clip myself, and trust me — it's exactly as great as it sounds, and as cute (if odd) a love story as you'd expect from the most famous couple in the world.

"I was there, the moment they met in the room," Scott tells Bustle. "[West] was enamored with her from the very second he said [Kardashian's] name."

Although the series wasn't the first time West and Kardashian hung out — they'd been friends since 2004, although West admitted in his song "Bound 2" that "I don't remember where we first met" — it was the first time they'd worked together. Scott adds it was West's idea to cast Kardashian in the pilot for the R-rated puppet show, which struck the producers odd considering that Keeping Up With the Kardashians had only just started to air, and she wasn't yet a household name.

Scott says that both West and Kardashian were great to have on the set, calling the "Only One" singer "delightful to work with." As for the reality star, Scott says that Kardashian was "lovely" — and adds that she brought her own air compressor for her makeup. The Kim K of 2008 may not have been a star just yet, but judging from that detail, she certainly was on her way.

Yet if you're trying to figure out how you could possibly have forgotten a show starring the future Kardashian-Wests and puppets, don't stress — Alligator Boots , made in 2008, was cancelled by Comedy Central before its pilot even ran. It really is a shame; the series-to-be was a sketch show created by the rapper Rhymefest, in collaboration with West and Daniel Ellison, and it was shot in Jim Henson's famed Muppet Workshop. It featured puppets interacting with celebrities, all while singing hip-hop songs and discussing rap music. Sadly, poor reviews of leaked production footage reportedly led to the show not getting picked up, according to The Huffington Post, and so the world never got to see the magic that was West as a Stormtrooper attempting to seduce Kardashian dressed as Princess Leia, all while spouting lessons on music and puppets. The year 2008 was a weird time, guys.

"It was such a strange but super fun experience," says Scott.

Clearly, this show sounds incredible — but did the producers of Alligator Boots know they were onto something brilliant at the time? According to Scott, the only focus was on having a "great couple months" making "exciting" TV.

"I wish that it went, but for reasons that are still unknown to me, Comedy Central didn’t move forward," the producer explains.

Although a few videos of the pilot were leaked a couple of years back, they're no longer available on the Internet — but fear not: there is a behind-the-scenes look at the show that you can watch, and it might even be better than the actual pilot. Featuring the KUTWK star spouting lines like "I'm really Kim Kardashian, but I'm supposed to be Princess Leia today," and West getting into heated arguments with puppets, it's TV at its very finest.

As silly as it was, Alligator Boots feels like it actually could've worked, albeit maybe not back in '08; it's the type of quirky, out-there concept that, with the right set of writers and actors, could actually be a hit on today's TV. And considering the star power that West and Kardashian both have now, it's hard to imagine a world in which Alligator Boots wouldn't be must-see entertainment. Still, don't expect a revival anytime soon.

"I feel like Kanye might have moved on," Scott says, adding that the show's concept came mostly from West. "I don’t know if that guy repeats himself."

Yet if it did ever happen, "It would be something," she says. "And I'm sure there’d be a lot of people interesting in working on it and watching it."

Without question. So, Kanye and Kim, if you're reading this — grab those puppets and get back in costume, because Alligator Boots: Revival would be the best thing to come to TV in years.