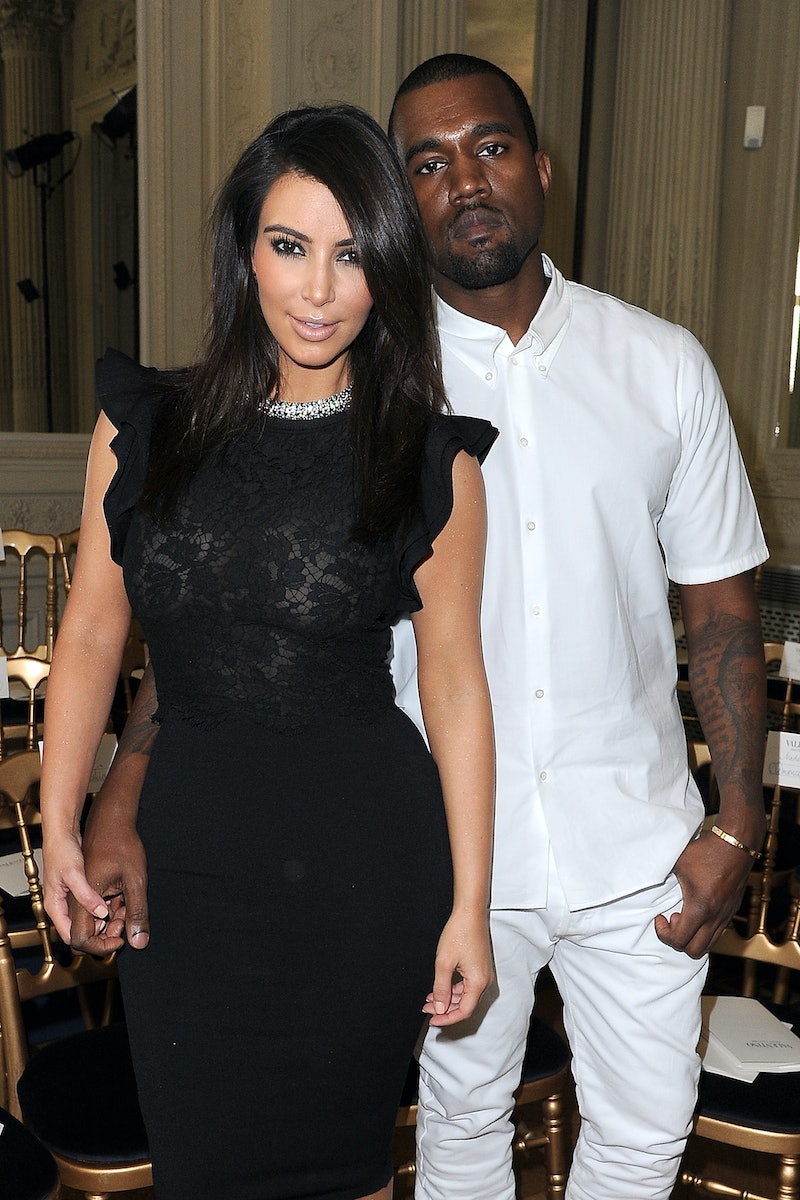 Remember when Kim Kardashian and Kanye West were on the cover of Vogue? There was a pretty presumptuous (yet somewhat accurate) tagline accompanying their photo: #WorldsMostTalkedAboutCouple. Despite being a ridiculously long hashtag, this statement has some validity to it. They may not be the "most talked about" (who measures that anyway?) but they are super popular. This makes me wonder: how did Kim Kardashian and Kanye West meet anyway? Well, it turns out these two go way back. In fact, it took nine years of friendship before Kim and Kanye got engaged. It's kind of like the Ted Mosby and Robin Scherbatsky saga from How I Met Your Mother.

Wow, there's an analogy I never thought I'd make, but it actually fits this situation perfectly. Just like Ted and Robin, it's been a lengthy road (filled with various other relationships, engagements, and marriages) that finally led these two to be together. According to Kim's sister Khloe, there's always been a connection. She said in an interview with The Talk, "He just always was so obsessed with her — in a good way. And I just thought that was so cute, and she was like, 'No we're just friends or whatever.'" See, Kanye is a total Ted Mosby! Even when they were "just friends," he still was obsessed.

To further prove this analogy, here's a timeline of Kimye's relationship illustrated with HIMYM characters. Because why not?

In 2004, these two first met when Kim was working as an assistant to Brandy. Brandy and Kanye were in the studio recording a song together called "Talk About Our Love." This is actually an incredibly awkward situation to look back on, because fun fact: Brandy is Ray J's sister... yes, Ray J from Kim's infamous sex tape. The sex tape was released three years later in 2007.

Anyway, after their initial meeting, they stayed friends and nothing more. That's because Kim was married to her first husband, Damon Thomas, at the time.

A few years later, Kim and Kanye saw each other at a party in Beverly Hills. He realized he really wasn't over her. Their timing was still off, because he was engaged to designer Alexis Phifer and the Kim/Reggie Bush saga was only beginning.

Kim was still with Reggie, and by this point, Kanye was dating Amber Rose. His engagement with Phifer didn't work out. But when Kim and Kanye saw each other at a fashion show in February, his crush continued to grow.

By 2010, Kim and Reggie were dunzo. Same for Kayne and Amber. Apparently in December of this year, Kanye assisted Kim with her music video. Yeah, remember when she attempted a singing career? It was almost as bad as Robin Sparkles' single "Let's Go To The Mall."

In April, Kim married Barney Stinson — I mean, Kris Humphries. As we all know, it didn't last very long. They filed for divorce on Halloween of that year.

Once Kim and Kris were over, Kanye finally made his move. In March, the two were spotted sitting front row at a fashion show. This marked the beginning of the Kimye Empire. To let everyone know just how serious they were, she began wearing earrings with his initials. Then in December, they shared very exciting news: they were having a baby together.

In June, North West was born. Then a few months later in October, the pair announced their engagement. Yup, Kanye's extravagant orchestra proposal. I wonder if someone played a blue french horn...

Both Ted and Kanye have a way with words, don't they? Although Ted is a bit more eloquent. Their love finally became official in May when Mr. and Mrs. West tied the knot in Florence, Italy.

So there you have it, kids. One day Kanye will be telling a bedtime story to North (and potentially her future siblings), saying: "And that is how I met your mother."