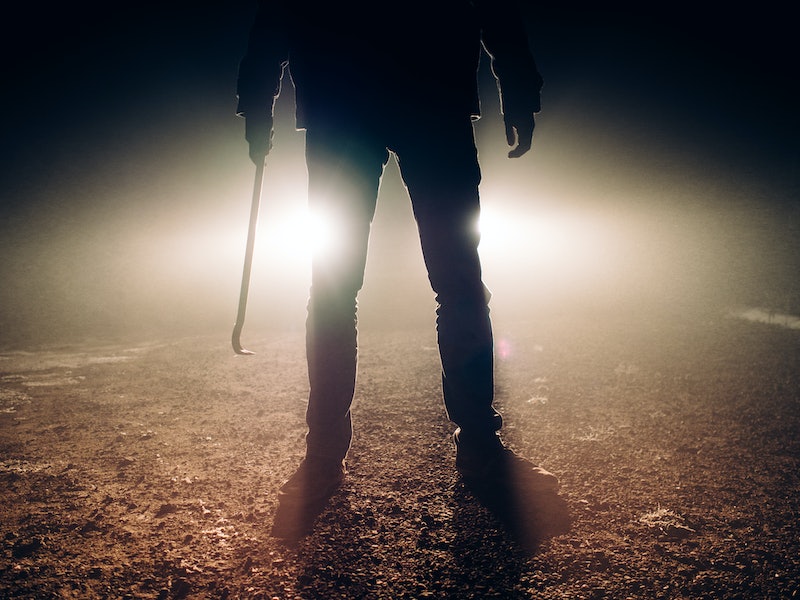 Fall is the season for scares, with everyone whipping out their creepy Halloween stories. It's like the Olympics for fear fanatics, except no one wins anything. Come fall, horror films take over the theaters and scary shows saturate the TV programming. Drugstores are draped in spooky plastic decorations ranging from spider webs to slow-mo laughing witches. Grocery stores are pushing old products rebranded with orange and black packaging. Your social media feeds are flooded with ironic costume ideas, “real” ghost stories, and “paranormal” clips that have made their way to YouTube. A few hoaxes will make their way to the local news, and you’ll probably participate in an Internet quiz meant to tell you what you should be for Halloween based on your movie and book preferences.

But aside from all the fun, there is a dangerous buzz in the air on Halloween night. Costumed, inebriated adults are extra fearless. There's a power that comes with disguise and an uninhibited mischief that comes with the holiday. So it's no surprise that some of the scariest stories happen on Halloween — not silly, jokey, playful scary stories, but downright horrific, terrifying, and tragic ones. For those of you who get a sick thrill out of being seriously frightened, I've put together a list of six of the creepiest things that have actually happened on Halloween. All of these stories are documented, confirmed stories. No urban legends, no spook-happy tales, just cold blooded truth.

A few days before Halloween 2005 in Frederica, Delaware, decorations were abundant. The town was ready for the holiday, with cobs webs, Jack-O-Lanterns, rubber monsters, and one very grisly hanging body amid the decor. As it turns out, a 42-year-old woman committed suicide by hanging herself from a tree in a very public residential area. The body hung 15 feet high without alarm for hours before residents started to notice that the body was not rubber-made.

On Halloween night, the Indiana State Fairgrounds Coliseum hosted a "Holiday on Ice" skating exhibition. Unbeknownst to the attendees, a propane tank leaked through the entire performance, filling the unventilated room with doom. As the skaters prepared for their pinwheel finale, the gas made its way to an electric popcorn machine, igniting a massive explosion killing 75 people. The scene was considered by the fire marshal to be the most gruesome event the town had seen.

Mrs. Damman left her two-year-old son Stevie to watch her seven-month-old daughter on the street, while she went shopping. When she emerged from the store, the toddler and the baby were nowhere to be seen. A few blocks away the stroller was found with her little girl unscathed. Stevie however, was nowhere to be found. There were rumors that Mrs. Damman was abusive, though no official reports were filed. To this day, Stevie or his remains have not been found and no new information has been added to the case. Was it a kidnapping? Murder? A runaway? An abuse cover-up? No one knows.

Karl Jackson and his girlfriend were driving through the Bronx on Halloween night when they were aggressively egged by a group of teenagers. Karl got out of his girlfriend's car to reprimand the teenagers, expecting them to run off. Instead, 17-year-old Curtis Sterling pulled out a gun and shot Karl in the chest. Karl was killed instantly. Because Sterling was a minor, he is serving only a 20 year prison sentence.

A disabled war veteran was parked outside of a Florida fast food restaurant in his wheelchair on Halloween night. When a Marine dressed in a tutu saw him, he assumed it was a gag. Offended and enraged, the Marine brutally attacked the half-paralyzed vet, beating him to the ground and knocking him unconscious. It was until the police came to arrest him that he learned of his mistake (not that attacking anyone in that brutal manner is OK, regardless of whether or not he thought he was being provoked).

On Halloween night, 55-year-old Chicago resident Ledell Peoples got into a deadly altercation with his girlfriend, 49-year-old Maria Adams. Adams allegedly took a bag of Peoples' Halloween loot, sending him into a violent rage. Peoples took out a knife and repeatedly stabbed Adams, killing her. Upon arrest, Peoples attempted to defend himself by explaining that his candy was taken. As you can imagine, the legal system was not all that sympathetic. He was arrested on a two million dollar bond.

More like this
The Guide To “Witches Stairs” & Why They’re Actually Great For Small Spaces
By Emma Garza
13 Summer Solstice Quotes To Celebrate The Longest Day Of The Year
By Sadie Trombetta
The Summer Solstice Spiritual Meaning, Explained
By Jessica Booth and Brittany Beringer
18 Father's Day Poems That'll Make You & Your Dad Tear Up
By Michelle Regalado and Siena Gagliano
Get Even More From Bustle — Sign Up For The Newsletter