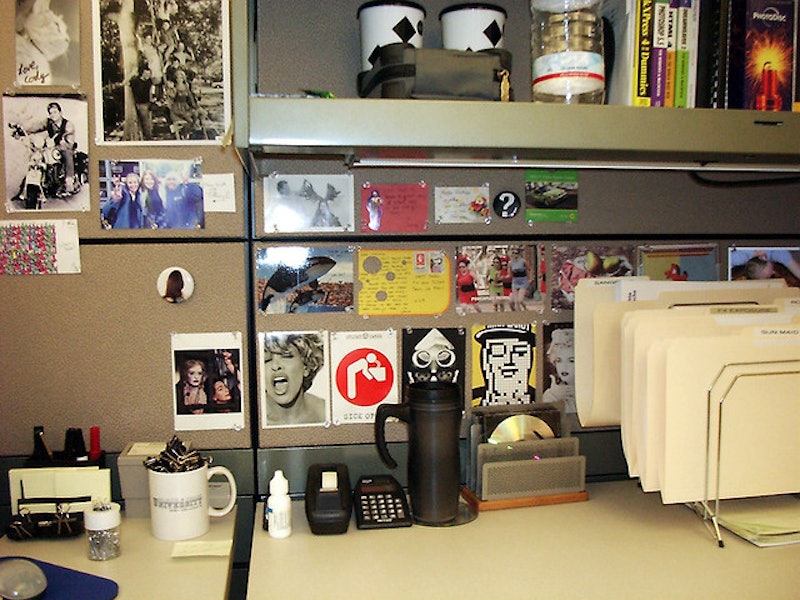 The '90s were a fun time to come of age, to be sure. But our childhoods weren't solely about leisure activities like playing Bop-It with our BFFLs and making glow-in-the-dark Mr. Potato Head illustrations using our Lite Brites. Well, I mean, they were — but we also picked up some pretty invaluable life skills that wound up making us much better at our chosen occupations further down the road. There's no doubt about it: There are tons of ways that being a '90s kid made you better at your job.

This revelation occurred to me last week, when I stumbled across a comment thread on Facebook in which several "2000s kids" complained about how the workplace should change to accommodate the needs of a more tech-savvy generation. It was then it dawned on me that, compared to kids born in the decades after us, being a '90s kid is an advantage in today's workforce. And it's not all tech-based, although the fact that many of us straddle the era before home computing was a thing and after the Internet became an everyday necessity certainly accounts for part of it. Between the marathon tree climbing sessions and failed attempts at the culinary delights of the Easy-Bake Oven, here are a few things we picked up along the way.

When we were growing up, the Internet was merely a fledgling — a little IT baby waiting to get its superhighway wings. There was no Google. There was no 4G. I'm not even sure we had any G's at all. I'll tell you what we did have, though: The dinosaur that was AOL dial-up, which would net you one web page roughly every three to five minutes. Instant gratification was not in the cards, so we learned to multitask in the mean time.

Should I buy the Backstreet Boys album or wait for Boyz II Men's new music to drop? Do I spend my afternoon with the Tanner family by tuning into Full House, or do I squeeze in some QT with cutie Zack Morris and watch Saved By the Bell instead? Big League Chew or Fruit Stripe Gum? When it came to making decisions in the '90s, the struggle was so real, my friends. But whittling down those nearly impossible choices back then strengthened our quick-thinking, making us bona fide badasses when it comes to making tough calls at the office.

Younger generations in the workplace today have only to hit a button before solutions come springing forth or before Google spits out the answer to whatever conundrum they are facing. But '90s kids? Well, we learned to be creative. We discovered that rubbing a scratched CD with a banana peel — or licking it, blech— would miraculously make it work again. And we unveiled the sorcery that is blowing on stubborn electronics to make them work again (thanks, Nintendo!). In general, '90s kids come from the "exhaust all possibilities before you admit defeat" school of thought.

4. The Mechanics of Currency

Many an allowance penny was made in the pursuit of Pogs and Pokemon cards — the holiest of all schoolyard swag, because everyone knew she who held the most was a hero. Heck, if you were in possession of a holographic Charizard, you were a playground goddess. So, not only did we fully grasp the concept of working to accrue the funds necessary to ensure we didn't become social outcasts, but we also developed a highly evolved bartering system. Unbeknownst to our parents, obviously.

You don't have to worry about a sense of entitlement in the workplace with '90s kids. Thanks to movies like Office Space, we have always understood that our career paths may land us in a cubicle of perpetual discontent or one TPS report away from going Michael Bolton on an office printer. Bonus? Since we always seemed to wind up in a shack when we played M.A.S.H., we similarly never expected to make a million via our day jobs.

6. The Logistics of Digital Communication

I know what you're thinking — '90s kids are a little behind the technological curve in context of the young generation. But not so fast, young bucks! You can thank us for Gchat, Facebook Messenger and the other myriad ways you now correspond with your coworkers and everyone else under the sun. Why? Because we perfected, er, mastered AOL Instant Messenger and we've got the former funky screen names to prove it (say hello to VerbotenSylph... I KNOW).

7. The Importance of a Trusted Advisor

These days, the workplace can be so cutthroat — which is why it is more crucial than ever to have a sage mentor in your corner. We know this to be true, because we had the benefit of growing up hearing the wise tutelage of Mr. Feeny on Boy Meets World or soaking up the life lessons delivered by Wilson (or at least the upper third of Wilson's face) on Home Improvement. And if there is a shortage of advice-dispensing entities in the workplace, we have a fail safe courtesy of our '90s upbringing: Simply align yourself with the woman in your office who reminds you the most of Topanga Lawrence. Topanga would never steer you wrong.