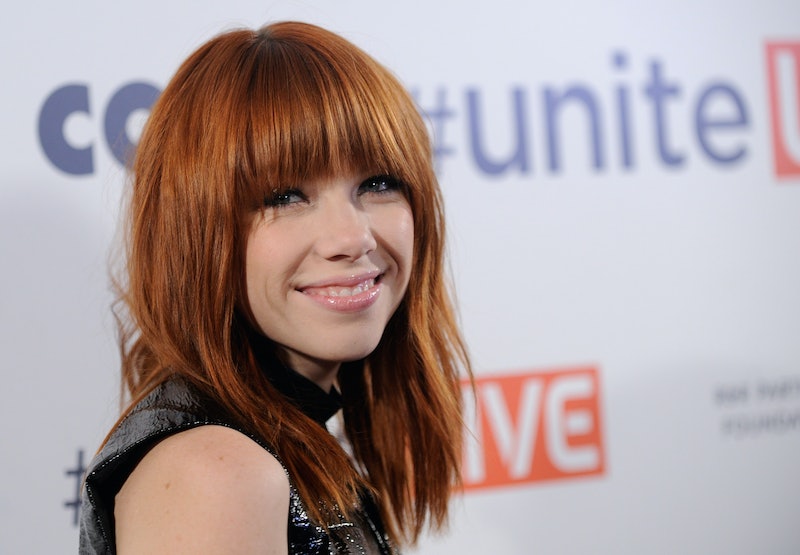 FOX is looking to get in on the live musical game pioneered by NBC with its broadcasts of The Sound Of Music and Peter Pan with a production of the popular movie musical Grease. The cast already sounds amazing: Dancing With The Stars pro Julianne Hough as Sandy, Broadway heartthrob Aaron Tveit as Danny, High School Musical vet Vanessa Hudgens as Rizzo, and Scream Queens breakout star Keke Palmer as Marty. Now FOX is swelling the ranks of its Pink Ladies and T-Birds, casting Kether Donohue and David Del Rio (both of Pitch Perfect) as Jan and Putzie, respectively, and Carly Rae Jepsen as Frenchy in Grease Live. But can the Canadian songstress act?

Actually, this won't be the first time on TV for the young woman behind the global sensation known as "Call Me Maybe." Apart from her debut as a contestant on Season 5 of Canadian Idol (where she came in third), she has also appeared in episodes of 90210 and Castle, been the special guest on episodes of Saturday Night Live and Comedy Bang! Bang!, and was even a "notable audience member" for Comedy Central's roast of Justin Bieber (a fellow Canuck import) earlier this year. But all of those experiences have one thing in common: she was always playing herself. Grease Live will be Jepsen's first time portraying a fictional character onscreen.

So is there any reason to feel confident in the singer's ability to execute a scripted role? Actually, there is! In Feb. 2014, Jepsen joined the cast of the Broadway revival of Rodgers & Hammerstein's Cinderella, taking over for Tony nominee Laura Osnes in the title role. Theater critics don't tend to re-review shows when cast members rotate, so there's no objective measurement of the quality of Jepsen's performance, but the pop star's presence helped boost ticket sales by 25 percent in the show's 49th week on the Great White Way, and theatergoers who use Twitter seemed enraptured by her, if the musical's promotional materials are any indication.

It's not only Jepsen's Broadway experience that will come in handy for her role in Grease Live, but also her prior experience with the show itself. The singer previously revealed that she had participated in a high school musical of the popular high school musical... although she declined to divulge which role she had played. (Probably Sandy, let's be honest.) Coincidentally, she also performed in The Wiz in high school, so maybe she should also be expecting a call from NBC sometime soon?

Jepsen isn't the only talented singer FOX has announced is joining the cast of Grease Live, either. English pop star Jessie J has also been recruited to kick the broadcast off with a performance of the movie's theme song, "Grease Is The Word" (originally sung by Frankie Valli).