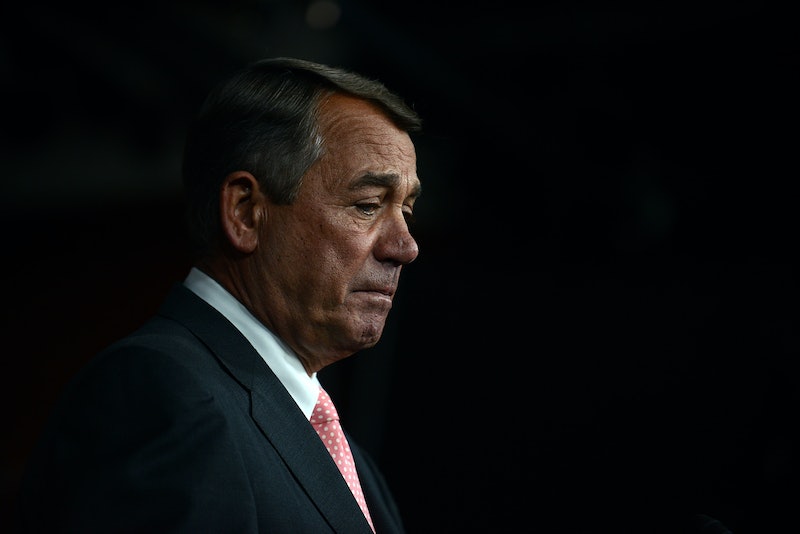 In the wake of the shooting at Umpqua Community College in Roseburg, Ore., politicians like John Boehner and Jeb Bush have expressed their condolences to the families, friends, and peers of those lost in the morning's events. Ten individuals have been confirmed dead; the number of injured appears closer to an additional 20, though precise numbers are still being confirmed. Local news sources have placed the death toll above 10, according to an early report by The Atlantic, and the New York Daily News has reported 15 casualties. NBC has now put the number at 13. While accounts of the shooting are still coming in, politicians and candidates for the upcoming elections on both sides of the aisle — especially the majority of those running for president — have taken to social media to offer prayers and support for those immediately affected by the shooting.

But responses to these condolences and prayers have primarily expressed outrage at how the perceived loose gun control in the United States has precipitated yet another catastrophic school shooting. This criticism is particularly vehement towards politicians who are seen as having stalled efforts to curb gun violence in the past, particularly in the wake of Sandy Hook. The overwhelming sentiment, though, is a mixture of tentative hope that this disaster might finally incite some change — and frustration that, once again, it might not.

As Twitter has expanded as a method for politicians to communicate with constituents, their tweets have historically been written by the press teams behind them. It's incredible to see how many politicians have personally responded through social media, as indicated by the shorthand of tweets signed with initials or first names.

Cicilline updated his response with a call to action several hours later.

Honda later updated his statement with a more overtly political message, demanding that lawmakers proactively work to prevent yet another school shooting.

Senator Wyden was "visibly shaken" as he returned to his office while refusing questions from reporters asking for his response, according to a local Fox affiliate. He responded with this simple message via Twitter.

Blumenauer's expansion on his remarks came just hours later, echoing the assertions of other politicians that "thoughts and prayers," while sympathetic, will not fix the rampant gun violence in the United States.

O'Malley later updated his statement with a more urgent call to action that spoke out against the "thoughts and prayers" formula that many candidates and politicians had put forth, a category that includes his earlier statement.

Clinton's statement was one of the most overtly political, personally promising to take concrete action to amend gun control laws.

Connecticut Senator Murphy responded to the shootings with a sequence of tweets decrying the role that lawmakers play — or that their silence plays — in such tragedies.

According to KGW's John Tierney, the White House has reported that President Barack Obama has been informed of the events in Umpqua and will stay apprised of the situation.

(UPDATE: The White House Twitter account live-tweeted the President's press conference regarding the shooting, posting quotes, images, and videos from the event to the account. "We are the only advanced country in the world that sees these mass shootings every few months," he said. "It cannot be this easy for someone who wants to inflict harm to get his or her hands on a gun.")

Vice President Joe Biden also weighed in, expressing his condolences to the families of those who died in the shooting.

Earlier Thursday, prior to news of the shooting, Obama tweeted about efforts to prevent gun violence on a state-by-state basis. He linked to a donations page posted about a week ago, in an unfortunate coincidence of timing.