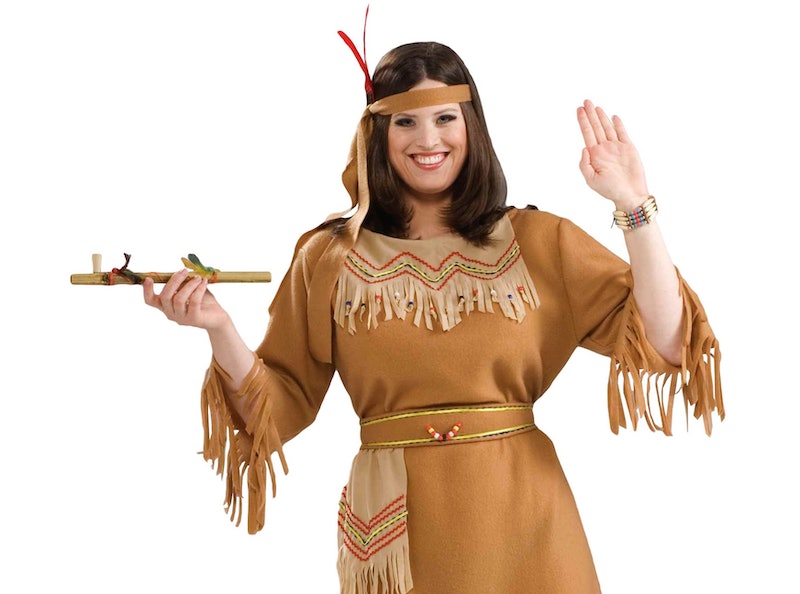 If you grew up in the United States, odds are that you've witnessed your fair share of culturally appropriative Halloween costumes. Even if you've personally never rocked a Native American headdress or a "gypsy costume" on the last day of October as a child, you probably know someone who did. Now that we're all grown up, however, we are hopefully more aware of racism and our nation's history of colonizing and oppressing marginalized peoples, including Native Americans, people of color, and the trans/queer populations.

Of course, not everyone — adult or otherwise — is aware of their own racist tendencies. Many Halloween-themed stores, for instance, continue to sell us costumes that are inarguably politically incorrect and disrespectful to the very identities they're portraying. The most common argument I hear in favor of such outfits is that people feel "inspired" by other cultures, or believe a Bindi just looks aesthetically pleasing. Celebrities like Katy Perry (who's appropriated Japanese and Egyptian culture, to name a few) and Selena Gomez (who used to wear Bindis often) further back up cultural appropriation with these actions and subsequently set the trends. It's important to remember that cultures are not trends, though, and a white person wearing a kimono can be problematic no matter how much Japanese culture "inspires" them.

Here are some of the most problematic costumes to avoid this year (and preferably always).

As many of us know, Spirit Halloween has notoriously made a costume inspired by Caitlyn Jenner's Vanity Fair cover. Jenner didn't find the costume to be offensive herself, but for many non-binary individuals, the opposite could be true. Speaking as a non-binary person, I find this costume distressing not only because it's likely being modeled by a cis man, but because it turns trans identities into a dress-up game.

It could be argued, of course, that the costume is simply paying tribute to Jenner, like any Marilyn Monroe one would. Realistically, however, there don't seem to be that many new costumes created every year honoring of-the-moment women in pop culture, let alone costumes that recreate specific magazine covers. The costume is using Jenner's coming out and history-making cover and commodifying trans identities. Change.org even created a petition for Spirit Halloween to stop producing and selling the costume, saying:

"To make a costume out of a marginalized identity reduces that person and community to a stereotype for privileged people to abuse. In this case, if you follow through with production of a Caitlyn Jenner costume, cisgender people will purchase it to make fun of her and our community."

There was backlash from the queer and trans communities online as well, with some citing the costume as transmisogynist and disrespectful to the struggle of all trans people.

Also popular at music festivals, headdresses and iffy recreations of Native American garb are in relatively high demand during this spooky season. However, this costume choice is often insensitive not only to the history of Native populations, but to the present difficulties those populations face. According to Indian Country , a national media platform for Native voices and issues, the Halloween costumes modeled after traditional Native American attire "reminds us of what we’ve lost. Even historically-accurate 'costumes' trivialize the Native American genocide, and perpetuate the harmful stereotypes that fueled it."

Hypersexualizing Native women (which many of these costumes do) also mocks the increased rate of sexual assault against Native American women in the country. According to Amnesty International, Native American women are 2.5 times more likely to be sexually assaulted or raped than other women in the United States, and 86 percent of reported cases of sexual assault towards Native women are committed by non-Native men.

In case it's still not clear, Katy Perry's choice to dress in a geisha-inspired outfit to the 2013 American Music Awards was definitely offensive. Despite her love for Japanese culture — which is apparently reduced down to stereotypical portrayals and summed up by a single profession within Japan — this outfit is not OK. As Jeff Yang wrote for The Wall Street Journal:

"The thing is, while a bucket of toner can strip the geisha makeup off of Perry’s face, nothing can remove the demeaning and harmful iconography of the lotus blossom from the West’s perception of Asian women — a stereotype that presents them as servile, passive, and as Perry would have it, 'unconditional' worshippers of their men, willing to pay any price and weather any kind of abuse in order to keep him happy."

Unless you celebrate the Day of the Dead and were raised in Mexican culture, this costume is not appropriate. Dia De Los Muertos is a separate holiday from Halloween, meant to honor deceased loved ones and adopting skeleton makeup as a celebratory thing rather than a frightening one. According to feminist blogger April Nadia Munoz, "This celebration is not something you can buy and decorate with because of the fashion, it has collective and historical significance to the identities of many people." If it's not your holiday, attempting to participate in it is cultural appropriation.

Celebrities like Selena Gomez and Gwen Stefani are huge fans of rocking a Bindi and even the traditional Sari. Possibly because of what we see in Bollywood movies and how we are taught to perceive individuals from South Asia, dressing in this manner might be considered "cool" and "exotic" (which is what many of the Indian-inspired costumes on the market are described as). It seems that the years of colonialist abuse by white European powers was somehow lost in the shuffle, as well as the concept of appropriation, because people continue to wear Indian and Hindu garb and cultural signifiers, like the Bindi. As Jezebel writer Isha Iran explained:

"It takes from Hindu culture on American terms and negates the Hindu aspect through ignorance and exoticism of an 'alluring foreign culture.' Bindi trend-sporters aren't celebrating a cultural symbol. They're celebrating themselves and the thought-of-it-first appeal of disposable fashion."

Besides the obvious cultural appropriation issue surround this costume, the term "gypsy" is a derogatory one, often used to describe the Romani, groups of people intensely hated and perceived as lower class individuals (especially in European countries). According to Cracked,

"[...] Long before that term meant a group of odd people who roam the countryside running scams, it was an ethnic slur for the Romani people who immigrated from Eastern Europe. The term 'Gypsy' evolved from the habit of calling the people Egyptians, because they sort of looked Egyptian and the locals were apparently too shy to ask the people where they were actually from."

Any costume called "Gypsy" perpetuate stereotypes of the Roma being strange and mysterious thieves that dress like fortune tellers, arguably glorifying their marginalization in the process.

Katy Perry dressed as an Egyptian goddess for her "Dark Horse" video, and went pretty over the top with her stereotypical portrayal of Egyptians. In a way, she arguably perpetuated the American habit of portraying Egyptian people as very fair-skinned (or, you know, white) in popular culture.

This Halloween, let's vow to be more conscious of our costume choices. By analyzing the historical and cultural significance tied to certain clothing, we can then decide whether or not we have a right to claim these looks for ourselves.

More like this
8 Charities To Donate To During Black History Month
By Alexis Morillo
These Artists Are Reimagining Black History Month To Create A Better Future
By Katie Mitchell
42 Black Owned Fashion & Beauty Brands To Support Today & Always
By Mekita Rivas, Shea Simmons, Kui Mwai and Dominique Norman
8 Things You Can Do To Appreciate Lunar New Year
By Elizabeth Tsung
Get Even More From Bustle — Sign Up For The Newsletter
From hair trends to relationship advice, our daily newsletter has everything you need to sound like a person who’s on TikTok, even if you aren’t.