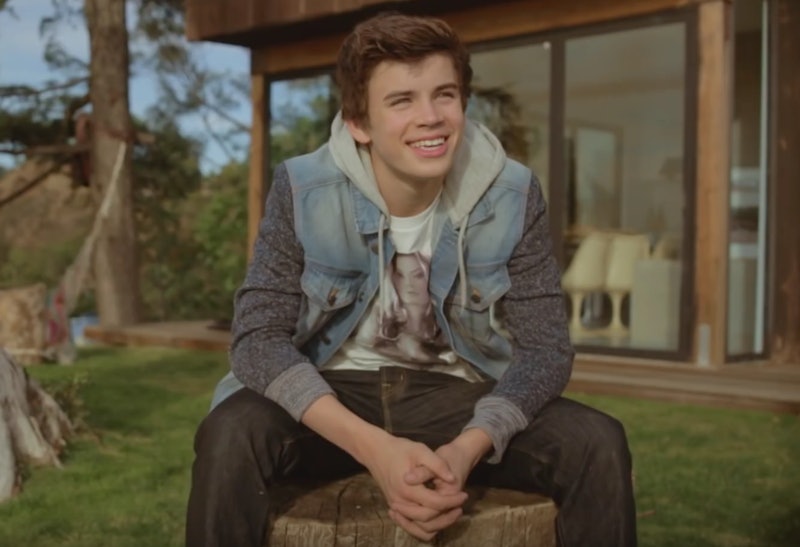 If I was famous, my biggest fear would not be the hoards of paparazzi at every corner. It would be the elementary school photos that the Internet would eventually discover. While some people are lucky enough to never experience the difficulty that is sixth-grade awkwardness, I was not one of those kids. But, for some people, pulling out the childhood photos isn't painful. In fact, it's kind of adorable. And that's the case for 15-year old Vine star Hayes Grier, who is a current contestant on Dancing With the Stars. After all, his Instagram is plastered with throwbacks of him and the rest of the Grier family, including siblings Nash, Will, and lil' sis Skylynn Elizabeth. And his 4.3 million Instagram followers are not complaining — Hayes Grier's childhood photos are absolutely precious.

Not only are most of his #TBTs the definition of family squad goals, throwbacks are a great way for Grier to share a little more about himself before internet fame took over. So even though his hilarious Vines offer insight into his personality, photos really are worth a thousand words to show that Grier is more than just a heartbreaker taking over the Dancing With The Stars stage. He's also huge family guy, a big sports fan, and more. So learn a little more about Grier and check out 11 of his best #TBTs in honor of his time on Dancing With the Stars.

This photo makes it clear Grier could have been a Gap baby. Then again, the requirements for starring in a Gap Baby campaign are pretty minimal — you just have to be an adorable baby.

I have entitled this one "Hayes on a Horse," and it's definitely Grier's funniest #TBT. Either he's imitating the horse or he's terrified, and I'm going with option two. Thank you, Grier, for this gem.

This throwback definitely pulls on my heartstrings a little. You can tell he's already so in love with his little sister. After all, every girl with an older brother knows what it's like to have a built in protector and best friend all at once. And Skylynn has three, so I think we can say she's doing pretty well.

Does anyone remember that show on the Esquire Network called Friday Night Tykes? When I look at this photo, I imagine Grier on the show, running down the field for a touchdown. Side note: It's also precious to see the team name Giants plastered on his helmet, considering he's so small.

When I was a kid, dressing up and acting out American Idol was one of my favorite activities. Seems like dress up in the Grier household worked a little differently, but it was way cuter. I mean look at the hats.

Even though "Hayes with a Horse" takes the spot for funniest photo, this one is a solid second. This photo screams 2000's childhood. I remember loving every visit to Target because they had the best toy aisle. And, every visit often ended up at the snack counter, where popcorn and a Slurpee were mandatory.

While the way I looked has changed slightly over the years (I'm thinking of you, fifth-grade self), some people look the same throughout their childhood. Grier is one of those people. It looks like this photo of him could have been taken yesterday and his head was simply photoshopped on a smaller body.

So this isn't Grier's own #tbt photo, but one from a childhood friend. Turns out he didn't just play football, but he played basketball as well. And he must have enjoyed it just a little— I mean look at that big grin.

This photo can't help but make you smile for all the right reasons. Everyone has their own relationships with their siblings, and it's good to see that the Grier family has always been close.

While these may be the best of Grier's current throwback photos, here's hoping he adds even more to the list in the future. I'll be sure to keep an eye out on Thursday.