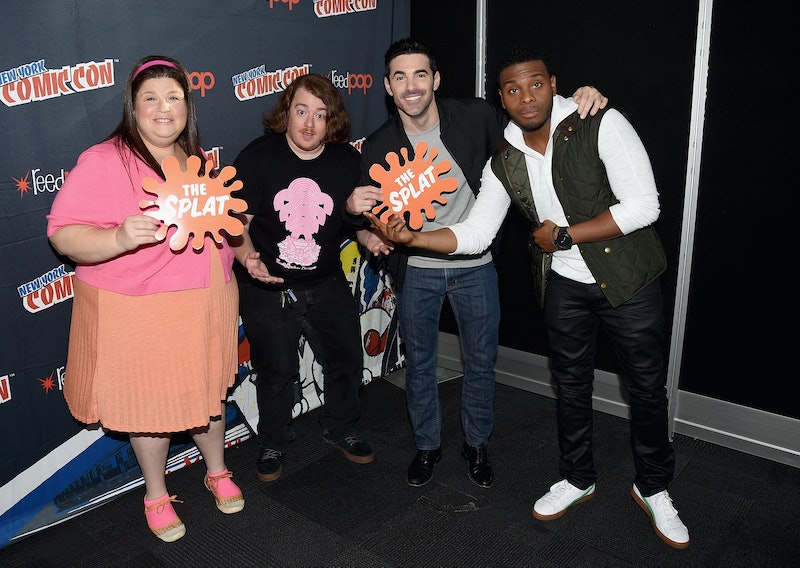 Nickelodeon during the 1990s was the golden era of children's programming. There were epic game shows like Legends of the Hidden Temple and Figure It Out that every kid wanted to desperately appear on. I devoured Nick cartoons like Rugrats, Doug, and Hey Arnold like they were potato chips — I could never watch just one! Morning till night, Nickelodeon was the best TV around. So when I heard there'd be The Splat, a rotation of classic Nickelodeon shows on TeenNick every night, I was thrilled, and while I was excited to see all the shows come back, I was most excited for All That . And to hear not only that the show would return, but that the cast of All That had a reunion at New York Comic Con? It was too good to handle.

Because it's impossible to forget just how great All That was. The series, which could easily be called "SNL for children," was a sketch comedy show featuring a gang of up-and-coming (read: young) comedians. For the uninitiated, don't let the young age of the actors discourage your viewership — All That is hilarious. And in support of The Splat, some original All That cast members were at Comic Con this past weekend dishing on behind-the-scene secrets and reenacting the show's best skits. Lori Beth Denberg, Kel Mitchell, Josh Server, and Danny Tamberelli were all in attendance. Basically, this mini-reunion was my wildest dreams incarnate.

This got my mind racing: What have those cast members been up to? Where is the cast from All That now? I simply could not stand another moment without answers to these really important questions, so I took to the Internet to find out.

Josh Server was best known for his characters Detective Dan, Earboy, and Bernie Kibbitz. Server was also the only cast member to appear in all six seasons of the original show. After it ended, he went on to host Oh Yeah! Cartoons and has made guest appearances on other Nick shows like Drake & Josh, Ned's Declassified School Survival Guide, and Sam & Cat.

Kel Mitchell was most famous for playing the character Ed on All That and in the Good Burger movie. His other All That characters included Peter from "Life with Peter and Flem" and as the Repair Man-Man-Man-Man. After All That, Mitchell starred in Kenan & Kel with Kenan Thompson. He also appeared in the films Mystery Men and Like Mike 2: Streetball. He currently stars on the Nickelodeon live-action gaming sitcom, Game Shakers.

Arguably All That's most successful alum, Bynes got her start on the third season of the sketch comedy show. "Ask Ashley" and "What-everrr" were considered her memorable skits. When All That ended, Bynes went on to star on The Amanda Show. She later went on to appear in a slew of successful feature films including What a Girl Wants, Hairspray, Easy A, and She's the Man. More recently, Bynes has been making headlines for her erratic behavior and her "retirement" from acting.

Kenan Thompson played Pierre Escargot and Superdude for five seasons of All That. He also played Dexter Reed in the Good Burger film. When he left All That, Thompson starred in Kenan & Kel and was Fat Albert in 2004's Fat Albert film. Thompson joined the cast of Saturday Night Live in 2003 and remains a senior cast member there today.

My favorite All That actor (and Figure It Out panel member), Lori Beth Denberg appeared in four seasons of the show. She was most well-known for her roles in the "Vital Information" sketches. After her stint on All That, Denberg had small roles in the Good Burger film, Dodgeball: A True Underdog Story, and Malcolm in the Middle. She most recently guest-starred on Workaholics.

Danny Tamberelli was an All That cast member for two seasons after starring in the Nickelodeon series The Adventures of Pete & Pete. He has since graduated from Hampshire College with a bachelor's degree in interdisciplinary arts and regularly performs with his sketch group, Man Boobs.

I often forget that funnyman Nick Cannon got his start on All That, but he did! Cannon appeared in seasons 5 and 6 of the series. He later made the jump to feature films with starring roles in Drumline and Rollbounce. He is currently the host of America's Got Talent and was previously married to Mariah Carey.

Gabriel Iglesis is another person I completely forgot was on All That. Iglesias appeared in Season 6, which was the original show's final season. Since the show ended, he has competed on The Last Comic Standing, and he hosts and produces Gabriel Iglesias Presents Stand Up Revolution on Comedy Central. He also appeared in Magic Mike.

Walking down memory lane has made me realize that I am in desperate need of more All That in my life. Who loves All That? I love All That.