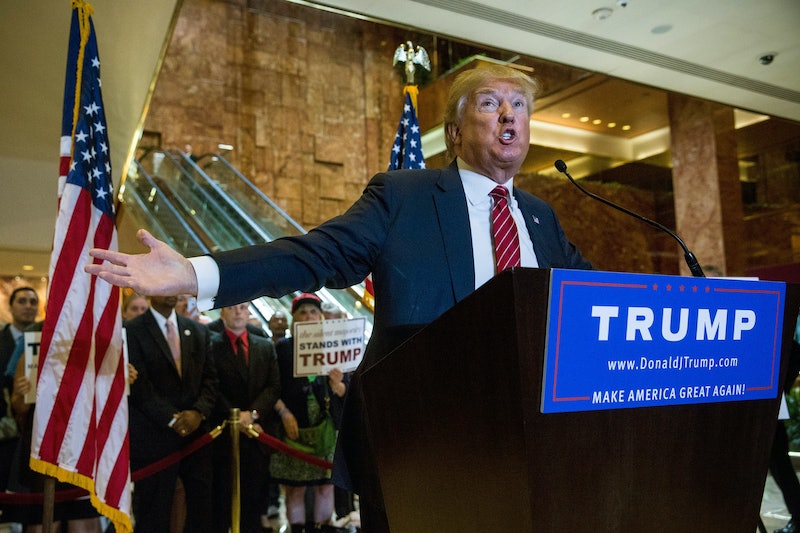 Pop culture and presidents go together like peanut butter and jelly — especially in recent years. The most famous example for the millennial generation is Barack Obama, who has not only appeared on talk shows like The Ellen Show, Late Show with David Letterman, and The Today Show, but also on platforms such as Between Two Ferns and The Colbert Report. Among the next generation of presidential candidates, we have Hillary Clinton appearing in an interview with Lena Dunham, and, of course, Donald Trump of The Apprentice throwing his hat into the ring. On Tuesday, it was announced that Trump would be hosting Saturday Night Live, and while it's not the first time he's ever hosted, it is the first time that the stakes have been this high.

Whether you're a Trump supporter or not, you have to admit that the guy is in a bit of a precarious position. Unlike the career politicians he's up against, he's best known for his offensive Twitter rants, his appearances in TV shows and films, and of course, his previously regular gig as the host of the The Apprentice. People are as used to Trump as a character as they are used to him as a person, and it can be hard in that kind of situation to make the switch in the public consciousness from entertainment figure to political leader. Just ask Arnold Schwarzenegger, once known as The Governator — then ask me how ironic I find it that Schwarzenegger is replacing Trump as host of Celebrity Apprentice.

That's why it's different for Trump to be appearing as the host of Saturday Night Live than it would be for Bernie Sanders or Carly Fiorina. Seeing a career politician on an entertainment program gives them a relatable bent that makes them seem more accessible — or dare I even say "hip" — to an audience of somewhat apathetic millennials who care more about what's going on on Keeping Up with the Kardashians than they do about who is running for control of the country. Seeing them take a moment away from serious matters of state and national law in order to laugh at themselves, and make us laugh with them, makes them seem more human and empathetic and less like, well, politicians. However, Donald Trump doesn't need that to be added to his image. In fact, he needs to take a step away from that.

Much of what Trump has said in his campaign so far has been tone-deaf at best and downright offensive at worst, making it difficult for people who mostly only know him from Celebrity Apprentice to really take him seriously as an actual candidate. As many a late-night talk show host has joked, it might be entertaining to watch Trump now, but the idea of him actually running our country is a terrifying one — particularly because of how likely it is. His return as the host of Saturday Night Live might be a good way for him to be in on the joke, to seem more humble and more human, but it also just reinforces what people have already been thinking: that Trump is better associated with entertainment than with politics.

There's always a chance that I'm being far too maudlin. After all, it's just Saturday Night Live. It's not going to make or break Trump's career — at least, nowhere near as much as Trump himself can make or break his own career. However, it does seem like a risky move for the businessman-turned-entertainer-turned-presidential-candidate to be undertaking at such an early and tenuous time in his campaign. And, honestly, it either makes Trump incredibly brave, or incredibly overconfident. I suppose we'll find out which on November 7.

More like this
'Waterloo Road' Is Back, With More Than A Few Familiar Faces
By Sam Ramsden and Vivian Iroanya
Matt Hancock Broke a Major Rule With I’m A Celeb
By El Hunt
The First Trailer For 'That '90s Show' Includes So Many Nods To The Original Series
By Jack Irvin, Alyssa Lapid and Grace Wehniainen
Elizabeth Debicki On Her Approach To The Most Debated Scene From 'The Crown'
By Grace Wehniainen
Get Even More From Bustle — Sign Up For The Newsletter