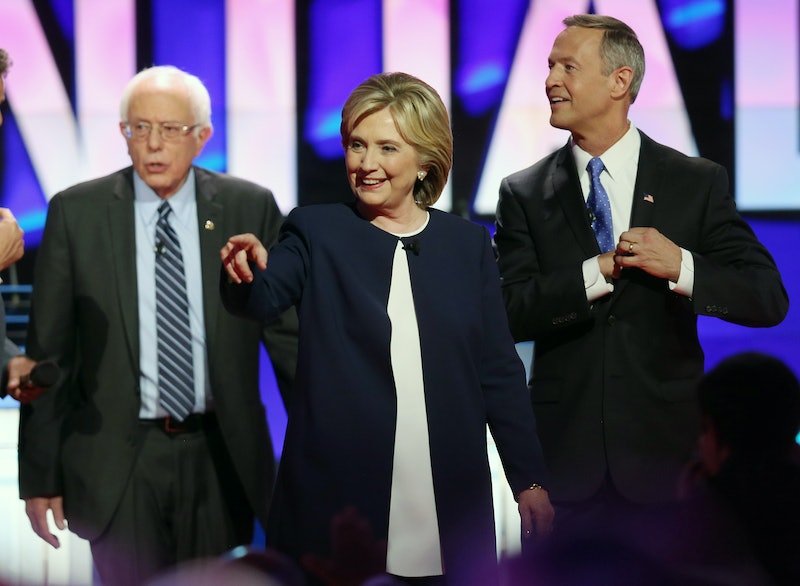 Now that the first democratic debate has occurred, citizens across the country all have one question burning in their hearts and minds: Who is going to impersonate Jim Webb on Saturday Night Live? The Democratic candidates for president haven't gotten as much media coverage as the menagerie of characters present in the Republican race. But, after that debate and now that the American people know it's not just Hillary Clinton running as a Democrat, who on SNL will impersonate the Democratic candidates?

Kate McKinnon's Hillary Clinton impression has already appeared alongside Hillary Clinton herself in the premiere episodes — similar to Hillary Clinton's appearance alongside Amy Poehler's Clinton back in 2008 — but there are still five other candidates that have been featured in major polls, four of whom participated alongside Clinton in the first Democratic debate. Some of SNL's funniest political cold opens have come from politician's quirks and gaffs during the debates, and while Donald Trump, Ben Carson, and the other Republican candidates have provided enough fodder for the writers of Saturday Night Live to write exclusively about them, it's unlikely they would go long without drawing attention to Sanders, O'Malley, and everything odd about Jim Webb. Here are my picks for the cast members best suited to take on the remaining Democratic candidates.

Martin O'Malley, the former mayor-turned-governor of Baltimore, who supposedly inspired the character of Tommy Carcetti from The Wire , made a name for himself during the debate as a reasonable, and viable candidate who just hasn't been able to get media coverage. His upfront and reserved energy makes him appear to be a very standard politician. Who would be up to the challenge from the SNL cast?

Taran Killam's frame and face are the closest match to O'Malley in the cast, and if Killam can handle portraying the human cartoon character that is Donald Trump, than O'Malley should be a walk in the park.

Lincoln Chaffee's biggest flub during the debate came when he attempted to find excuses for having voted for the Glass-Steagall Act, and repeatedly pointed out that he had "just arrived" in office. This kind of debate gaff is the kind of thing SNL sketches are born from, such as Rick Perry's "three agencies" gaff during a 2012 republican debate. Who would be the best choice to portray Chaffee?

Kyle Mooney has a great talent for adapting odd voices and mannerisms, and can stumble his way through a sentence better than just about anyone in the cast. He's an easy choice for the Rhode Island Governor.

Jim Webb was not happy with how the debate went. He called out Anderson Cooper for the structure of the debate, and seemed to spend a lot of time saying nothing in particular and had a fairly menacing answer to the question about which enemy they were proudest of having made. Webb was an odd duck out for the entirety of the debate, and deserves a cast member with a penchant for playing odd ducks.

Beck Bennett's history of odd characters, deep voice, and ability to be just a smidge hostile make him a perfect fit for Virginia Senator.

Bernie Sanders a wide and passionate following, a fun catchphrase, and some revolutionary ideas for the White House. He also has hair like Larry David and the anger of someone who received a well-done steak after ordering medium rare. Which current cast member would be able to tackle Sander's folksy appeal and deep-seeded outrage at the political system?

Donald Trump is hosting SNL for an episode later this season, and who better to impersonate the far-left democratic candidate for president than the far-right republican candidate for president? The show would likely have to find a permanent cast member to take over the role — Bobby Moynihan would probably do a good job — but this seems like a great opportunity for the show to make some delicious political metacommentary.

This week's SNL will likely have at least one sketch revolving around something related to the debate since their debate sketches are like The Avengers of SNL political sketches — It's all your favorite characters coming together! While SNL may not listen to my casting picks, there's enough material that no matter who they pick, it's going to be a hilarious presidential campaign on the comedy show.