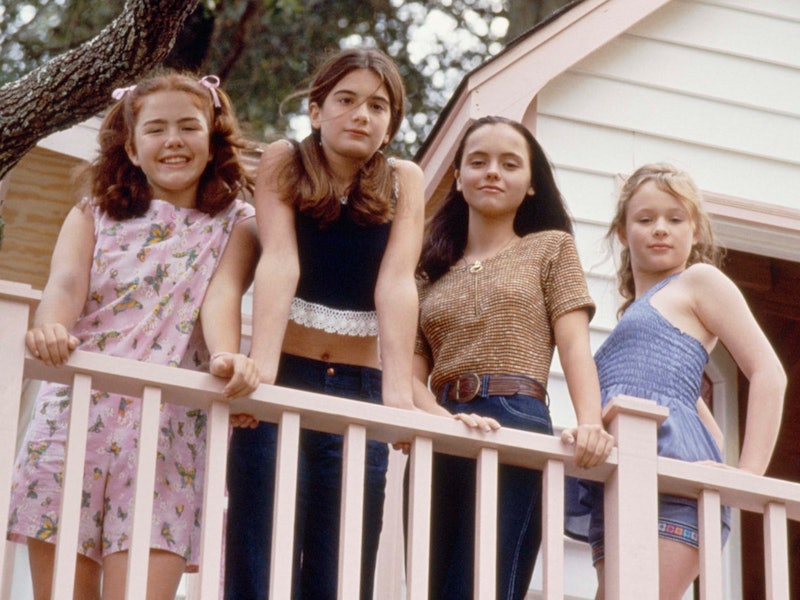 If you've seen even one episode of Pretty Little Liars, you have to admit that showrunner I. Marlene King is a genius. (Well, an evil genius since she always leaves us hanging!) You may know everything about the addictive ABC Family series, but here's a fact that blew my mind: King created another beloved cult classic, Now & Then . Yup, that coming-of-age movie about four friends that you probably watched at every middle-school sleepover was made by the same person as PLL. It's almost as shocking as finding out the identity of A, huh? Today officially marks 20 years since Now & Then premiered, so let's take a moment to celebrate the memorable movie.

Finding out that King is responsible for both obviously made me want to look back and see what they have in common. And guess what? The similarities between PLL and Now & Then will make your head explode — in the best way possible. On Instagram, Troian Bellisario (aka Spencer Hastings) dubbed Now & Then the "O.G. Pretty Little Liars " and she couldn't be more right. While Mar usually pulls one over on us, this time I'm onto her! There are definitely some recurring themes and I took the time to find them.

As a way to celebrate the movie's 20th anniversary (and keep ourselves busy as we anxiously await the return of PLL ), here are 20 ways Now & Then is the original Pretty Little Liars.

Both Samantha and Spencer are the brainiacs of the group. They're also consumed with trying to solve a mystery. Samantha needs to know what happened to Dear Johnny, while Spencer is always on the A trail.

These two are the biggest tomboys and athletes of the group. They both also have surprisingly sensitive sides, but know how to stand up for themselves. (Remember when Emily punched Sara, and Roberta punches that kid during the baseball game?)

They like to snack and don't always say the smartest things. Plus, Chrissy is the one who's about to give birth in Now & Then. There have been rumors that Hanna is pregnant in the PLL time jump. Coincidence? I think not.

4. Teeny Is Such An Aria

Although Teeny has some Hanna-esque qualities, I think she's more of an Aria. Teeny cares the most about her appearance, meanwhile Aria is the most stylish Liar. Plus, Teeny is always reading magazines and Aria is a writer herself.

Dun, dun, dun! Both feature a major time jump. That's what half the plot of Now & Then revolves around, while the new mid-season premiere of PLL kicks off five years in the future.

6. The Color Red Is Significant

In PLL, Red Coat is straight-up evil. Meanwhile, in N&T, the girls play Red Rover as a way to bond. While one of these is a sinister example and the other is good fun, it's still a recurring theme of red.

7. They Get Saved By An Unlikely Source

Remember when Samantha falls down the storm drain and Crazy Pete saves the day? This kind of is reminiscent of how in Rosewood the people who *seem* evil (Toby in season 1) are actually the nice guys.

8. Their Moms Keep Vital Info From Them

Chrissy's overprotective mom lies to her when she asks about sex. Meanwhile, the moms in PLL have some secrets of their own. Especially Veronica Hastings, who sometimes keeps information from Spencer in an attempt to protect her. These moms have their kids best interests at heart, but it doesn't always come across the best way.

9. There's Someone They're Avoiding

OK, in Now & Then, it's a way more playful rivalry with the Wormer Brothers. A friendly feud, if you will. But how A treats the Liars? That's on a whole other level. Regardless, there's always something or someone they're up against.

10. Bikes Are A Common Mode Of Transportation

It's not as much of a mode of transportation in Rosewood, but there are definitely characters who hop on bikes to get around. Looking at you, Ezra!

11. They Sneak Around In Cemeteries

In Now & Then, the girls want to perform a seance. But in PLL, it's often to try and dig themselves out of trouble. Regardless, this is a common setting in both.

Whether a treehouse they all buy or the barn in Spencer's backyard, there's a common meeting space for both groups that's just theirs.

13. Murders Are A Plot Twist

This is a regular occurrence on Pretty Little Liars, but in Now & Then, Roberta discovers her mom was murdered, contradicting what she always thought was true. (Reminiscent of Toby's discovery about his own mom, huh?)

14. Everyone Is Unexpectedly Connected

That Crazy Pete guy? Oh, he's the dad of Dear Johnny, the boy who was murdered along with Roberta's mom. Meanwhile on PLL, there are so many unexpected connections that shock us on a regular basis. Did anyone actually expect CeCe to be A?

15. Cute Couple Moments Will Give You All The Feels

If this moment did give you the same mushy feeling as a Haleb scene, then you must by lying. Oh, young love!

In both, there's an elderly woman who's slightly psychic and slightly creepy. In Now & Then, it's Wiladene. For PLL, it's Mrs. Grunwald from Ravenswood. King pointed out the similarity herself on Twitter.

Guess what? There's even a cast member in common. A very young Rumer Willis plays Samantha's younger sister Angela in Now & Then. She also appears in PLL as Emily's Habitat for Humanity leader Zoe.

The Now & Then girls hang at the diner, while the Pretty Little Liars loved the Apple Rose Grill.

19. Running Through The Woods Is A Regular Occurrence

Whether stealing the Wormer Brothers' clothes or jumping into the lake, the girls hang out in the woods in Now & Then. As for PLL, the amount of times the Liars go off in the woods is impossible to count.

No matter what life throws their way, all these years later, they have plenty in common. In both the movie and TV show, their friendships stand the test of time.

So there you have it! I. Marlene King really is a genius and Now & Then truly is the O.G. PLL. Now excuse me while I go binge-watch both!