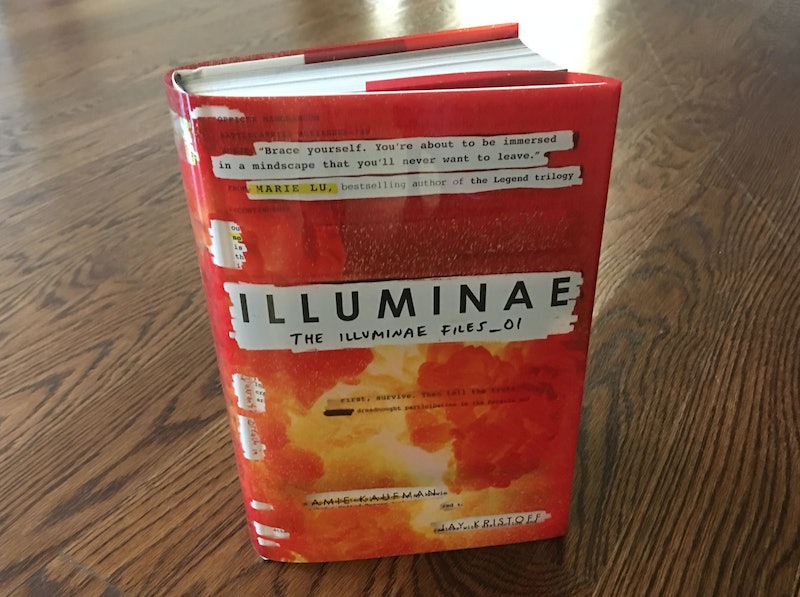 So far this year, young adult authors have taken their novels to crazy new levels. Trends in 2015 have shown that many YA writers are leaping beyond the traditional bounds of first- or third-person narrative to tell a story in a new, unique way—whether it's with illustrations, documents, transcripts, or emails, or through innovative narrators themselves. And there's no better example of this wildly different way of storytelling than Amie Kaufman and Jay Kristoff's Illuminae , a sprawling space epic told entirely via a series of classified documents.

When Illuminae begins, a small planet on the far reaches of the solar system is invaded, and just-this-second newly exes Ezra and Kady are split apart onto two different spaceships in a fleet to escape. But we don't hear this story directly from Ezra or Kady. The book is arranged as a dossier of hacked documents, filed together and given to an unknown person. Readers tear through schematics, censored emails, military files, medical reports, interviews, video transcripts, and so much more to gain the details on the story of what happened to the planet and what's going on with the fleet. Trust me, you've never read anything like it. And yes, you do get to feel like a top secret, space operative when you read it.

Though Illuminae is the epitome of these clever storytelling ideas in YA this year, these seven books put their own unique spin on a traditional narrative that will blow your reading minds.

Everything, Everything by Nicola Yoon

Madeline Whittier suffers from "bubble baby" syndrome, so allergic to the outside world that she has lived her whole life stick inside with just her doctor mother and nurse Carla. She is comfortable with this fate until a new boy moves in next door and intrigues Madeline enough to dream outside of her own four walls. Nicola Yoon amps up this vibrant tale even more by telling the story via short vignettes, diary entries, online chat conversations, medical records, and drawings. Madeline's unique story is brought to life by all of these documents and supplemental materials in a way that just prose could not do, though Yoon never makes them a distraction.

Peggy Kern's Little Peach centers on the horrific world of human trafficking, told from the perspective of Michelle, a teenager who leaves her drug addicted mother and finds herself the possession of a pimp who calls her "Little Peach." Parts of the story is told in a first person — which isn't that unusual but it is extremely effective. But Kern takes the story to another level by introducing chapters addressed to "you," a case worker in the hospital, in a way that seems to speak directly to readers themselves.

The unreliable narrator motif is fairly common, but Neal Shusterman takes it to a powerful, heart-wrenching new place by having his mentally ill narrator experience schizophrenic episodes. Caden Bosch hauntingly brings readers through his visions and paranoia. And the prose is supplemented by illustrations drawn by Neal's son Brendan, who himself suffers from schizophrenia, during his episodes. It's such a unique, raw, inside look into mental illness told with incredible love.

Shopaholic 's Sophie Kinsella tells us the story of 14-year-old Audrey who lives with a severe anxiety disorder, and she tells it in an innovative way. Part of Audrey's therapy treatment is to make documentary movies of her life and the people closest to her, and so readers get to "see" the films in a screenplay-style format as they advance the plot of Audrey's eccentric family and her burgeoning crush on her brother's video gamer pal Linus.

Hold Me Closer by David Levithan

Taking the screenplay idea even further is David Levithan—or should I say Tiny Cooper. In Levithan's novel Will Grayson, Will Grayson with John Green, Tiny Cooper is a secondary character who's working on a musical about his life. Hold Me Closer is that musical, and yes, it's written entirely as a script with stage directions, director notes, and even the music.

The Truth Commission by Susan Juby

The novel The Truth Commission actually exists as the narrative nonfiction project character Normandy Pale is working on for her art school. And so while yes, it does have the traditional narrative of Normandy emerging from the shadows of her graphic novelist older sister and combating gossip in her high school. But the pages of Juby's novel are also populated by illustrations, footnotes, and quick letters to Normandy's teacher. As if the story weren't already enough to draw you in, these additions fully envelop you in Normandy's mind and world.

The Rest of Us Just Live Here by Patrick Ness

In essence, Patrick Ness tells two completely different types of stories that occur parallel to each other in The Rest of Us Just Live Here. That first story is one of Chosen Ones fighting the end of the universe, falling insanely in love, fighting against monsters with blue gleaming eyes, and dying. The second story, the main story, plays out in the background. It's the story of the "ordinary" high schoolers, the ones who aren't selected to save the world, and who would just like to pass their final exams and take a crush to prom. Ness opens each chapter with the Chosen Ones, and then—in hilarious transitions—moves to the everyday kids and their everyday stories. He's able to write a book about prototypical YA heroes and heroines without actually writing a book about them. It's hard to find another book that tells a story in quite the same way without making it feel somehow false, like a cheap trick.