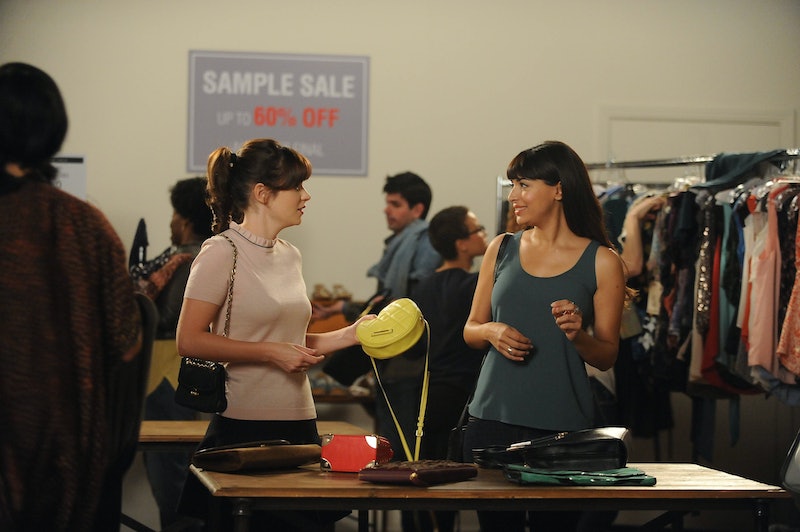 As entertaining as it is to watch Lindsay Lohan and Rachel McAdams battle it out in Mean Girls, it's a bummer that most women probably feel a depressing twinge of familiarity during the film — because it really is a close depiction of where the passive aggressiveness of female friendships sometimes take us. (With a few hilariously over-the-top exaggerations tossed in the mix, of course.)

Anyone who has ever had a best friend knows that your weird intimacy comes with a price. You love one another enough to pee with the door open and evaluate each other's potential BO, but with all that closeness comes moments of insecurity and envy — and what better way to express that mess than with passive aggressiveness?

It's no wonder we get catty with our best of friends sometimes. We adore them so much that, even when we're upset or jealous, we don't want to ruin the bond we have with each other by being directly aggressive. Read on for six passive aggressive things best friends say to each other, and what to say instead.

Nothing's wrong with being honest about what you're both wearing; but it's all about your delivery. Saying any variation of the above question is a surefire way to bring in resentment — and maybe a few tears. Besides, if your BFF can't make you feel like you're beautiful, who in this cruel world can?

What To Do Instead: If you want to tell your best friend that something doesn't look great on them, hand them another outfit and tell them they would look even hotter in it than they look in their current one. Or, just kindly inform them that they're gorgeous no matter what, but this particular dress isn't the most flattering thing they've got hanging up in their closet. Contrary to popular belief, it is possible to keep things simultaneously honest and positive.

There's more than enough snack shaming out there in marketing campaigns; we don't need to add to the noise by constantly chastening each other for picking up a Snickers bar. Everyone's got their own diet needs and habits, and we should be honoring those differences instead of placing a damaging label on them.

The Association of Anorexia Nervosa and Associated Disorders says that 91 percent of females interviewed on college campuses have resorted to unhealthy dieting in order to control their weight. If we keep tossing around phrases like the above one, we'll only make that outrageously high statistic rise even further.

What To Do Instead: You might really care about your bestie's overall health, which includes a well-rounded diet, and that's very cool of you. What's not OK, though, is putting them down when they're reaching for something to munch on.

Instead of attaching a negative connotation to the act of eating, lead by example. Start cooking some healthy meals for them; offer them some trail mix or chocolate covered almonds when you're out shopping. Think of ways you can improve your well-being together, and steer you conversations away from the concept of dieting.

3. "Sounds Like You Guys Had A Great Time Together..."

Ah, the green monster. We'll never be able to live without it, but we can certainly learn to tame it. When we hear about the life-changing, awesome time our friend had with someone who isn't us, we tend to take the easy way out and let envy run its course. It's far easier than admitting to others — and more importantly, to ourselves — that we feel totally left out.

Handling jealousy this way leads down an ugly road, though, as you probably already know. It's also a way to avoid admitting that there may be some areas of your friendship that need a little bit of work. Have you ever thought about why your BFF is spending so much time with someone else?

What To Do Instead: Tell your bestie that you'd love to join her and her new buddy the next time they hang out, or use your jealousy as a cue that you need to check in about the state of your friendship.

Wisecracks have their time and place, but with even the closest of friends, there comes a time when we cross the line. We're human and we say stupid stuff every now and again. No biggie. The recovery from these slip-ups is what matters much more. When one bestie says this to another, they're basically telling them to get over it, and that their feelings don't mean much. It's a classic example of passive aggressive behavior, because it goes right back to avoiding conflict rather than boldly facing it.

What To Do Instead: First of all, own up to the fact that you've said something not-so-nice. It doesn't make you a bad friend, so don't beat yourself up over it. Apologize to your friend and be open to hearing their side of the whole thing — there might be some stuff going on that they haven't told you about yet, and this could be the opportune moment for them to share it with you.

It's a crappy feeling, seeing your friend's eyes glued to their phone when you're trying to tell them something important. Being passive aggressive will only make the situation worse, though. Saying this also comes off as self-righteous, because let's face it, most of us have issues with social media addiction.

What To Do Instead: Be adults about it — find a way to express the fact that you don't feel heard. After you've cooled off, sit down with your BFF and ask them to give you their undivided attention when you're telling them about the massive fight you had with your mom. They care about you, so chances are they'll respond with an apology, a hug, and a self-deprecating joke about how their obsession with Facebook isn't their most attractive characteristic.

This dig usually rears its ugly head when one of you is overwhelmed with juggling everything — work, quality time with the SO, and moving into a new apartment. We might use this phrase when we're tired of hearing our friend whine about their long to-do list, especially if we're not feeling so confident about what's going on in our own lives (hello again, jealousy). However, pulling out this expression diminishes your friend's feelings, and it's just an immature way to dodge the truth that you're a bit envious of all the new, exciting endeavors they're experiencing.

What To Do Instead: Offer to give them a hand with everything they've got on their plate. Without a doubt, there will be times in your friendship when one of you seems to have everything going right while the other one doesn't. The two of you will come out on the other side happier than ever, though, if you find a way to handle this stage with sincerity.

More like this
25 Inspiring Quotes From Black Women To Celebrate Black History Month
By Kyli Rodriguez-Cayro and JR Thorpe
24 History-Making Black Women You Probably Didn't Learn About In School
By Ayana Lage and JR Thorpe
21 Galentine’s Day Memes To Celebrate Your Best Friends
By Meghan Bassett and Mia Mercado
5 Signs You Have A Toxic Relationship With Yourself
By Lexi Inks
Get Even More From Bustle — Sign Up For The Newsletter
From hair trends to relationship advice, our daily newsletter has everything you need to sound like a person who’s on TikTok, even if you aren’t.