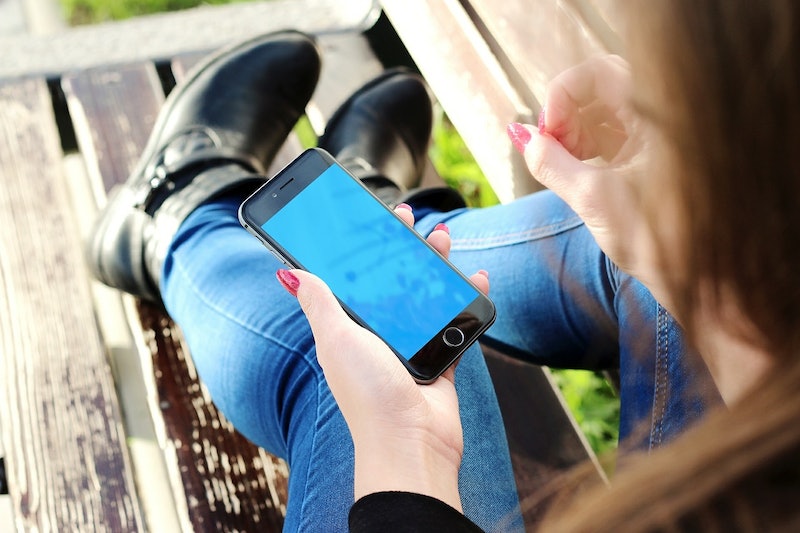 If you're single and in your twenties or thirties, there's a high probability that you use dating apps like Tinder to find potential partners, or even just to kill time while you wait for your dentist appointment. The swiping phenomenon is real, and is a serious form of entertainment: After all, what's more fun for Millennials than silently judging others using an app?

TBH, swipe-based apps, though shallow in nature — who can decide if someone is worthwhile based on six pictures? — are actually really fun to use. My best friend and I sometimes spend hours "hanging out," but we're really just browsing Tinder together and showing each other particularly cute or particularly not-cute guys. It might sound dumb, but it's a bonding experience — far more than just a tool to find dates, these apps are a legitimate hobby for me (and others, I'm sure). While some might find that sad, I embrace it. Dating apps clearly aren't going anywhere, and I enjoy the opportunity to talk to and meet so many new people without ever leaving my bed.

That being said, I like to think I have a pretty solid grasp on the "best" way to use dating apps: Giving people a fair chance, but not spending too much time mulling someone over. Whether you're loyal to Tinder, Bumble, Hinge, or some other swipe-centric dating app, you could benefit from avoiding these six swiping mistakes.

If you've trained your thumbs to move at lightning speed while you're swiping through matches, you're probably going to wind up regretting it sooner or later. Unless you pay for Tinder Plus and have the Rewind feature, there's no going back on some apps once your thumb decides it doesn't like someone, even if your brain catches up a split second too late and you realize they actually were cute. Slow down a bit and take the time to look through all of someone's photos instead of making a split-second judgment based on the first picture alone.

Pro tip: You can undo your swipe on Bumble or Hinge by shaking your phone.

On the other hand, there's no need to scrutinize someone's photos for too long. Sure, you might want to make an informed decision, but at the end of the day, your gut is probably right: If you aren't attracted to someone after looking at their pictures for a minute or so, chances are you may not change your mind IRL. After all, the "lust at first sight" thing is what dating apps like Tinder are all about, right?

3. Not Reading Bios Before Swiping

One of my favorite parts of any dating app are the often-ridiculous bios. Nine times out of 10, you don't really get any information based on a couple sentences, but they're still worth reading, if only to LOL at the stupid stuff people say. If you're lucky, though, you'll come across someone whose bio actually reveals something cool, and it will give you a good jumping off point if you decide to start a conversation later. To that end, here's a tip for your own bio: Keep it short and sweet, with an interesting fact about yourself that will intrigue people and encourage them to say hi. (For example, mine is: "One time Seth Meyers mentioned me in his monologue on Late Night." True story!)

I feel like this is a common strategy for guys: Swipe right on everyone to increase the potential number of matches, regardless of whether or not you're actually attracted to the person. While that's nice in theory, it creates a hell of a lot of work for you later, when you have to actually look through all your matches and decide which ones you really like, and unmatch the rest. Not a very smart strategy, IMHO.

Tinder's new Super Like feature may not solve all your online dating problems, but it's definitely a cool feature to experiment with. You only get a few per day, so when you Super Like someone (by swiping up) it shows that you think they're extra cute. It may not be a guaranteed way to get them to like you back, but it can't hurt, either, so give it a shot. Unfortunately, other dating apps don't have this particular feature, but they do have other ways to get someone's attention.

6. Swiping So Much You Forget To Chat

We've all been there: Your eyes and thumbs have been glued to Tinder or Bumble for hours, and you can't seem to get out of the black hole and actually talk to anyone you just matched with. While it's fun to look at people's profiles, don't forget that the whole point of dating apps is to chat with your matches so you can meet IRL and (hopefully) hit it off. A good rule of thumb for those days when you spend hours swiping? Give your thumb a break after a half-hour, and strike up a convo with some of your matches instead.