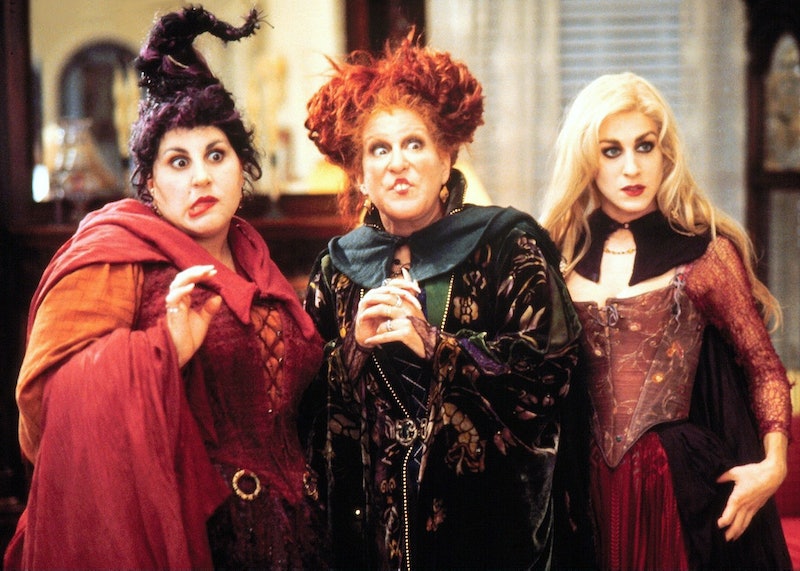 There are two types of movies people like to watch around Halloween. There are legitimately scary horror movies that seem that much scarier when the calendar turns to October, and then there are the family-friendly movies about Halloween that a lot of us grew up watching. While I'm known to enjoy a good scary flick now and then, there's nothing I like more than revisiting my childhood with a good old fashioned Halloween-themed movie or special. And while there are plenty of kids movies out there dealing with creepy subject matter (The Monster Squad, Coraline, and The Addams Family, to name a few), I'm specifically talking about movies that take place on Halloween or else feature the holiday in some major way. So what are the best family-friendly Halloween movies out there?

Of the ones I've listed below, there is a healthy mix of both live-action and animated (and stop-motion animation, of course) fare for all your Halloween viewing needs, and most are available to stream immediately from services like Amazon Instant Video or iTunes. Some are even able to be viewed for free if you subscribe to services like Netflix and Hulu (and who among us doesn't, right?). So bust out your popcorn balls and an unhealthy amount of candy because here are nine of the best family-friendly Halloween movies and where to watch them.

When Disney puts the effort into a movie, nobody does family entertainment better. That Disney magic is all over this 1993 classic, which scared the pants off of me when I was a kid. As if you didn't know, it's about three Colonial era witches who return from the grave on Halloween in modern times (well, the '90s). It's fun, funny, and scary, and no Halloween season is complete without viewing it.

To be honest, I've never seen this Disney Channel original since I grew up without cable deep in the woods of Maine (talk about scary). But people love this movie, so I'm not going to leave it off the list and then sift through a bunch of angry tweets later. From what I understand, it's about a girl who discovers she's a witch and then travels to a magical place called Halloweentown. I'd say it's about time I finally got around to watching this thing.

Where to watch: Purchase from Amazon or iTunes for $5.99.

Darker than most Disney animated features, which is why they released it under their Touchstone Pictures brand, Tim Burton's stop-motion classic about Pumpkin King Jack Skellington discovering Christmas was for years stuck between being a Halloween movie and a Christmas movie. After all, Christmas is in the title, but most of the film takes place in Halloween Town (not to be confused with Halloweentown), so which is it? Well, during an appearance at this year's Telluride Horror Show, the film's director Henry Selick said that it's a Halloween movie. So there. Get watching.

Where to watch: Netflix, free with subscription.

Another Touchstone Pictures release, Ernest movies were an admittedly weird phenomenon of the late '80s and early '90s, and they generally don't hold up so well for adult viewings. But this Halloween entry, about an evil troll (a troll!) who returns to Earth on Halloween, is the exception. The troll is genuinely scary (I maintain this is the scariest movie I've ever seen), and the scene where he shows up in the bed of one of the characters is pure nightmare fuel.

The first non-Disney associated film on the list, this 1993 animated cult classic was a Hanna-Barbera production that became a staple on Cartoon Network during the Halloween season. The movie is educational, as its characters learn about the (very interesting) roots of the holiday, and it also has some serious pedigree behind it: its Emmy-winning script was penned by horror legend Ray Bradbury, based off his own novel.

The Legend Of Sleepy Hollow

And we're back to Disney! Originally paired with The Wind in the Willows as a full-length theatrical feature in 1949 called The Adventures of Ichabod and Mr. Toad, this animated version of Washington Irving's tale about the Headless Horseman is still the best treatment Irving's story has ever received, in my opinion.

Where to watch: Rent (as The Adventures of Ichabod and Mr. Toad) from Amazon or iTunes, starting at $2.99.

It's the Great Pumpkin, Charlie Brown

OK, so it's not a full movie at only a half hour long, but this 1966 TV special is considered by most sane people to be the quintessential program to watch on Halloween. As if you didn't know, it's about Linus's belief in the Great Pumpkin, a Santa Claus-like figure who graces the sincerest pumpkin patches on Halloween with his presence (and presents). Halloween movies don't get more classic than this.

Where to watch: Purchase on Amazon or iTunes, starting at $6.99.

I may be in the minority, but I consider Garfield's Halloween Adventure to be on equal footing with Charlie Brown. It's funny and also a little scary, as Garfield and Odie run into some ghost pirates on Halloween night. It's really creative and has some great music, and it's a shame that it's no longer aired on network TV during October alongside its comic strip brethren like it was in its heyday.

Where to watch: Hulu, free with subscription.

In case you haven't figured it out yet, no one does Halloween quite like Disney. The House of Mouse has released several Halloween-themed specials over the years, consisting of spooky movie clips, Halloween cartoons, and songs. Halloween Treat, released in 1982, is the best of these specials, but it's almost impossible to find. Thankfully, some intrepid soul has put the entire 90-minute special on YouTube in seven parts, which you can view here.

You now have plenty of options for your Halloween viewing pleasure, and you won't even have to kick your kids out of the room to enjoy them. Or, if you don't have children of your own, these movies should do the trick of making you feel like a kid again just in time for Halloween. What a treat!

More like this
12 Documentaries & Films About Cults From Netflix UK To Hook You From Start To Finish
By Kay Leong
Everything To Know About 'My Big Fat Greek Wedding 3'
By Grace Wehniainen
Alicia Silverstone Has Recreated An Iconic 'Clueless' Scene
By Frances Stewart
Emma Thompson, Lashana Lynch, & Stephen Graham Lead Netflix’s 'Matilda'
By Sophie McEvoy
Get Even More From Bustle — Sign Up For The Newsletter