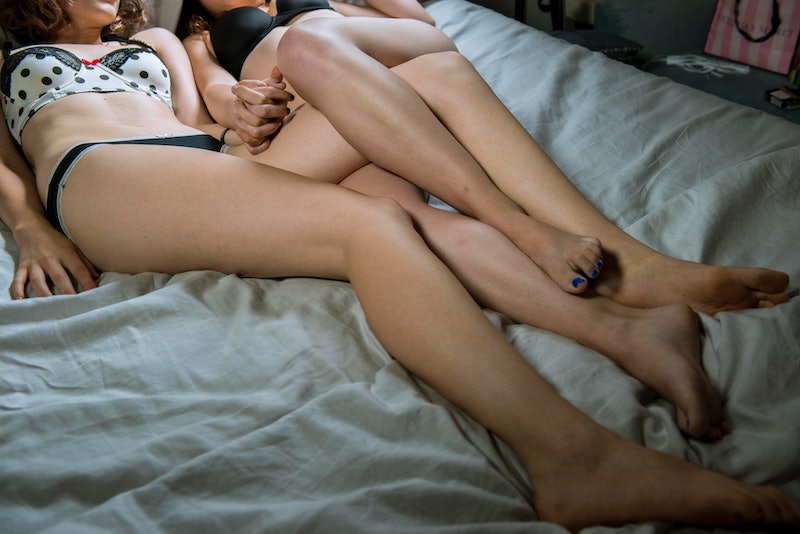 A survey of 1,000 American adults by Adam And Eve, a sex toy company, found that 41 percent of us are taking part in casual hookup relationships. Firstly, I know this may seem obvious to some people but I think it's important to touch base on what "hooking up" means. Sex jargon varies depending on where you are in the world (over here in England, 'pulling' means making out... it's super weird), and even between friendship groups. I used to say 'hooking up' to mean third base— basically, foreplay. But here we're talking about hooking up as no-strings-attatched sex. And it turns out, according to the survey, 41 percent of us are doing it.

Adam And Eve's sexpert Dr Kat Van Kirk says: "Many young adults are substituting long-term relationships for hookups… believing it is expected of them. Unfortunately, research has shown that neither partner walks away particularly satisfied."

In my experience, and from watching my friends, it completely depends on personality types. Some people can have casual sex and enjoy it, some don't. Some people love one-night stands or, if you're like me, you like casual sex but prefer it to be with people you know and trust. I don't lament hookup culture in the least, and I have many friends who have happily had lots of one-night stands. But it's all about doing what's right for you— what meets your needs but keeps you feeling comfortable— and sticking to that. And be safe, obviously. The fact that 41 percent of us are doing it and 59 percent of us aren't shows that there are huge discrepancies in what we enjoy.

So, if you are going for it — how do these hookups go down?

The old standby holds true. It looks like the bar is still where people go for no strings attached sex. Which is amazing to me, because I've never heard a pickup line that didn't make my vagina sad.

Surely this is the worst place for casual sex, right? Someone who you're going to run into all the time? That begin said, I dated a guy from the last office I worked at so don't listen to me.

I'm assuming this includes apps, although I'm surprised it's not higher because I assumed Tinder, Grinder, et al would be the number one way to hook up now. But I guess not everyone is talking about them— old folks need loving too.

There must have been quite a large percentage of college students responding in order to get school hookups at ten percent and for some reason it makes me weirdly happy that people are looking into sex toy sights already. Lots years of underwhelming sex spared.