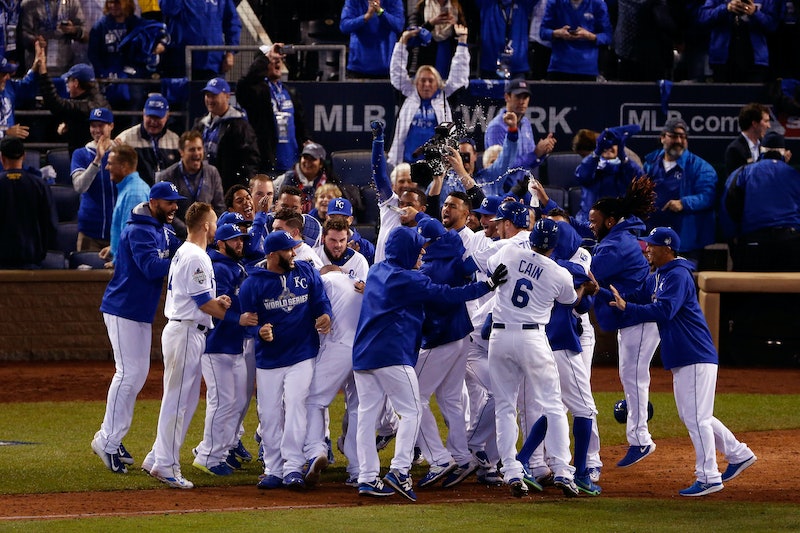 I'll be the first to admit it: I don't know sh*t about baseball. To be fair, I grew up in Kentucky, where there isn't even an MLB team to root for. But I do know about sex, so in honor of the 2015 World Series, here's a breakdown of what each team's fans are doing when they aren't in the bleachers cheering their favorite athletes on.

First thing's first: Who's more likely to 'score' at home? Data from the SKYN Condoms Millennial Sex Survey tells us that, by and large, New York fans have Royals fans beat when it comes to how often they're having sex. Sixty-three percent of Mets fans reported that they have sex at least several times per week, while only 48 percent of Royals fans claim to be getting laid more than once a week. But hey, if the majority of both team's fans are regularly having sex, that's something to be proud of in my book. Good job, fans.

If you're a diehard Mets or Royals fan, read on to find out seven more surprising facts about the sex lives of your fellow baseball fanatics, just in time for them to face off in this year's World Series. Obviously, baseball and sex aren't really correlated, so you can rest easy knowing that the results of this survey *probably* won't affect your team's odds.

Survey says that Kansas City fans are winners in the safe sex category: 60 percent of Royals fans reported 'batting with a helmet on' (aka using condoms, obvi) always or most of the time, while only 48 percent of Mets fans use condoms with the same frequency. PSA: Safe sex is super important.

Despite the fact that the population of NYC is huge compared to Kansas City, Royals fans have slightly more sex partners than Mets fans. Twenty percent of Kansas City fans reported having 15 or more partners, while only 12 percent of New Yorkers said they've slept with that many people. It's important to note that your number doesn't matter, though.

4. Mets Fans Are More Likely To Have A Much Younger Partner

However, their number one fantasies are pretty different: Royals fans' prefer to role play as 'strangers' while Mets fans opt for the ever-popular 'school girl' fantasy. Whatever tickles your fancy, go for it: Role playing is a great way to make sex hotter — and if your team loses the World Series, it might help to pretend to be someone else for a night.

6. Royals Fans Are More Likely To Sleep With A Relative's Partner

Yikes — this takes 'stealing bases' to a whole new level. According to the survey, Royals fans are four times as likely as Mets fans to report having sex with one of their relative's partners. I'll go ahead and attribute this phenomenon to the fact that NYC is about 17 times larger than Kansas City, so maybe they just have fewer romantic options?

The survey found that 39 percent of men in Kansas City self-reported their penis size as greater than 7.1 inches, while only 21 percent of New Yorkers admitted the same. But hey, maybe Mets fans are just more humble, because roughly 30 percent of people in both areas reported that their partner's penis was over seven inches. Maybe it's just me, but I'm going to assume the partner is a little less biased in this situation. Even though size isn't everything and certainly doesn't equate to better sex, congrats on your larger-than-average penises, everyone.

More like this
Help! My Partner Only Wants Sex Late At Night & Won’t Compromise
By Sophia Benoit
Ask A Sex Therapist: Is My Sex Fantasy Normal?
By Madison Malone Kircher
What Mercury Retrograde Spring 2022 Means For Your Sign's Sex Life
By Nina Kahn
Are Gemini & Scorpio Compatible In A Relationship?
By Kristine Fellizar
Get Even More From Bustle — Sign Up For The Newsletter