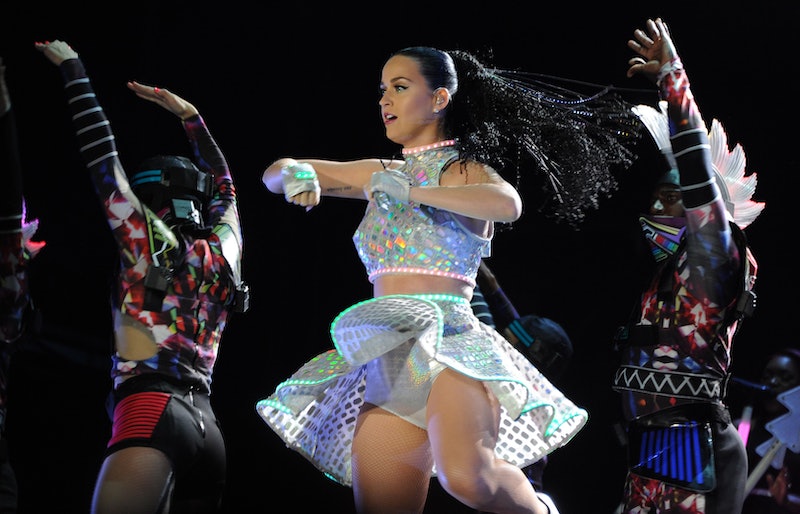 Thursday was a fantabulous day for Katy Perry. In case you haven't heard, Katy Perry was named the highest paid woman in music by Forbes. Perry graced the cover of Forbes back in July 2015 with an article titled "How Katy Perry Became America's Top Pop Export," which celebrated all the ways the icon had become an important player in the music business, not to mention the ultimate #GirlBoss. So, why are people so intent on criticizing Katy Perry instead of lauding her significant feats as a woman and a feminist? And, y'know, the creator of several of my most favorite perfumes of all time?

Often pitted against Taylor Swift, who came in second on Forbes' list, Perry has mostly kept quiet regarding any existing rivalry, focusing instead on growing her business — stratospherically

it seems. Aside from that one Mean Girls-inspired dig, of course. (Perry tweeted "Watch out for the Regina George in sheep's clothing ..." in September 2014, a tweet many attribute to being in reference to Swift.)

In her interview with Forbes, Katy Perry said, “I am proud of my position as a boss, as a person that runs my own company. I’m an entrepreneur… I don’t want to shy away from it. I actually want to kind of grab it by its balls.” Which, let's be honest, is totally badass.

Although it would've been easy to assume that Taylor Swift would top Forbes' list, hot on the heels of her 1989 tour and the sheer calibre of BFFs who paraded the stage with her, Perry's been developing her business in the background. One of Perry's biggest money-makers has been her 151 date Prismatic world tour, which drew to a close in October 2015, and was recently released on DVD and to download (in case, like me, you missed out on tickets). Considering the tour began in May 2014, Perry's commitment to her work is clear. She's been on the road for a year and half, and has achieved so much in that time. Forbes note that 126 of the Prismatic tour dates took place in their scoring period, and contributed to her totaling that immense earned figure of $135 million.

Aside from embarking on a cray cray world tour, Katy Perry has scored lucrative deals with leading brands like Coty, Claire’s and Covergirl. As a grown woman who owns several pieces from Perry's Claire's jewelry collection, I can attest that her brand is fierce and timeless — when will hotdog earrings ever not be in fashion? Each of these collaborations has kept Perry's brand fresh, and allowed her to gain that much-deserved entrepreneur status.

So, why is Katy Perry continually beaten down? Everyone is so desperate to assume a bitter rivalry exists between Katy Perry and Taylor Swift that it's often the only question asked of both women. Lyrics are analyzed and theories created. Even if they do seriously hate each other, it's misogynistic to make the most important and publicized detail about two of the most famous women in the world that they are fighting. Shouldn't the fact that they're both at the top of Forbes' list of highest-earning women in music be celebrated, rather than used as an excuse to reignite talk of "Bad Blood?"

Katy Perry may have only recently embraced feminism, but this particular accolade shows that Perry is a powerful business woman who's not scared to stand up on behalf of women everywhere. In an Instagram post sharing her Forbes ' cover, Perry said, "Before accepting the offer to be on the cover of Forbes, I was told that a lot of women have previously shied away from doing it... Ladies, there is a difference between being humble and working hard to see the fruits of your labor blossom, and your dreams realized. Hopefully this cover can be an inspiration to women out there that it's okay to be proud of hard earned success and that there is no shame in being a boss." What an awesome message!

Katy Perry's refusal to back down, or shy away from celebrating her successes, is not only refreshing, but so important for women everywhere. If you ever needed a push to ask for that raise or publicly celebrate your own achievements, here's your call to action. There's no reason a woman can't be a superstar slash business person slash boss slash entrepreneur slash President. Now is the time, people.

Maybe Perry and Swift hate each other. If they do, I'm actually alright with that. There's no law that says all women must be friends purely because they have vaginas, right? People fall out; it's a fact. But would so much be made of this particular alleged spat if the sexes were reversed? Why are we so eager to beat down the highest-earning women in music? It's time we celebrated their achievements instead.

So, please leave Katy Perry alone, unless you're applauding her fierce business acumen. I need her to keep mixing those perfume concoctions and creating jewelry in the shape of hamburgers, because I need things to look forward to in life. And, with new music on the way from Perry, we need to start being a bit more grateful for the good in our lives instead of trying to push focus onto the bad.