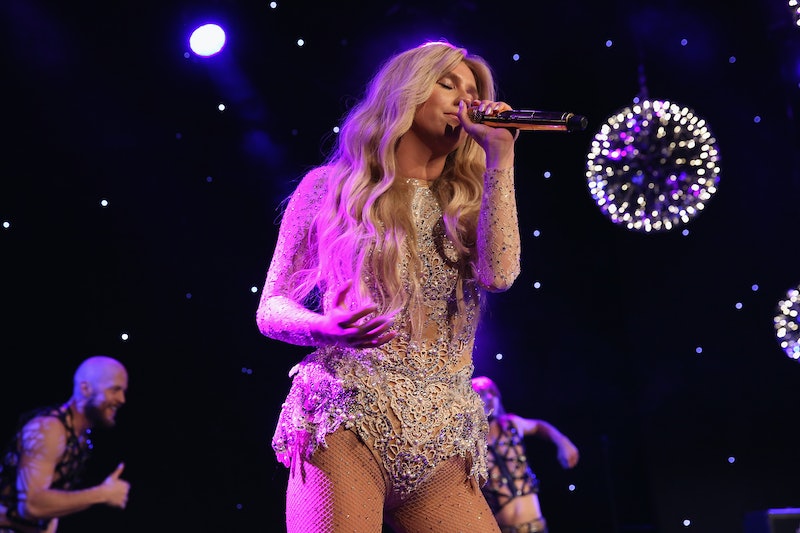 With so much happening in the world, it can be easy to forget the tragic reality that, ever since October 2014, Kesha has been suing Dr. Luke in a lengthy legal battle. The pop singer has accused her longtime producer of sexual assault and battery, sexual harassment, violence and emotional abuse. This case has been going on for over a year, with Dr. Luke countersuing Kesha, claiming that her accusations are merely a cover for the fact that she wants to get out of her contract with Sony. Meanwhile, Kesha alleges that Sony has “forced an abusive relationship” between the singer and producer, with Sony allegedly telling the singer that, if she records a new record, it must be with Dr. Luke's record label — which is an imprint of the company. Bustle has reached out to RCA Records and Dr. Luke's legal representatives for comment, but have yet to receive a reply.

This legal battle has forced Kesha to a career standstill. The first time we heard Kesha was on Flo Rida's single "Right Round" in early 2009, which was followed in August 2009 with Kesha's debut "Tik Tok." The song got to No. 1 in 11 countries. Since the start of her career, Kesha's been fearless with her music, in her interviews, and with her fans. Being stuck in litigation with her alleged abuser is not only damaging for Kesha's music career, but her entire future. What's even worse is that these legal struggles come with so many added implications the public and her fans might not be aware of.

Kesha's last album, Warrior , came out in 2012. By pop standards, that's a long time to not be releasing new material. Kesha has been making it clear that she's desperate to make new music on her own terms. Kesha's outspoken, creatively diverse, and unafraid to reference pop culture in the best way (Remember that James Van Der Beek video?). She's always been one of my favorite #GirlBosses, but her current legal battle means she's forbidden from creating or recording new music and taking back control of her own career. As if being involved in such a high-profile case wasn't bad enough, Kesha is being creatively stifled until the case has run its course.

While we can still admire Kesha's killer style, the music scene is a much duller place without her raucous tunes in it. Kesha's current legal case is undoubtedly complicated, but I hope there's a way forward for her pop career — and that she is able to start recording sooner rather than later. Kesha is too exciting an artist to be silent for this long, and it's clear from her appeals to the judge to get back in the studio that she longs to share her music with the world again. Hopefully, she eventually gets that chance, one way or another.