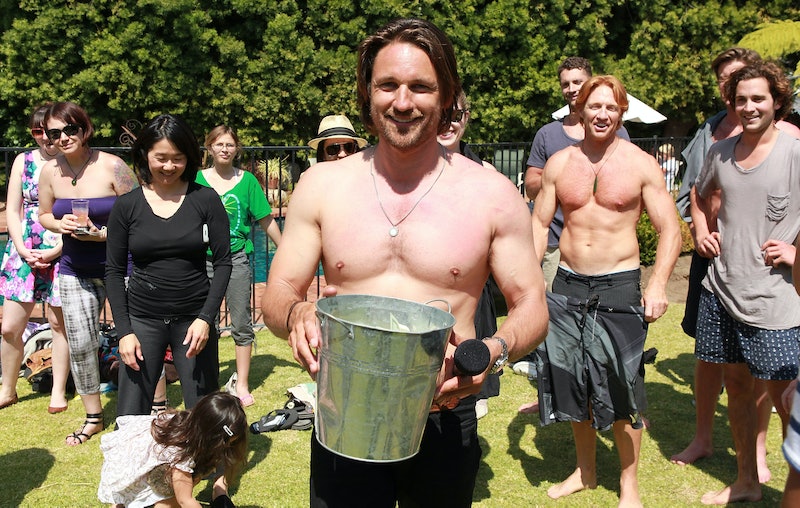 News that Martin Henderson would be joining the cast of Grey's Anatomy for Season 12 hit the Internet hard. After losing McDreamy, hearing that someone as, well, dreamy as Henderson would be arriving at Grey Sloan Memorial Hospital was welcomed. I've enjoyed the way in which Grey Anatomy has become a super-feminist show, featuring a cast of diverse, complicated, hilarious women; a true ensemble cast of amaze talent — but what is perhaps lacking since the devastating passing of, oh, EVERYONE, is a character who can take McDreamy's place. Although we're lucky to still have stalwart Justin Chambers, Jason George, Kevin McKidd and Jesse Williams on our screens, there is absolutely room for more talent on Grey's Anatomy. And Martin Henderson is exactly what Grey's needs right now, for several reasons.

To start with, his character has a past which connects him with other characters. As evidenced in Season 12 Episode 6, his first appearance on the show as Dr. Nathan Riggs, he comes to the hospital as a colleague of April Kepner's (Sarah Drew) — but he also knows Owen Hunt (Kevin McKidd). In a tense exchange, Hunt tells Riggs to leave, immediately. These two have history, and it'll be exciting to see how the tension between them is explored in coming episodes.

Rumors that Henderson may be Meredith Grey's new love interest seem to have given fans mixed feelings. In Entertainment Weekly, Meredith herself, Ellen Pompeo, said, "We’re going to start seeing Meredith begin exploring the question of 'Once you’ve had a perfect love and a perfect marriage, with the perfect guy, what do you do next?' A part of her is definitely going to wonder if the best parts of her love life are already behind her." It certainly doesn't sound like her character is about to rush into anything — and having seen Henderson's first episode, it actually seems more likely that his character, Nathan Riggs, might be more interested in April Kepner.

Despite knowing that Kepner and her husband and having marital issues, Riggs took her away from Jackson Avery whenever he could, and the pair seemed to have several in jokes. Talk of April and Jackson separating for good has been in the air for a long time, and it looks as though Riggs might cause a little trouble for the couple before he moves on to anyone else at Grey Sloan Memorial.

The fact that Henderson is playing the character is really an added bonus. Henderson has been working solidly for years, making movies and TV shows. His roles which stick with me the most are as Noah in The Ring (opposite Naomi Watts) and as Darcy in Bride and Prejudice. It's exciting to see him become part of a show that will allow him to showcase his range as an actor.

Whether Henderson's character is a McDreamy replacement or not, he's definitely adding a little drama to the show as it enters Season 12, and that can't be a bad thing.