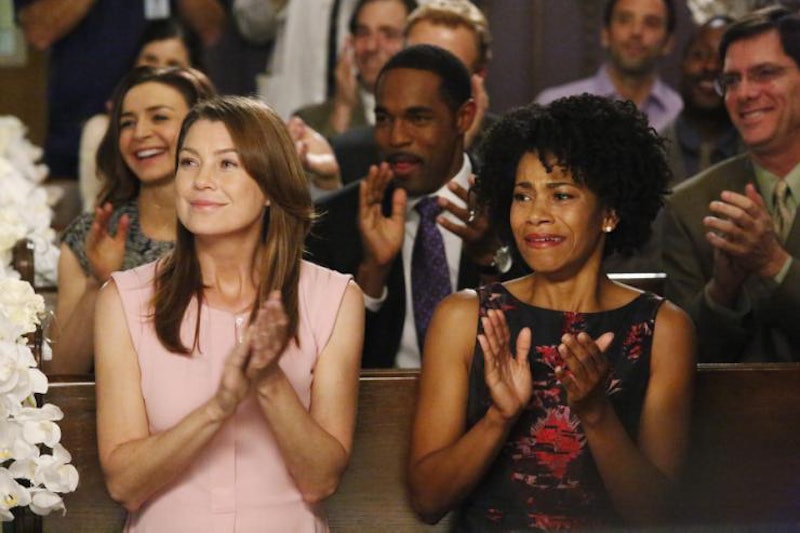 The creator of Grey's Anatomy, Shonda Rhimes, has been outspoken about the importance of 'normalizing' television. In interviews, Rhimes makes it clear that she's no longer interested in talking about diversity, instead wanting her TV shows to represent real life. And, it's becoming more apparent every time she adds to her stable of Shondaland shows that, for characters to be truly fearless, feminist and fierce, they also need to be vulnerable at times, and realistically flawed — after all, no one is perfect all the time, so why would television characters be any different?

Grey's Anatomy is a feminist show and always has been — not only because its lead, Meredith Grey, can overcome anything and remain totally kickass in the process (Grey is played beautifully by Ellen Pompeo), but also because the show is never afraid to comment on important social moments, such as the very real fight for equal pay. This continuing commentary makes Grey's Anatomy an important show, and one filled with characters we can all relate to who will always try to stand up for what's right.

Over the years, Grey's has featured some awesome female characters, like cardiac surgeon Cristina Yang (played by Sandra Oh), and McDreamy's ex Addison Montgomery (played by Kate Walsh). But, as we enter Season 12, all of the characters continue to be amaze — particularly when it comes to feminism. Here are some life lessons the characters (or my Grey's family, as I like to think of them) continue to teach me.

The Fight For Equal Pay Lies With You

In Season 12, Episode 3, an important discussion took place about wage equality on Grey's . Meredith was given a low salary offer, learning she'd be earning much less than her peers. She took the matter to the Chief, and got the raise she asked for. Chief Bailey defended this process, saying that a person needs to fight for what they deserve, not expect to get it handed to them. Inspiration for us all to stand up for ourselves at work and in daily life.

There's Life After Death Or Divorce

So many couples have broken up or ended on Grey's recently, it's hard to keep up. But, the loudest message seems to be that even if you don't want your relationship to be over, there's always a way forward. Meredith is currently embracing being a widow and what that means for her sex life, April has begrudgingly separated from Jackson, and Callie has started dating again post-divorce. Grey's teaches us that starting over is possible and necessary.

One thing I've always been envious of is the amount of sex characters on Grey's Anatomy have. Obviously, libidos are incredibly varied, but Grey's has taught me that sometimes you've just got to be brave and have sex if that's what you want to do. Maybe you're scared to put yourself out there or to start a new relationship, but you don't need to feel guilty about trying something new. Own it!

Whether it's Miranda Bailey becoming Chief of the hospital, or Meredith Grey getting the salary she deserved, the women of Grey's Anatomy aren't afraid to take charge and be unstoppable.

Crying in front of other people can be a difficult thing to do. But, we're all human: at some point, it's just going to happen, and there's nothing you're going to be able to do about it. And that's OK, yo! Crying doesn't make you weak or over-emotional, just human. Plus, it's healthy to cry and let those feelings out once in a while.

Ask For What You Want

This applies to both alcohol (like in Arizona's case) and the more important things in life. Grey's has taught me that it's important to be direct and always ask for what you want, even when that's the difficult thing to do. There's nothing more frustrating than keeping your hopes, desires and expectations to yourself.

The Past Doesn't Define You — But It's What Got You Here

All of the characters on Grey's Anatomy have such spectacular baggage in the form of divorces, deaths, infidelities, career choices, and family dramas — and they're still standing. (Well, most of them. Apart from, like, those fifty characters that died already.) The things that happen to us are what make us who we are. But we can't cling to the past. We need to learn from it, and embrace the future.

I love that since Cristina Yang (Sandra Oh) left, Alex Karev (Justin Chambers) has stepped up to be Meredith's person. Friendship is so central to Grey's, and in spite of any relationship drama, it's people's friends that keep them strong, pour them another drink, and make sure they get out of bed in the morning when they're going through a difficult time.

It's OK If Life's Not Perfect

Even the most perfect relationships hit difficulties. Life throws curve balls no one expects. Fessing up when you've made a mistake, and taking some time to analyze the less-than-brilliant aspects of your life is exactly what grown-ups do. Feminism isn't about expecting life to be magical and amazing all of the time, but understanding that both men and women are flawed and don't always have the answers. Being honest about how you feel is a total feminist move, which shows you're strong enough to admit when you're wrong, and brave enough to start a dialogue about why things are the way they are.

Grey's Anatomy continues to deliver epiphany after epiphany, providing us with characters we can totally relate to. Seeing such fierce and unapologetic women on TV gives me total hope for the future, and gives me confidence to go after the things I want. And it's important to remember that gender is a non-issue when it comes to Grey's — the presence of strong, supportive people at Grey Sloan Memorial Hospital is what makes it a truly feminist place to work. And long may it be this awesome!