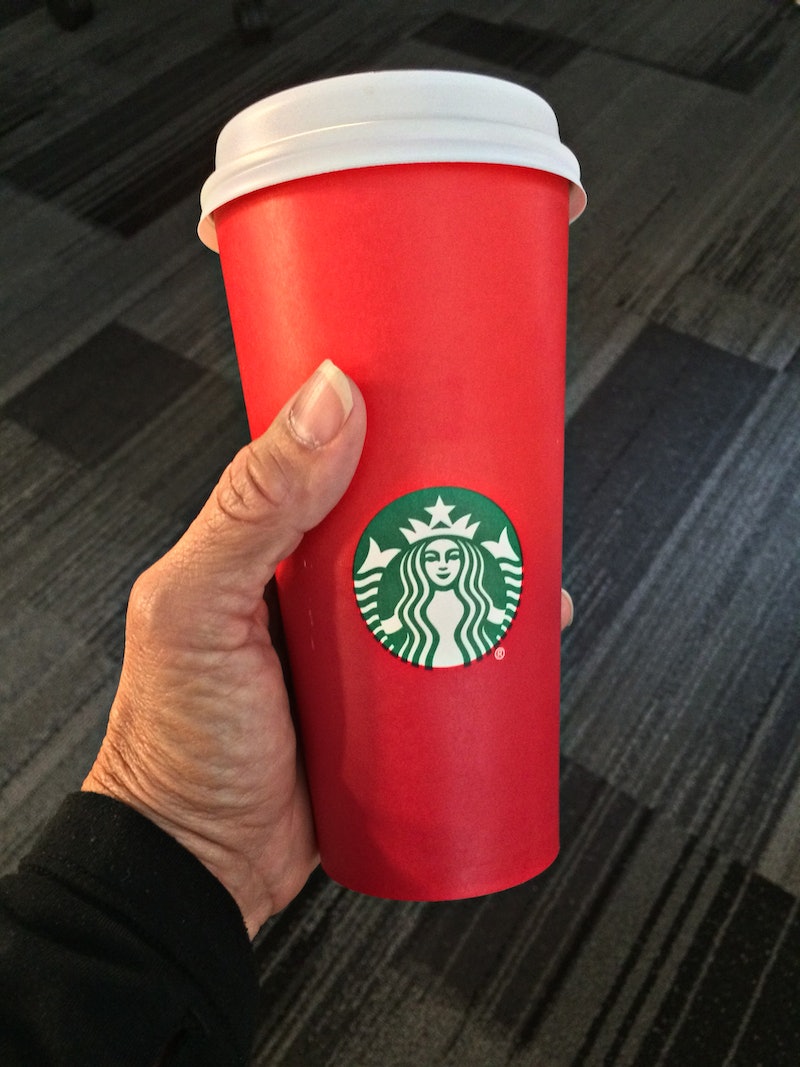 If you're anything like me, you woke up to the Starbucks red cup controversy earlier this week and took it as a sign that you should immediately roll over and go back to bed until the holidays are over. Unfortunately, that's only an option for bears and people with trust funds, so the rest of us are stuck pondering questions we'd never imagined pondering. Are people actually worked up about the design choices of middle America's favorite coffee chain? Does the presence of snowflakes on the outside of a cup somehow affect the taste of the PSL within? Is this a thing that is really happening?

Starbucks notes that the cup's design is about inclusion: In a statement provided to Bustle's sister site, Romper, a Starbucks spokesperson commented, "Our core values as a company are to create a culture of belonging, inclusion and diversity. Each year during the holidays we aim to bring our customers an experience that inspires the spirit of the season and we will continue to embrace and welcome customers from all backgrounds and religions in our stores around the world." However, the astonishing answer to the "is this really happening?" question is actually yes — some people are actually worked up about the Starbucks holiday cup's minimalist makeover. If you have somehow managed to avoid the craziness so far, or you blocked out the memories of its existence out of sheer incredulity, here's a quick refresher, as demonstrated through the many... shall we say, incredible Twitter-based responses.

Each fall, Starbucks releases special new cups to hold our sweet, sweet holiday-themed caffeine. Typically, the designs center around motifs like reindeer, snowflakes, or cute, whimsical swirlies to evoke the most wonderful time of the year. However, this year's cups featured no such designs; instead, the company went for a more minimalist look with a berry-to-red ombre effect.

You'd think that at worst, it's a little boring, but some felt the cups represented much more than just a change of design. Using the hashtag #MerryChristmasStarbucks, a few evangelical Christians took to the Internet to express their displeasure with the new cups, claiming that their design erases Christmas from the season — despite the fact that Starbucks never specifically promoted the holiday in the first place. Chief among the "Starbucks hates Jesus" crowd is Joshua Feuerstein, a former pastor who literally claims that Starbucks hates Jesus and instructed his followers to give their name as "Merry Christmas" to baristas in order to feature the holiday somewhere on the cups.

"The silent majority is sick and tired of consistently being bullied to be quiet about our beliefs and trying to remove Christ out of Christmas," he said on CNN earlier this week. (He was then thoroughly and hilariously put down by CNN contributor Pete Dominick, which you should definitely make time to watch.)

The #MerryChristmas controversy became so widespread that Donald Trump even commented on it, encouraging people to boycott Starbucks. "If I become president, we're all going to be saying 'Merry Christmas' again," he promised the crowd at a rally for his presidential campaign.

As vocal as the red cup haters may be, though, they're actually relatively few in number; a perusal of Twitter shows that they're far overwhelmed by incredulous users who claim the entire controversy is absurd.

In fact, the backlash against the #MerryChristmas crowd has been so pronounced that a new hashtag started trending, #ItsJustACup.

In all honesty, #MerryChristmasStarbucks is hardly surprising when you think about it; every year, it seems like there's a new holiday controversy splashed across the headlines as conservatives such as Sarah Palin and Bill O'Reilly continue to fan the flames of the supposed "War on Christmas." Giving them attention, and especially enough attention to warrant an entirely new hashtag and a firestorm of media attention, is exactly what they're aiming for. On the other hand, it's hard to resist the urge to react in the face of such utter insanity — particularly when they dare to attack the beloved creator of the PSL and provider of delicious, necessary caffeine.

Just remember that next year, the same crowd will find something else to get worked up about, and we can go back to enjoying our Peppermint Mochas in peace.