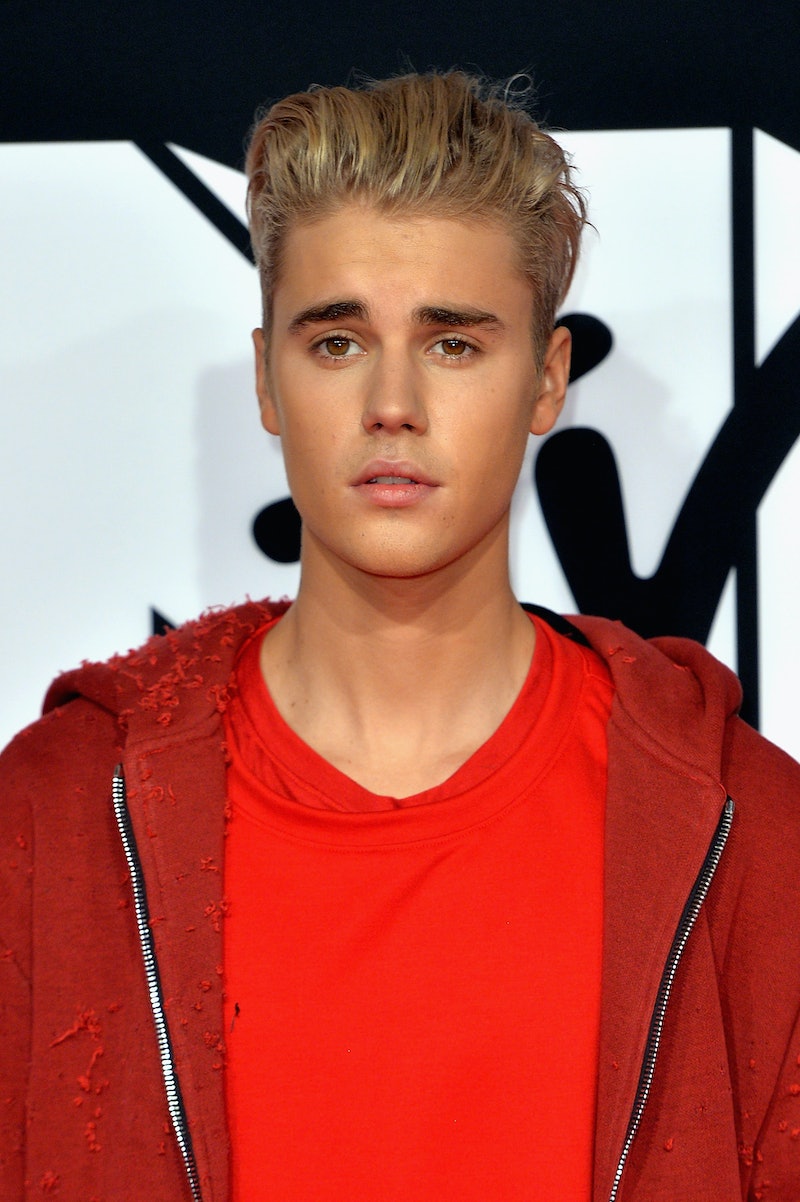 Somehow Justin Bieber has managed to salvage his career with his seriously catchy music. (Like, I won't even tell you how many times I've listened to "Sorry," because it's embarrassing.) Anyway, now that he is on the eve of releasing his newest album, Purpose, Bieber fever is in full effect and the subject of his love life is in the spotlight, too. This week, Ellen DeGeneres is hosting "Bieber Week" and because she likes to get to the nitty gritty, she asked him during his Monday appearance about his model friend, Jayde Pierce, who accompanied him to Bora Bora — you know, the one who was there by that now-infamous nude photo happened. Bieber got flustered when DeGeneres mentioned Pierce, so I have to wonder: Are Justin Bieber and Jayde Pierce dating?

During the interview, DeGeneres kept prodding and asking the 21-year-old whether he is dating the women who was with him in Bora Bora. In response, Bieber put his head down and told her, "Why are you putting me on the spot like this?"

Alright, Justin, don't be so coy. I am sure you knew these questions were going to come out. DeGeneres continued, "So you're just naked with your friend?" He replied, "Stop! You're making me blush, dude!" Well, to me this sounds like a classic friends with benefits situation, but let's take a look at some more evidence and see if the Biebs and Pierce are on their way to becoming a couple or if they're just having fun.

To take things back a little bit, instead of going to the Billboard Music Awards in May of this year, Bieber was spotted hiking in Los Angeles with a "mystery woman," who actually turned out to be English beauty video blogger, Pierce. She was definitely not shy in showing off pictures of herself hanging out with Bieber while she was in L.A.

Alright, so they've known each other since at least May, but how did they meet? Pierce actually opened up to The Mirror about her week with Bieber. In August, she sat down to give the publication an interview where she claimed that they'd been messaging on Instagram for four weeks and that he flew her out to L.A. when she was in the U.S. visiting Miami.

She said of their first meeting after messaging for a few weeks, “When I arrived he was sitting in the garden playing guitar — he just looked up and said, ‘Hey, how was your flight?’” Wow, Biebs, how romantic. She continued that after she left, “He’s messaged to ask how my flight was — it wasn’t a ‘bye forever’, it felt like ‘bye for now’ — if he came to London I’d see him... I haven’t heard him say he’s coming, but never say never.”

Well, about two months ago, she Instagrammed a photo of herself and Bieber together while he was in London, and next thing you know, she was documenting a trip to Bora Bora. I see you, girl, living the life.

Soon after, the nude photos of Bieber leaked and everyone was asking who the girl in the background was, with all evidence pointing to Pierce, considering she was also posting videos on Snapchat of Bieber on their trip. Now, with all eyes on her, the YouTube star has taken to her Twitter to defend her relationship with the singer and clear things up. She claims that Bieber is nothing more than a friend:

We know that Bieber has played up rumored romanced in the past as he also blushed when he spoke of his "What Do You Mean?" video co-star, Xenia Deli during an interview. Honestly, it just seems like Bieber is a young, single, twenty-something guy having fun with really beautiful women who like him, as well. So why not let him have fun?