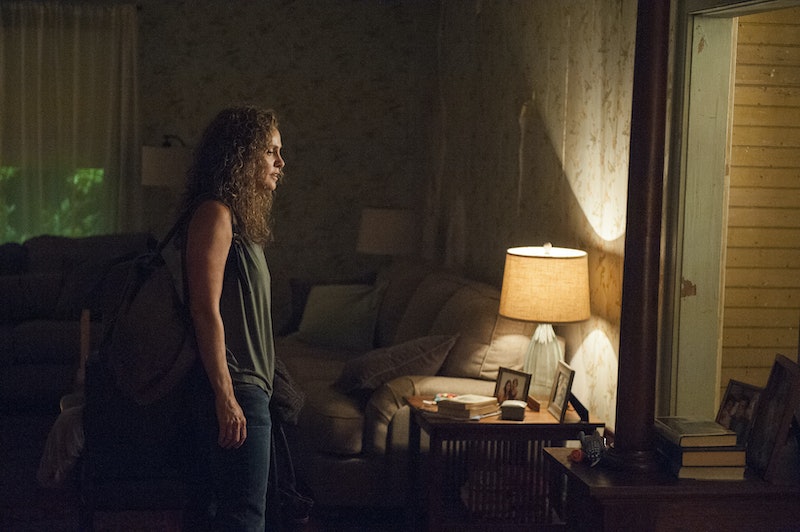 So far, Season 2 of HBO's The Leftovers has done a terrific job of replicating the success of the best episodes of Season 1 by focusing on just one character or storyline per episode, giving each one ample time to breathe. While this has produced some stellar hours, including the second Matt Jamison-focused episode of the series and last week's tense standoff between Nora Durst and Erika Murphy, this structure also means that there are some characters we've seen very little of. There has only been one episode out of six focused on the characters that didn't move to Jarden, TX (Laurie, Tommy, Meg), which made Laurie Garvey's arrival in Miracle such a welcome surprise this week.

She traveled all the way from upstate NY to the Lone Star State because her son Tommy was still missing, as we learned last week in her frantic phone call with Nora. Although Nora told Laurie that Tom wasn't with them, the former Guilty Remnant member apparently didn't believe her ex-husband's new girlfriend because she showed up unannounced at the gate to Miracle National Park. But when it became clear that Tom really wasn't in Jarden, one look at the handcuff on Kevin's wrist and her ex's generally crazy demeanor sent Laurie running again.

A bit later, after Kevin has reached his nadir in his battle against ghost-Patti (Nora has left him and Jill, still in the dark, is furious with him for it), the tables are turned as he's the one to show up unbidden at her door. He comes by her hotel in the middle of the night and confesses everything about his hallucinations — and, hey, remember how before the Sudden Departure, Laurie was a psychiatrist? Yeah, turns out going to his ex-wife for help was just about the smartest decision Kevin has made all season.

Laurie offered a refreshing voice of reason and claimed she could offer proof that Patti wasn't real. Patti never showed up when Laurie was around; since Laurie knew Patti personally, she would be able to ask Kevin a question only the real Patti would know the answer to. Feeling a bit better about things, Kevin asked Laurie if she would accompany him back home to continue helping him. Laurie was understandably reluctant, given that Jill probably still hasn't forgiven her for abandoning their family to join a cult. (She was right about that.) But when Laurie proposed that the proper course of treatment would be confinement to a psychiatric facility like his father, Kevin fled in the pursuit of a more... unconventional form of therapy.

So where is Tommy? And why have he and his mother had a falling out? Last we saw them together, at the end of Episode 3, they were scheming up a plan to offer Guilty Remnant members a reason to leave the cult by bestowing upon Tom fake Holy Wayne-like powers. Laurie told Kevin that everyone who hugged Tom always believed in his powers, so what caused the plan to fall apart? And will we ever see him — or Meg — again?

While the press release for next Sunday's episode doesn't offer any hint of that storyline, the press release for the ninth episode, titled "Ten Thirteen," does. "A personal loss and subsequent pilgrimage to Miracle offer clues on why Meg embarked on her path as a Remnant crusader. After a fallout with Laurie, Tom seeks to reunite with Meg." So Tom leaves his mother to pursue his rapist? It will be interesting to see how all of that plays out in a couple of weeks. (It's also interesting to note that "Ten Thirteen" is both the day before the Sudden Departure — Oct. 14 — and also the NYPD code for "officer in distress.")

As Season 2 enters its final three episodes, it seems like all the disparate storylines will finally start to converge in Miracle for a showdown of epic proportions.