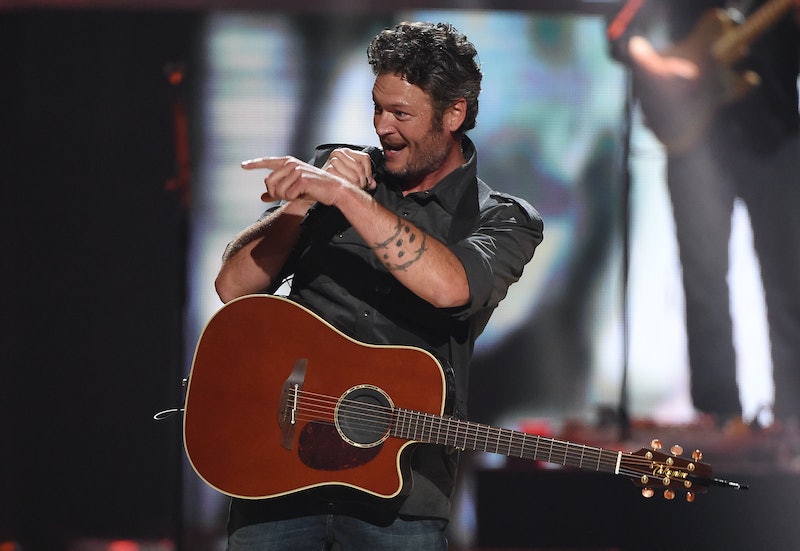 Not all heroes wear capes, and one celebrity is modern day proof of that fact. Over the weekend, while in Oklahoma taking a break in-between episodes of being a judge/mentor on The Voice , star Blake Shelton became a real-life hero, according to Entertainment Tonight. When he spotted four young men who had slipped into trouble, the musician stepped up to the plate in a major way, and showed just how great of a man he is even when no one is watching.

Although lately, the country mega-star has been making headlines for his newly announced relationship with pop star Gwen Stefani, this weekend's actions have him making news for something much more important. While enjoying some time away from the spotlight at a river near the Oklahoma city of Rivia, Shelton came across four men who were struggling, trapped inside of a mudslide. The four victims — Bryan Blanton, his cousin Lenyell, and their friends Adrian and Josh — explained to E! how the accident took place, saying:

"We were at the river looking and slid off into a mud hole for about two hours. Then me and my buddy Adrian started walking and Blake Shelton stopped and asked if we needed some help. He said he'd be back in 15 minutes with his tractor. He came back and got us out and chatted for a minute and talked to us about hunting," Bryar shared with E! News. "Blake is an all around good caring guy. "

Snaps for you, Blake Shelton! The singer could have easily just went along and minded his own business, but he took time out of his vacation in order to help these guys in distress. The men were extremely thankful, and asked the singer for a picture, posting it to Twitter in excitement.

To the guys' added pleasure, the "Hillbilly Bone" singer responded on Twitter, messing around and making light of the situation, letting them know that it was no big deal and that their slates are clear.

Not only does this random act of kindness show that Shelton is a great guy with great character, but it also shows that he is probably going to make an awesome boyfriend to his new partner, Gwen Stefani. A man like Shelton who cares for others and goes to huge lengths for complete strangers shows amazing promise of being a great partner. By the looks of things, Stefani has nothing to worry about with this one.

It's not every day that you read about a popular musician doubling as a rescue hero. It looks like Blake Shelton really is a jack of all trades. At least you know who to call when you're in trouble now!