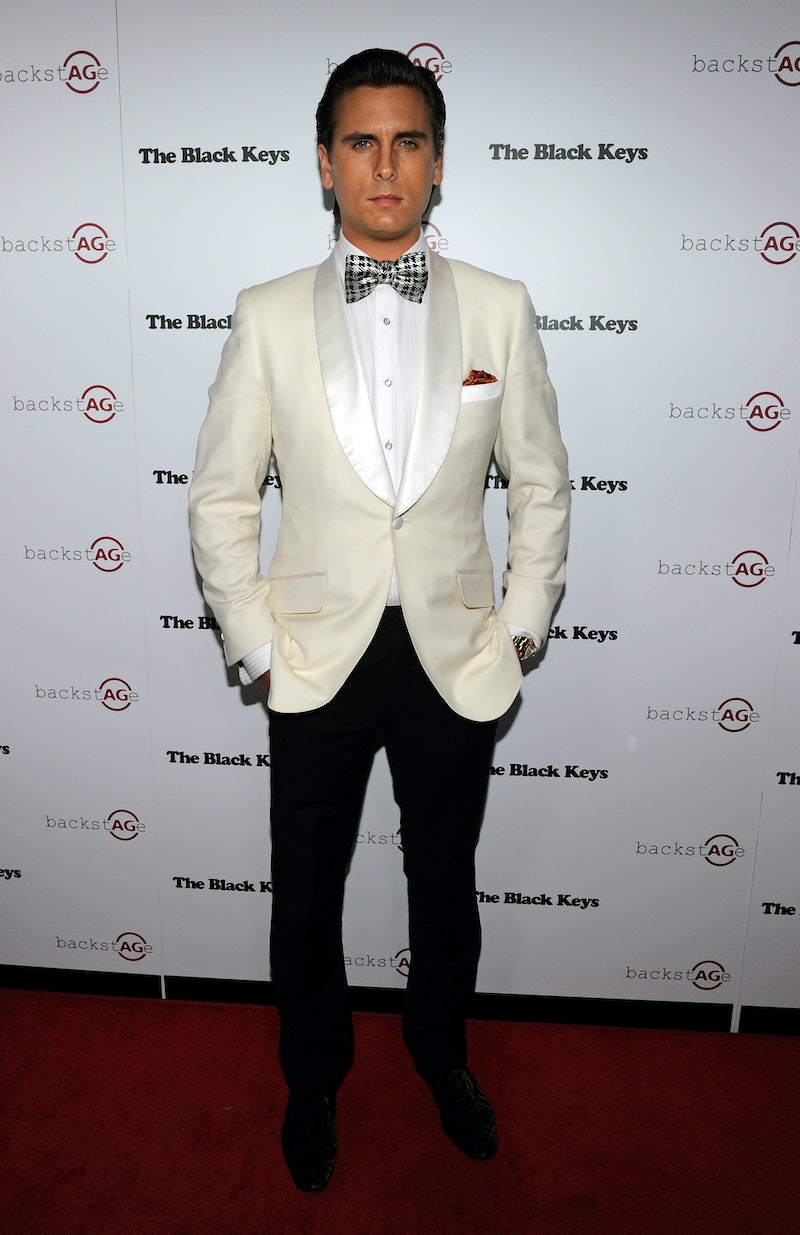 No wonder there's an entire TV series called Keeping Up With The Kardashians. Trying to keep track of what goes on in the lives of the Kardashian-Jenners is nearly impossible. There's always so much happening! So far in the month of November, Khloe Kardashian appeared on The Ellen DeGeneres Show, while Kendall Jenner walked the Victoria's Secret runway. Not to mention that Kris Jenner celebrated a major birthday and Kylie Jenner got a new tattoo. And that's only half the famous family, but you get the idea — they're a busy bunch. Amid all that, I can't help but wonder: What has Scott Disick been up to? According to recent reports, he's actually been spending time with the Kardashian family, which is very promising to hear. On Thursday, Scott Disick reportedly got dinner with Kris Jenner at a Japanese restaurant in Malibu, and then on Friday, he was spotted hanging out with Kourtney Kardashian at a book party.

Before you say, "Wait, isn't he in rehab?", the answer appears to still be yes. In October, news broke that Scott Disick returned to rehab for drug and alcohol addiction. According to E! News, an inside source says that he's "doing really well" and went on to say, "Scott is still in a rehab program and has been able to come and go as part of the recovery process." Similarly, People reported that, "[Scott] is committed to staying sober. He is happy to get his life back in order and is focused on being the best dad for the kids." The source also added that Scott is "really making an effort when it comes to the kids. [Kourtney] is starting to trust him more, but there are no talks of getting back together yet." That's great! No need to get back together at the moment. They should just focus on building back their trust.

All in all, this is wonderful news! First of all, it's great that Scott Disick is taking time to work on himself and really does seem to be sticking to that plan. It's been a rocky road for the reality star, but he finally seems to be on the right path. Even his Instagram shows a change — featuring more positive messages and scenic landscapes. No pictures of wild nights out or self-deprecating posts about his kids being one of his only sources of pride.

The fact that Kourtney Kardashian and her mom are supporting Disick is equally great. It shows that the family hasn't given up on him, which isn't surprising, given how they rallied around Lamar Odom during his hospitalization and continue to support Odom on his path to recovery. Even better news? This isn't the first time they visited Disick. Over Halloween weekend, Kourtney Kardashian reportedly brought the kids to see their dad in rehab. It sounds like family visits are a regular occurrence, and it's nice that his kids still get to be in his life.

While I can't imagine it's easy for the family to deal with these situations, Kourtney Kardashian is parenting like a pro. If her Instagram is any indication, she's constantly spending time with their three kids — Mason, Penelope, and Reign — and putting their needs first. Even though it was just a Halloween costume, Kourtney really is a Super Mom, and they're managing to move forward together as a family.

Here's hoping Scott Disick continues to feel better and that the Kardashians are there to keep supporting him along the way!