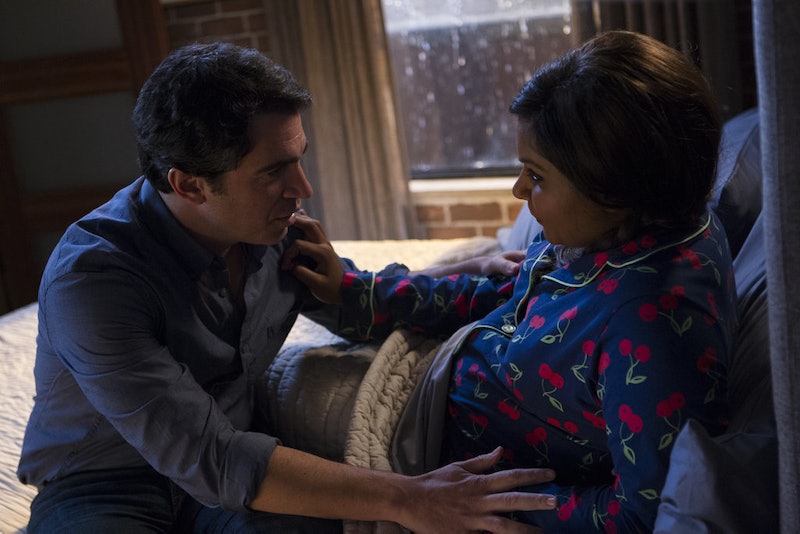 Ever since it moved from FOX to Hulu, The Mindy Project just hasn't been the same — although, mostly in good ways. Without the broadcast standards breathing down its neck, the show has been able to be racier with its punchlines; its episode count has been increased to a whopping 26 per season; and, of course, Mindy herself is now a mother to adorable baby Leo. But there's one way not-so-great way in which The Mindy Project hasn't been the same lately... and that's the inexplicable absence of Dr. Danny Castellano, aka the world's most grouchiest heartthrob.

For three episodes now, ever since his epic road trip with Morgan, Leo's baby daddy has been mysteriously missing in action. We've heard his voice occasionally over the past few weeks, but no glimpse of that grumpy Italian mug in sight — and viewers are getting understandably impatient! Without any sort of formal announcement from the show itself, we're left to assume that Chris Messina is temporarily busy filming Live By Night , a film directed, written, and produced by (and starring) Ben Affleck, also featuring Chris Cooper, Gillian Anderson, Zoe Saldana, Sienna Miller, and Elle Fanning.

But as great as it is to hear that Messina's film career is thriving, it's unacceptable that we've had to sacrifice our Danny Castellano quotient. The Mindy Project needs to bring the dashing doctor back pronto, and here are 22 very good reasons why.

And proud of it.

2. He Looks Good In Anything

3. He Also Looks Good In Nothing

4. He Shares Our TV Obsessions

I bet he's a Game Of Thrones fan, too.

5. He's Down To #NetflixandChill

I wanna share this show with you. It's called The Mindy Project. You'll love it, especially this guy Danny. He's amazing.

That's still more dignified than my most recent foray into a haunted house, tbh.

7. He Knows The Importance Of Snacking

Even if his particular choice of snack foods leaves a little to be desired.

Don't steal from Lady Liberty. She will snatch yo wigs.

9. He's Proud Of His Heritage

Even when it doesn't bring out the best in him.

Don't try to fool Danny Castellano. He sees right through you.

Even when he probably shouldn't be...

12. He's Got His Priorities Straight

And his dorky glasses are super cute, too.

14. He Enjoys A Good Makeout Sesh

No floor is too grimy for Danny Castellano.

16. He's An Even Better Stripteaser

17. His Milkshake Brings Us All To The Yard

That is a fine piece of man butt.

So he sweats a little, nbd. Nobody's perfect, you guys.

I literally can't even.

When Harry Met Sally? More like When Danny Made Us All Swoon.

So passionate. It's the Italian in him, obvi.

And I need him back in my life, STAT.