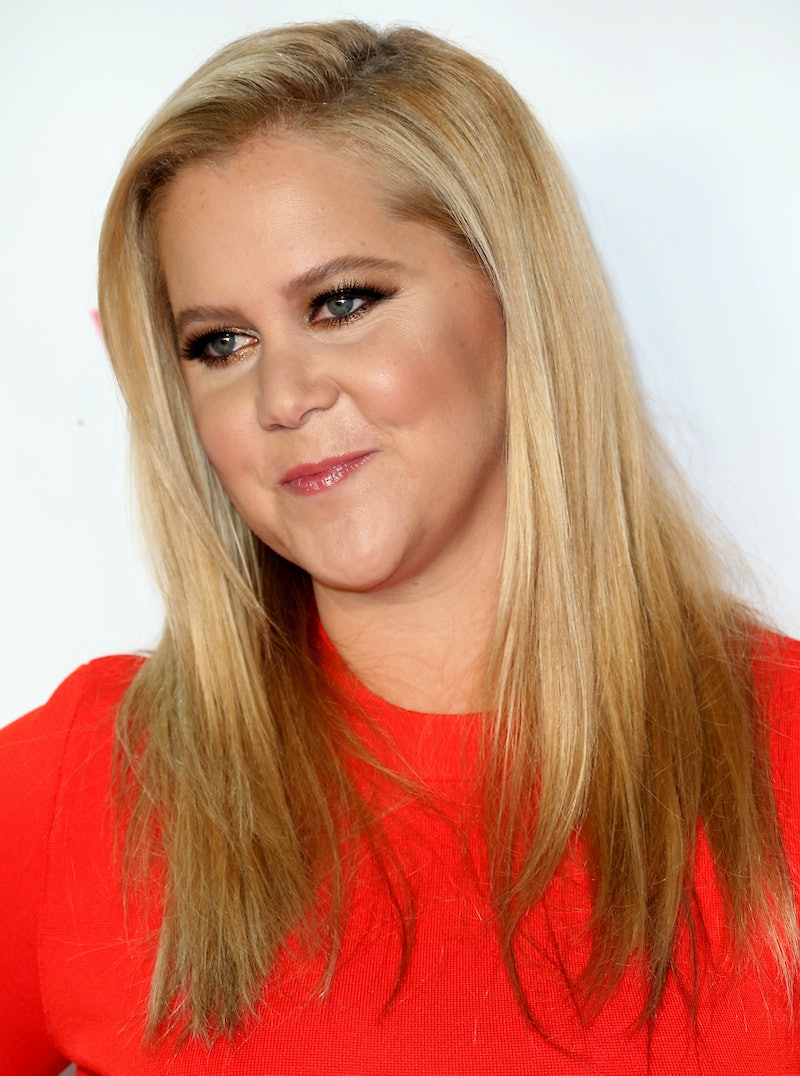 From her hilarious TV show Inside Amy Schumer to her hit movie Trainwreck, there's a lot to love about Amy Schumer. The comedian isn't afraid to speak her mind and stand up for causes she believes in. That description is also relevant to another female celebrity — Amber Rose, who recently redefined the phrase "walk of shame" and held her own SlutWalk to protest rape culture. Combined, these two are a feminist dream team. And even better news? Apparently they're good friends. On Sunday night, Amy Schumer and Amber Rose hung out at the VH1 Big In 2015 With Entertainment Weekly party. On the red carpet before the event, EW asked Amber Rose about Schumer. She said,

Being on set with Amy is pretty amazing. She’s constantly funny. It’s not an act she puts on, it’s really her personality. It’s a lot of laughs, a lot of fun. She’s all about girl power. I love it. She’s a great friend.

By "being on set," Amber Rose is likely referring to when they starred in the "Milk Milk Lemonade" sketch together on Inside Amy Schumer . After hearing this, I'm all about this friendship. These are two strong women who don't apologize for being themselves — and that's awesome! I'm pretty sure they could teach everybody a thing or two about self-love and confidence.

In case you don't believe me, here are a few highlights from their friendship that prove Amy Schumer and Amber Rose are definitely BFF goals.

Jokingly, Amy Schumer wrote in the caption about how they're working on Amber Rose's confidence. Clearly that's not a problem for either of these ladies as they sip their wine with pride. Cheers!

Once again, Schumer joked in the caption that Amber Rose stole the spotlight. But let's be real — they both look flawless here.

Confessing Their Love For Each Other

During the event, Schumer got on the microphone to promote Amber Rose's new book, How To Be A Bad Bitch . In the caption, Amber Rose said she loves Schumer back. Awww!

As mentioned earlier, these two teamed up for Schumer's "Milk Milk Lemonade" video on Inside Amy Schumer. It's hilarious and glorious, all at the same time.

Here's hoping this is just the start of AmyBer RoseMer. (Can we call them that from now on?) I'd love to snag an invite to their next hang out!

More like this
Photos Of The 'Elvis' Cast vs. Their IRL Counterparts Will Have You All Shook Up
By Grace Wehniainen
Selena Gomez Is Fine Being Single, But She Still Manifested Romance On 'SNL'
By Martha Sorren, Jake Viswanath and Jack Irvin
Eva Mendes Just Claimed Ryan Gosling’s “Ken” Underwear
By Rachel Mantock
Ralf Little’s Fiancée Has A *Very* Impressive Resumé
By Sam Ramsden
Get Even More From Bustle — Sign Up For The Newsletter