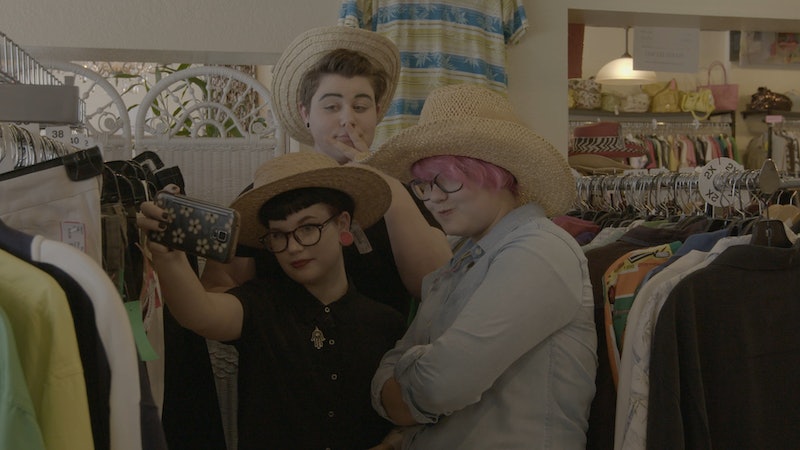 In honor of Transgender Awareness Week and as part of its "Look Different" initiative, MTV's True Life: I'm Genderqueer premiered on Nov. 17. The episode followed two genderqueer people as they navigated ways to explain their identities to their parents — and it was nothing short of groundbreaking. Oftentimes when media outlets cover stories about queer humans, the coverage centers on cisgender or transgender folks, as well as those who exist within the binary and identify as a man or a woman. But MTV is putting a spotlight on the less talked about gender non-conforming population, giving visibility to a group that has been largely invisible to the public eye until this point. And as a genderqueer person, this satisfies me immensely.

From discussions of pronouns and gender presentation to buying your first chest binder, "I'm Genderqueer" covers a lot of ground in regards to the genderqueer experience. The show follows Jacob Tobia, 24 (whose pronouns are they/them), and Brennen Beckwith, 17 (whose pronouns are he/his), who both have equally compelling stories to tell and are fast becoming beloved voices for the queer and genderqueer communities.

Tobia is a writer, public speaker, and LGBTQIA+ activist who spends their time educating others about gender identity and being "a gladiator for gender equality," as they mention in the episode. Beckwith is a senior in high school, and uses his YouTube channel as a platform for discussing gender and non-binary identities.

Both people are clearly passionate about creating awareness of the fluidity of gender, in the hopes that their stories offer comfort to other gender non-conforming individuals as well as support for allies.

"It's really something that we should be talking about and that kids and adults are really confused by," Beckwith tells me in a phone interview. "Everyone can really use a conversation about gender."

Of course, they also seek to normalize gender non-conforming identities and generate visibility and tolerance for the genderqueer community.

"I feel that every time we share our stories, as queer people, trans people, or gender non-conforming people, we breathe into being a world where we don’t have to be seen as somehow other or outsider in a way than any other person is seen that way," Tobia tells me on the phone. "I think for me it’s about creating a world where [genderqueer] isn't seen as something so different or so out of the ordinary, but as something that is unique and beautiful for its uniqueness."

Both Tobia and Beckwith are used to speaking about their identities on multiple platforms, but sharing their story on True Life was a different experience entirely. For Tobia — a person used to giving interviews about their activism and reducing their identity to talking points — it was an incredibly intimate experience.

For Beckwith, who is used to having complete control over his narratives and the editing process of his YouTube videos, filming True Life was a very different experience.

For many, it can be very difficult to be honest about their identity with family or friends, let alone with millions of viewers on national television. But the two were endlessly rewarded by putting their trust in the hands of MTV producers.

Tobia, whose father was initially hesitant about all things regarding their gender identity and presentation, felt that True Life helped them move forward with their family in terms of feeling comfortable and accepted.

"The beautiful thing about it was having my father participate in the True Life process; it really validated my identity in his eyes," Tobia tells me. "It really helped him understand [that] if MTV is interested in filming our family because [I'm] genderqueer, being genderqueer must be a real thing!"

Having these conversations on camera and facing their father's confusion over Tobia's identity helped bring the two closer.

"I had never explained gender to my own father," they tell me. "And so I realized that the fear of rejection had kept me from sharing information that he needed to know in order to understand who I am. And so what was beautiful about the process was that it pushed me to just explain again to my dad who I am, and it provided accountability so we wouldn't start screaming at each other because then we’d look really stupid in the episode."

The show also facilitated a space for Beckwith to come out to his parents for the first time about being genderqueer, and for him to explain his identity to them.

"Coming out to [my mom] was so natural for me," says Beckwith, "And having the crew there was just kind of an extra thing and the only time that we both forgot the cameras were there."

At first, Beckwith's parents were slow to pick up on using his pronouns, as well as his chosen name "Brennen" (as opposed to his birth one). But as they discussed it more with Beckwith and learned from a support group for parents with non-binary kids, they slowly improved.

"I put a lot of pressure on my parents to get it right because they're my parents and I really want them to care about me and understand me," he says. "But in reality, your parents are the ones that are going to take the longest to get used to it because they've known you as one thing for your entire life. My parents have been so good about it. Yes, they call me my given name every once in awhile, but I know now that they understand who I am."

Patience can be hard, especially when being misgendered and unrecognized for who you truly are. But Tobia and Beckwith fight everyday to be recognized and to maintain good relationships with their loving parents.

Tobia hopes that genderqueer people walk away from the episode with a feeling of validation, and that their story speaks to others who can relate to the experience.

"For any trans or genderqueer people watching," they say, "I just want them to know that they are so beautiful and deserve the world and deserve to live in a world that respects them and loves them and celebrates them."

They also both hope to educate the loved ones and allies of genderqueer people through the show, and help them fight any shame or ignorance that may be holding them back from understanding their children.

"I hope they can see families in the episode learning to claim and love their family members who are non-binary and genderqueer," they say. "And let go of whatever is stopping them from loving the people in their life."

"I want parents to see that we are people too," Beckwith adds. "We aren't freaks, we're not crazy. We’re people, and we’re just living our lives."

To see two genderqueer people like myself share their experiences so bravely with millions of other viewers is nothing short of encouraging. It's a reminder of how important my own work and that of other genderqueer and non-binary activists truly is. Additionally, Tobia and Beckwith have inspired me to be more patient with my own parents and to remember that even though they may not understand my identity completely, I'm lucky to have their support and love for me and my identity.

For more information on gender identities and resources for non-binary people and allies, you can go to lookdifferent.org/genderqueer.