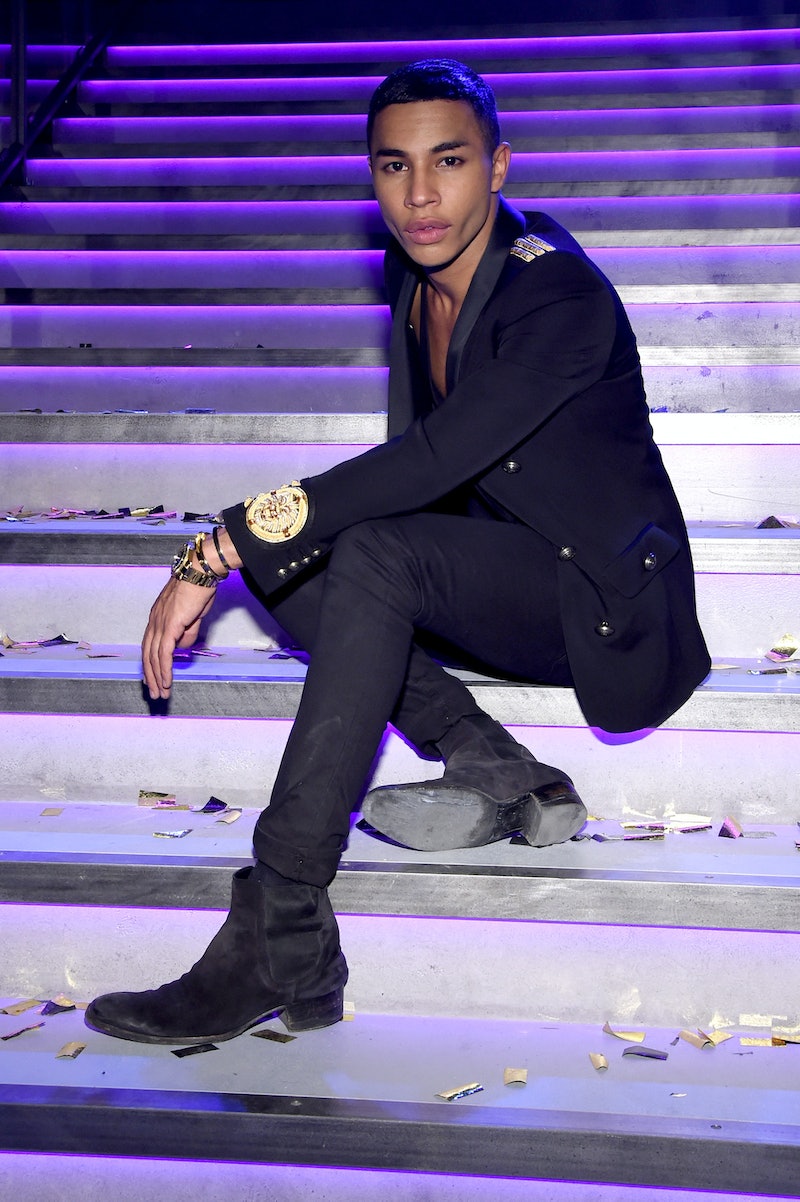 If there's one designer who represents a new generation of Parisian chic, it's none other than Balmain's Olivier Rousteing. The man behind one of the most coveted luxury brands in the world proudly calls The City of Light his home, but Rousteing also witnessed the Paris terrorist attacks that occurred on Nov. 13. In a heartbreaking interview with Vogue, the 30-year-old designer recalled the moment when he realized that his beautiful city was under attack, the terrifying hours that followed, and the power of social media.

"I was in my office having a conference with my assistant as we are working on pre-fall," Rousteing said. "One of my assistants heard the news and we immediately all turned on the news to see what was happening. My immediate reaction was to close the office doors and call all of my interns and assistants and people close to me and tell them not to go out. I then took to Instagram and posted #PrayforParis and then went on Facebook and made sure people knew where the unsafe zone was."

Much like other celebrities who reacted to the Paris attacks, Rousteing took to social media not only to keep up with what's going on, but to also offer support to the victims and their loved ones. It was also a way for the young designer to feel some sort of connection to others even though he felt as if his entire world was crumbling around him. His story has such a stark contrast to the truly amazing year he's had so far. Rousteing's firsthand account of the tragedy that claimed the lives of 120 people is a chilling reminder that there truly are events beyond our control, but that there's also hope and love to be found even at the darkest of days.

Here are excerpts from Rousteing's Vogue interview that serve as a firsthand account of what it was like in Paris during the terrorist attack:

"It Was Going To Happen Again"

After hearing the devastating news, the designer briefly went home for safety, although he immediately transferred to a hotel in fear of more attacks. "I went back home, but I couldn't stay there, Rousteing said. "I didn't feel in danger, but lying there listening to sirens I felt like it was going to happen again. I needed to go somewhere that I could switch off."

"I Don't Have Anyone"

Even with celebrity pals like Jennifer Lopez and Kim Kardashian, Rousteing said that the hours following the attacks made him feel isolated and scared. "I don't have anyone in my life here — no family here, no partners — and so I needed to be where people would look after me. My assistants and colleagues went to their boyfriend's or girlfriend's or parent's — I don't have that here."

Rousteing has a personal connection with Bataclan Concert Hall, one of the multiple locations attacked by terrorists on Nov. 13. "I used to go to the Bataclan," he said. "It's just so unexpected... To target a club full of people enjoying themselves — it's just so random. We were watching places be attacked that all of us young go to chill with our friends. It's strange, you don't feel safe anywhere."

A proponent for diversity not only in the fashion world, but for all mankind, Rousteing echoed the feelings of so many who was left feeling helpless after the attacks. "No matter if you're gay or straight, it doesn't matter — we just want the best for our generation. Paris is free — it has expression, freedom of speech — so we want to fight for our values, but we don't know how much we can fight. We are scared."

"Be Positive And Keep Believing"

But even after one of the darkest chapters in the city's history, Rousteing remains hopeful that Paris will continue to shine and let the terrorists know that they haven't won. "I think it's important to show that Paris is beautiful. When you looked at Instagram immediately afterwards, it was filled with pain. I wanted to show the beauty. We [Parisians] try and see the sun after the storm. We can't put Paris into the storm. We need to be positive and keep believing, but of course to never forget. I work in fashion, in a world where we are selling the dream. I want to show a beautiful world, and so my way of fighting will be to keep up that strength."

There are several ways help the victims of the Paris attacks, from donating to the Red Cross and other organizations, to donating blood, to keeping an eye out for hashtags that show your support for those affected.

More like this
23 Times Meghan Markle Dressed Just Like Princess Diana
By Bustle UK
For These Abortion Clinic Volunteers, Going TikTok Viral Is A Risk Worth Taking
By Audra Heinrichs
Olivia Rodrigo’s Song Dedication To 5 SCOTUS Justices Sent A Strong Message
By Grace Wehniainen
5 Ways To Stand In Solidarity With Women In America From The UK
By Sophie McEvoy
Get Even More From Bustle — Sign Up For The Newsletter