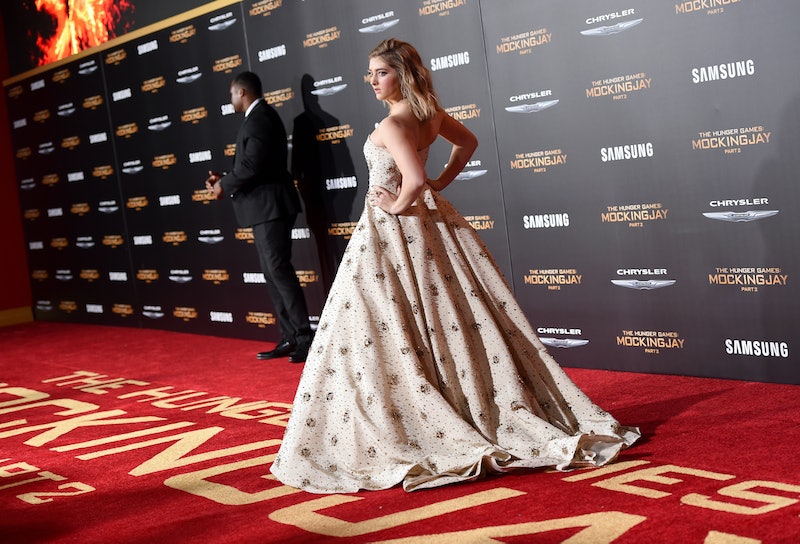 We all knew Jennifer Lawrence was going to kill the press tour for The Hunger Games: Mockingjay, Part 2, but this isn't about her. She's not the only one slaying that same red carpet. In fact, pretty much the whole Hunger Games cast has amazing style. With the final film in the franchise premiering this Friday, the cast has been making tons of appearances and the looks they've sported are drop-dead-gorgeous. From Jena Malone to Josh Hutcherson, to Willow Shields, the cast has been bringing their style A-game to close up the series with a bang.

Lawrence is stunning, charming, and has impeccable style, but her fellow cast mates have been absolutely killing it on the press tour for Mockingjay, Part 2 and it's kind of wonderful. While Lawrence typically wears classically beautiful ensembles, her fellow cast mates have made it clear that they aren't afraid of taking fashion risks, making big statements, and wearing fabulously beautiful clothes. I do love me some J. Law red carpet looks, but I think it's time we give her cast mates some props, too.

Let's take a look at some of the best The Hunger Games: Mockingjay, Part 2 press tour looks. Prepare to be totally impressed and absolutely amazed. Even though this list doesn't include J. Law, I promise you won't be disappointed.

Little Primrose isn't so little anymore! In fact, with this gorgeous strapless gown on, she could really give Lawrence a run for her money. Doesn't she look stunning?

But really, this gown is beyond.

Rue may have been adorable in the original Hunger Games movie, but she's all grown up now, and she's rocking this gorgeous, bright blue dress flawlessly.

There's no doubt that Enobaria was beautiful to begin with, but look at this! Teach me your ways, Golding.

If I needed any more reasons to be #TeamPeeta, this dark maroon suit would definitely be one of them.

Wow. This look is so gorgeous, I'm literally speechless.

A new addition to the cast, Moore plays President Alma Coin in the film. She has well-established style chops, but Moore's white fringed dress did not let me down.

Lieutenant Jackson really knows how to rock a statement gown, doesn't she? Forbes looks stunning in this silver metallic creation.

Nothing to see here, just Hemsworth being super dapper in a navy suit.

Clafin really knows how to work a vest, tie, and suit.

I wouldn't normally be a fan of this architectural, graphic dress, but since Dormer is wearing it with such poise and confidence, it really looks fabulous.

And while I wouldn't necessarily call this look a winning one, let's give an honorary award to Harrelson for standing out. At least he's got enough confidence to wear his pajamas to a major movie premiere. Yolo, Woody. Yolo.