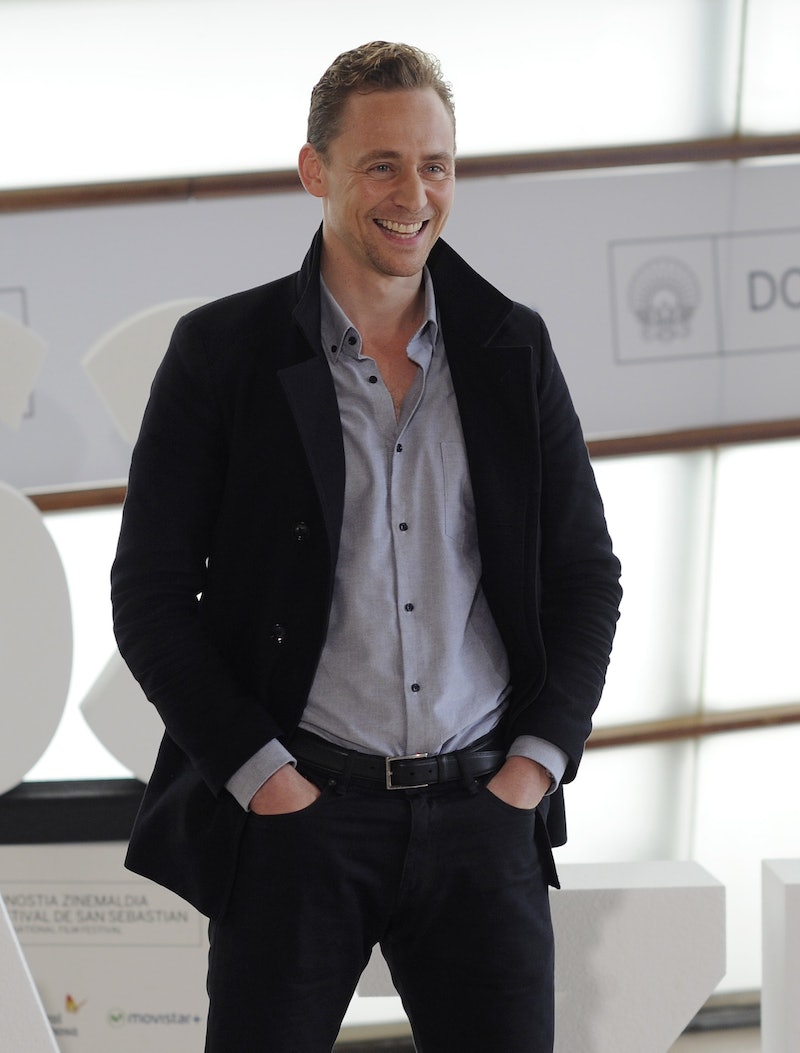 During Tuesday night's broadcast of Jimmy Kimmel Live! People's choice for the 2015 Sexiest Man Alive will be unveiled by, you guessed it, Jimmy Kimmel. That means Chris Hemsworth's reign will come to an end, but another handsome actor will step into his shoes. So, who's it going to be? Any guesses? The most obvious is Chris Pratt, right? But ss much as I love the Guardians of the Galaxy and Parks and Recreation actor (and I mean LOVE), Tom Hiddleston should be the Sexiest Man Alive. Who doesn't want to see him on that cover? If you raised your hand, we can never be friends.

T. Hiddles has all the criteria needed to hold this very prestigious position. Plus, if he doesn't score the title and isn't shown gracing that cover, People might just find a riot outside its offices come Wednesday led by none other than Hiddleston's fans, the Hiddlestoners. Wow. That sounded way more dramatic than I intended — I'm sure Loki would approve.

I think it's pretty obvious as to why Hiddles should be known worldwide as the Sexiest Man Alive (ahem... have you seen his face?), but here are a few more reasons why.

Hiddleston is sexy in a million ways, and obviously that includes his looks. Most importantly, what's sexier than someone who can dance, someone who fights for gender equality, and someone who stands up for what they believe in? The answers is NOTHING.

From Crimson Peak to I Saw the Light to High-Rise, Hiddleston's has released (or is preparing to release) some very exciting films this year. If he doesn't get an award for his acting sexiness, then someone please give him an Oscar already!

3. Have You Seen Him On A Magazine?

4. So Many Copies Would Sell

Can you imagine how many copies Hiddlestoners would scoop up? People, you'd be very happy with the results.

5. His Acceptance Speech Would Be Out Of This World

He never fails in offering up words of wisdom. He has some of the best quotes to live by. Can you imagine what he'd have to say about becoming the "Sexiest Man Alive"? I have chills just thinking about it.

6. He's Exactly What People Is Looking For

People's Managing Editor Larry Hackett told ABC in 2010 that when it comes to crowing the Sexiest Man Alive this is what it takes: "We know it has to be a mix of someone who's hot but well-known. Not too young, not too old and somebody who, frankly, maybe we haven't thought of." He added, "Sexy certainly has to do with someone being good-looking, and has to do with a certain kind of romantic, flirtatiousness physical appeal that may be beyond just academic appreciation of the way they look. We want some mystery in our sexiness." Doesn't that have Tom Hiddleston written all over it?

If he doesn't earn the title, it's OK, because Hiddleston will forever be the Sexiest Man Alive to me and his die-hard fans.