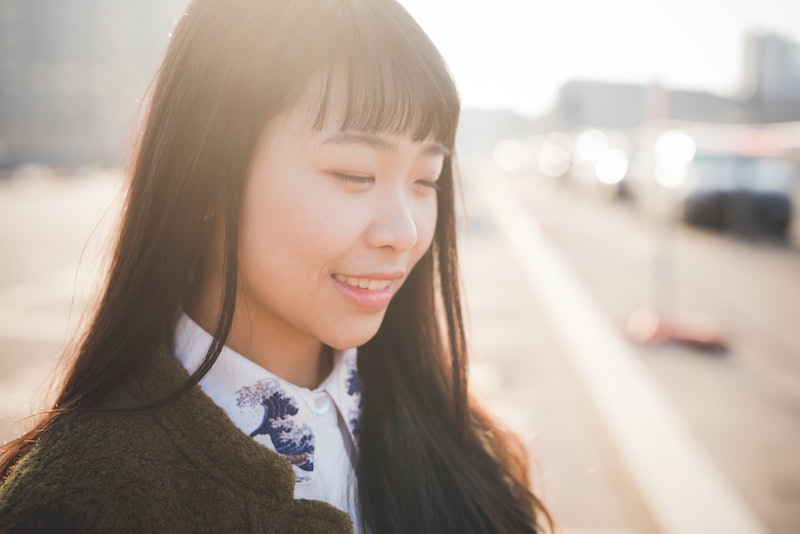 If you're single for the first time in a long time, you probably have approximately 10,000 questions about how to get back into the dating game. What works? What really doesn't? Do you have to date online or use dating apps? How do you even use them? When is the right time to dive in full force? What should you be careful about at first? How do you deal with disappointment? And most importantly, how do things even operate these days?

I asked all of these questions of Stefanie Safran, Chicago's "Introductionista" and founder of Stef and the City, who knows a thing or two about matchmaking. Yes, there are plenty of things to keep in mind when you start dating again, but before you start panicking, remember that you can go as slow as you want. There are no rules, though are some helpful suggestions to keep in mind, which might alleviate your anxiety a bit and put your mind at ease. There's also no rush to start dating again, but if you feel ready, Safran walked me through the steps — from how best to make a dating profile to how to deal with disappointment. Here are 16 baby steps toward hopping back on the wild stallion that is the dating game.

1. Figure Out What Works For You

First off, it's wise to try several online dating sites, both paid and unpaid. There are so many dating apps out there right now, it can make your head spin. When you settle on some, remember that this is supposed to result in a good time. Safran suggests trying out dating apps for fun, but don't worry if they don't result in anything special right away.

Make sure you're posting recent photos that aren't too sexy, Safran says: "Too sexy equals more unwanted and uncomfortable emails." Plus, if you're trying to get back in the dating game, it's wise to figure out what your desires really are. Even if you're just hoping to hop into bed with someone, sexier photos will likely yield partners about whom you're less keen.

In dating as in life, positivity counts. "Creating a good, positive profile" is important, Safran says. "Don't put what you don't want — just focus on what you do want." And you don't have to do this alone; in fact, it's way more fun to enlist a friend's advice. "Ask for help in writing your online dating profile," says Safran. If it feels totally overwhelming, it might be worth it to have a professional help you out.

Safran says not to expect that you'll only be going on amazing first dates. There will be some duds out there. But amidst the lame first dates will be one or two or a few good ones, and those will make it worth your while.

I think we should have high standards — I don't believe in settling. I only want to be with someone who really makes me feel excited and happy to be with them, and I want the same in a partner. Safran says that it's unrealistic to expect that you will always finding people that meet your criteria. This doesn't mean that you need to lower your expectations though. "Being reasonably picky means you will have droughts," she says. Nothing wrong with that. Let dating complement your life, and not the other way around.

If you're only looking to meet men or women who are within a few years of your age, you may hit some roadblocks, says Safran. "Give [people] who are eight to 10 years older a chance," she says. I'd add that there's nothing wrong with going younger, too. If you're open-minded, you'll have a way better time with dating. The same goes for other things. Say you've only dated girls with dark hair until now, and tend to find yourself most attracted to that look. Maybe it's time to try a few dates with someone who doesn't have your classic vibe, but has really nice eyes. Similarly, if you're "only willing to meet men who are 6'0" and up, that is eliminating 86 percent of the population, including Brad Pitt, George Clooney and Matt Damon," Safran says.

7. Be Ready To Reroute

Say you've been on Tinder for a month and you've quickly tired of mindless chatting. Don't be disappointed too quickly — instead, call in the forces. "Ask around for the good online dating sites in your area," she says. Look to friends who met their partners on apps or online, and find out what they did. "Keep in mind sites that were good five years ago may not be as good now," Safran says. And remember that different apps are better in different areas, not to mention that availability differs from place to place.

I know it's shocking, but people still meet IRL every day. (That's what has always worked for me, though I did have a short stint on OkCupid once upon a time.) See if friends or acquaintances have anyone to set you up with, Safran says. "Don't worry if it takes months before they have someone." In the meantime, go out. Go to yoga. Go to the movies. Take yourself to dinner. Masturdate. Go running. Read books in the park. If you have a dog, take it on long walks. You'll meet someone. Which reminds me . . .

I can feel your anxiety through the screen as you read this. But it feels so overwhelming! Dating sucks! How will I ever find someone awesome?? I hear you, girl. I have been there. Dating can feel exciting and fun at first, but it can also quickly lose its charm. Whenever you feel this way, take a deep breath and remind yourself that you are so cool, right now, in this moment. You are whole and weird and fabulous and wonderful, and really interesting. Because we all are. And someone will take the time to learn all about you. It just might take some time.

10. Don't Throw Caution To The Wind

If I may take this moment to make a public safety announcement: Dating online has become de rigueur, but that doesn't mean it's always safe. The same can be said of dating in general — even if you meet someone face to face (and not online), it's best to proceed with caution. "Don't give out your last name [online]," says Safran. "If you have it listed on your cell phone, make sure to get a Google voicemail until you know the person better."

Choose a locale that is good for you, but don't suggest your favorite eatery, bar, coffeeshop, or whatever. If the date doesn't go well, you don't want to have introduced your boring/annoying/horrible date to your best-kept secret. Then again, Safran also says to avoid going to places that are too far are outside your comfort zone in case your date flakes out. Suggest a spot that you don't frequent all the time, but that you're familiar with, and go from there.

12. Prepare For A First Date

Get yourself in the right mental headspace when you're going on a first date, especially your first few first dates after deciding to get back in the game. Before the date, take a bath, spritz on your favorite perfume, meditate, take a walk, go to the gym, have coffee with a girlfriend — choose your own adventure, just do something that makes you happy, lowers your anxiety and sets you at ease. When it's time, slip on something that makes you feel good and pound the pavement. But even if it goes well, "don't assume that a first good date always leads to a second," says Safran. "Make sure that you are OK with dating different people until you have spent enough time with someone to know that it's really going somewhere."

13. Date More Than One Person At Once

When I asked Safran what women do most successfully when they're getting back in the dating game, she put "dating more than one person" at the top of the list, just after dressing well. "I've seen way more women comfortable with multiple dates than men," she says. She also has seen women "giving people a second chance — women find sometimes that someone is better looking/funnier once they get to know them." If you date more than one person simultaneously, you'll get a chance to see what you like — and what you don't.

So you've got a fully functioning dating profile on a site or app or two, you're going on dates, you're meeting a couple people of interest and maybe you're even finding yourself really into someone. Don't fall into the analytical pit of hell that I call "the text trap." There was a great piece about this in New York magazine recently. Says Safran, "Talking too much on texting and talking to their friends about what a text means" is a common dating pitfall. But it can be avoided. By not doing it. So don't, and see what happens.

"Rome wasn't built in a day," Safran says. "Neither is finding the right person." The best way to be patient, she says, is by finding a "dating buddy," or "someone who you can call and vent to when things aren't going great." This could be a friend who is also on the dating grind, or just a pal who has had the experience of dating, knows what it's like, and always wants to listen.

"Make sure you have other things going on, like going to the gym and going to events," says Safran. "Keep busy and don't solely focus on dating." And go as slowly as you want. Safran also suggests taking a break if you need one. I call them "dating freezes," and they are necessary. Whether you take a breather for a week or a month or longer, it's wise to take self-imposed time-outs while dating.