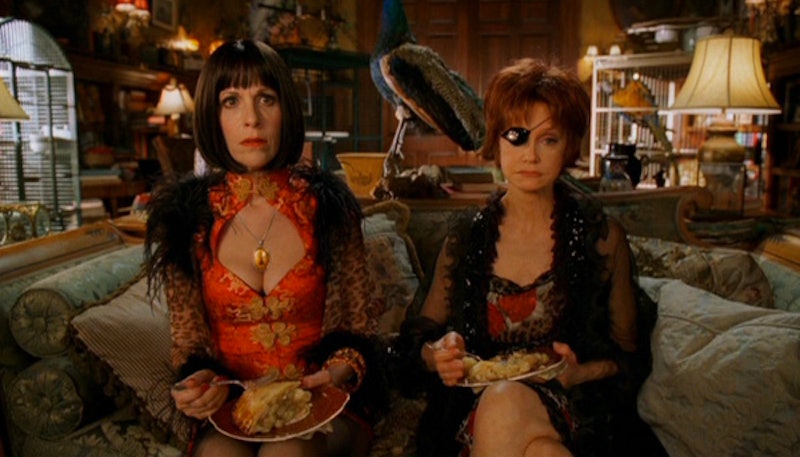 Thanks to all the pies and color scheme that would make Wes Anderson squeal with delight, it is easy to forget Pushing Daisies was often heartbreaking. The very first story the series told was the tale of how Ned discovered his ability to raise (and un-raise) the dead in the most devastating manner possible. From that moment on, whenever family was involved, Pushing Daisies brought the pain. Family estrangement was a major theme throughout the show's run, and, in the fantastical world where the Pie Hole existed, it was also the show's most realistic touch. Leave it to creator Bryan Fuller to hit viewers straight in the feelings bone when it came to the complex reality of family relationships.

Every member of the Pie Hole gang had a complicated relationship with their biological family, and, in every case, that relationship shaped who they were as people. Ned didn't let himself get close to people after his mother's death and his father's abandonment, Chuck's unrealistic ideas about her father almost crushed her spirit, and the ache of missing his daughter certainly didn't help Emerson's gruff attitude. Even Olive's family life was complicated by a bit of Stockholm Syndrome where her former kidnappers were concerned.

In the world of Pushing Daisies , family was messy, hard, and often heartbreaking, as these seven moments so vividly illustrate.

1. Chuck Discovers The Full Extent Of His Powers When He Accidentally Kills His Mom

The elation Ned must have felt when his touch brought his mother back to life was quickly extinguished when a second touch left her dead forever. Did I mention he was just a child when this happened? It's no wonder the pie maker struggled to connect with people after that.

Chuck was everything to Vivian and Lily, and, when they lost her, they did not cope well. They both became depressed and even more reclusive than they were before. It took mood-enhancing drugs slipped into their pies to get them to consider leaving the house.

Lily kept her secret for 30 years to protect her sister, which made the moment when she told Vivian that she was Chuck's mother, revealing her affair with Vivian's fiancé in the process, all the more painful. The close sisters made it through the revelation thanks to Chuck's reappearance in their lives, but thinking about how long Lily carried the weight of the secret will break your heart.

4. Emerson Writes A Pop-Up Book In Hopes Of Finding His Daughter

After his divorce, Emerson's ex-wife wouldn't tell him where their daughter was, and the detective's unsolvable case became his most personal one. On pure hope alone, Emerson wrote a pop-up book in an attempt to reach out to his daughter.

5. Chuck Betrays Ned To Bring Back Her Father

The cost of bringing Ned's mother back to life was the death of Chuck's father, something Ned couldn't possibly have known as a child. He still tries to make amends by bringing Charles back to life for one minute so Chuck can say goodbye, but Chuck's desire to keep her father alive resulted in Ned being responsible for yet another death in the name of family.

6. Chuck Lives Her Life In Seclusion For Her Aunts

The most tragic part of Chuck's death was it occurred on her first trip out into the real world. Because of her aunts' phobias, Chuck lived life through stories. Even when she got older, she didn't want to leave her aunts alone, so she sacrificed her own happiness to make sure they were taken care of.

After his mother died, Ned's father sent him away to boarding school and ultimately started a new family that Ned wasn't a part of. That meant the only family Ned had left in the world was his loyal dog Digby, who he could never touch again because he had already revived him once.

There was an abundance of pain associated with family in the world of Pushing Daisies, but, despite all the heartbreak, there was beauty in those complicated familial relationships, too.