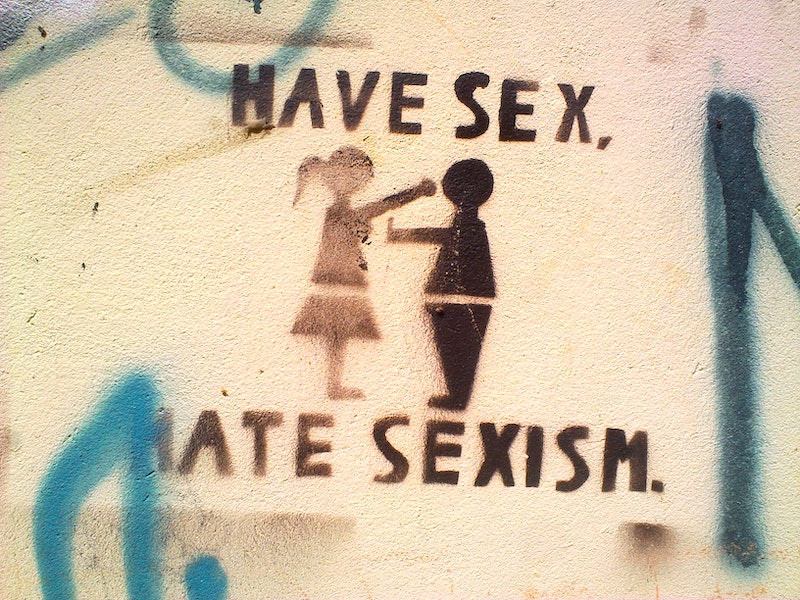 Many of us, even feminists who date likeminded people, have dealt with sexist partners. Even more of us have dealt with sexist behaviors in partners who are not sexist people overall, since it's virtually impossible not to internalize any of the misogyny our society promotes. The signs your date is sexist or holds certain sexist views can slide under the radar, however, since many of us are used to encountering sexism on a daily basis and don't even notice it. And if you're like me, you may miss them because you like to see the best in people and give them the benefit of the doubt.

Unfortunately, while it's generous to assume that someone didn't mean that sexist thing they just said in a sexist way, sexism is still best nipped in the bud. Sometimes, if you call someone in and explain how their sexist behavior made you feel or how you're worried it could make others feel, they'll apologize and thank you for pointing it out. Other times, they'll get defensive and continue doing it. Either way, you'll get more information about how suitable a partner they are for you.

Feminists are often gaslighted into believing that holding their partners accountable for promoting gender equality is unreasonable. It's not, but the beauty of dating is that you don't have to be reasonable. If people can choose only to date people of a certain religion or profession or body type, you're sure as hell entitled to date only feminists. You should never feel like you have to apologize for being picky or stay with someone who doesn't share your values.

That said, here are some signs you and your partner may need to have a talk about sexism.

1. They've Made You Feel Belittled

Of course, this can happen to anybody regardless of gender. But if you are a woman and your partner is a man, belittlement can be a sign of sexism because it reflects the belief that what you have to say is less important than what he does. Women are interrupted more often than men, and men often explain things to women that are within those women's areas of expertise or lived experiences (known as "mansplaining"), so if your partner does this, it may be part of a larger, gendered pattern. Even if it's not, you still have the right to be heard just as much as he does.

2. They've Pressured You About Your Body

What we do with our bodies is our choice, so if your partner makes you feel bad about choices regarding your own body, it may reflect an unhealthy entitlement complex, regardless of your or their gender. If something about your body is affecting your partner (bad breath is an example), they have the right to politely say something, but what you do about it is still ultimately your decision, and if they simply don't find your fashion, beauty, or fitness choices aesthetically pleasing, that's not really their business.

3. They Don't Ask You For Consent

Even if someone's not an outright rapist, any sort of sexual misconduct is a red flag. A respectful person is not interested in sex, kissing, cuddling, or anything else with someone who does not freely consent, and they're willing to ask for your consent so they don't risk making the wrong assumptions. If you're uncomfortable in the middle of a sexual encounter, they'll stop immediately. If you aren't in the mood, they won't try to change your mind. Again, this is more often an issue for women, but it applies regardless of your gender.

4. They Pride Themselves On Being A "Nice Guy"

Don't get me wrong — there's nothing wrong with being a nice guy. But if someone wants everyone to know how nice he is, beware: He may be trying to use his "nice guy" status to get what he wants. "Nice Guy Syndrome" is an entitlement complex stemming from the belief that men are entitled to special treatment — particularly from women — in exchange for basic human decency. And they're usually not nice at all. If someone tells you he's better than other guys because he's nice or that he deserves something from you in exchange for his kindness, back away slowly.

5. They Make Assumptions About You

Relationships are about getting to know each other on a profound, intimate level, and making gender-based assumptions impedes this goal. If your partner assumes you love kids because you're a woman or like to watch sports because you're a man, they're not really listening to you. Even if these assumptions seem positive, like the belief that someone is very empathetic because she's a woman, they still stand in the way of viewing that person as an individual. If your partner assumes something about you, let them know how you really are and that you'd prefer they ask you what you like or what you're good at before jumping to conclusions.

If a guy feels the need to always pay for a female partner's dinner or open doors for her — such that he refuses to let her do either, ever — he may not be secure in his masculinity. And if a woman pressures a male partner into exhibiting these gestures, she's not respecting his autonomy. There's nothing wrong with practicing chivalry if that's what both partners want, but it becomes a problem when it isn't a mutual decision or impedes equality in the relationship.

7. They Make Jokes At One Gender's Expense

It's not particularly funny to hear about how difficult women are when they're menstruating if that stereotype prevents people from taking you seriously. And the notion that men can't take phone messages isn't exactly hilarious when it makes people view you as a less competent person (and leads them to conclude that women have to do all the housework). There are plenty of things couples can laugh about that don't have anything to do with each other's supposed gender-based incompetencies.

8. They Give You A Hard Time For Bringing Any Of This Up

If you are feeling belittled, pressured, disregarded, or pigeonholed in your relationship and your partner doesn't want to fix that, that's another sign they don't respect you. And if they tell you that you're being paranoid, oversensitive, crazy, or the PC police, that is an example of gaslighting, an emotional abuse tactic used especially toward women to make them doubt what they know to be true. A relationship can survive a lot if problems are communicated and discussed, but if you feel like you can't even confront your partner without being attacked, you two aren't equipped to handle future obstacles together. Fortunately, there are plenty of people out there who are equally angry about the sexist behaviors some people exhibit in relationships and will at least listen if they end up being guilty of them.