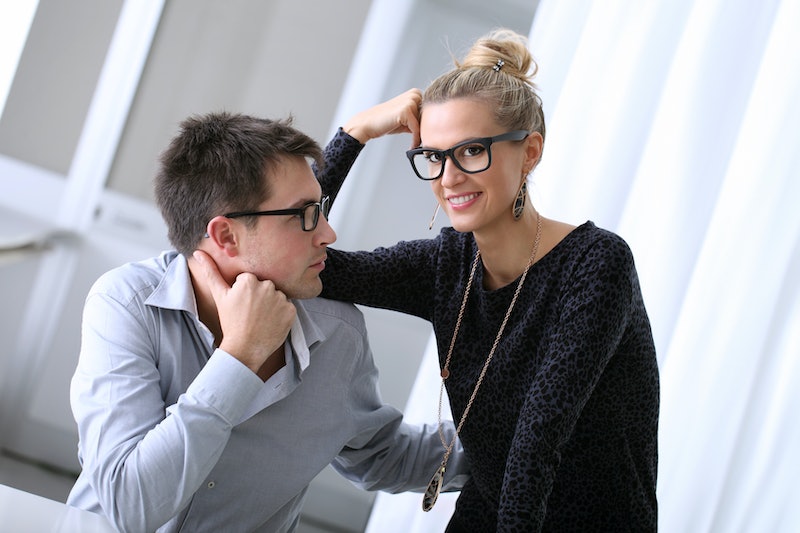 With the holidays coming up, ‘tis the season for office parties — and perhaps finding yourself under the mistletoe with your work crush. Though some people are against the idea of dating your coworkers, some aren’t, and data from Match's Singles In America study revealed it’s more common than people think — one-third of singles have dated a coworker.

Personally, I think work is a great place to meet someone — as long as you keep things professional, like not drunkenly making out under that mistletoe for all to see. Sure, things can get complicated if you two break up, and you may need to walk a new route to your desk for a while, but I think dating someone from work makes sense. (Plus, maybe you work on opposite sides of the building, so you work together but don't work together!) After all, we spend so many of our waking hours there that it’s not surprising we’d find a love interest there.

Even celebrities meet at work (I mean you, Gwen Stefani and Blake Shelton, a pairing I love). On The Voice , they are pretty professional on-camera (and it’s probably good their chairs are not right next to each other), as you and your work boyfriend or girlfriend should be, too.

I think there are more pros than cons for trying it out — I know not everyone wants to deal with the post-breakup aftermath and some offices ban inter-office dating. But, just think, there may be no breakup and isn’t it worth the risk if it means finding someone special? Just think of Jim and Pam from The Office. That does happen IRL, too.

1. 35 Percent Of People Have Dated Someone They Work With

According to the Match data, 35 percent of people have dated someone they work with, 37 percent of males and 34 percent of females. I'm impressed! In addition, 55 percent of those people don't try to hide it. I think this is a case-by-case basis, as I know some bosses get nervous about co-workers dating, so the daters keep it on the DL for a while, some even for the duration of them working at the same company. Like I said before, I think meeting a significant other in the workplace is a great idea. After all, dating's hard enough, so why not expand the pool of potential places to meet someone?

2. 57 Percent Of People Think A Happy Relationship > Their Career

What is more important to you: A happy relationship or your career? I know you probably want to say "both," but if you had to pick one, which would it be? (Good question, right?!) The Match survey found that 57 percent of those questioned, 57 percent of males and 56 percent of females, said that a happy relationship is more important to them than their career. That's just over half, and, theoretically, we'll be partnered with someone longer than we'll be working, so...

3. Flirting With Your Work Crush Is Cool, Even If It Happens In The Office

Ah, flirting — to send that emoji-filled email to your work crush... or not? Match results found that 14 percent of people said they have flirted with a colleague via email. (Quick tip: Use your personal email address, never the work one! Just think of an unbeknownst day that you'll call in sick... and some temp or coworker will be able to read your entire love saga!)

Match's survey also discovered that 75 percent of men and 66 percent of women said it is acceptable to flirt with a co-worker, but 43 percent said after work. However, 39 percent said it's acceptable at the office. I know when I had an office-boyfriend-turned-boyfriend, we tried to keep things on the DL for a while at work, but soon everyone found out. (Him dropping off coffee at my desk each morning and “sending” me notes and gifts via inter-office envelopes probably didn't help our cause!) But, when people found out, guess what? No one cared! If anything, it was the opposite and they all tried to set our wedding date! After all, he and I still got our jobs done and focused on those first and foremost.

4. Most People Would Never Flirt With Their Boss

The Match data also concluded that 92 percent of people said they would never flirt with flirt with their boss. Good move! I thought it would be more than 92 percent, but I have heard of people marrying their bosses. (Hopefully, though, one of them switches jobs after the wedding!)

5. Men Are More Into Work Crushes Than Women

Of the 35 percent of Match survey respondents have dated someone at work, 65 percent of them have had a one-night-stand and 56 percent have had a friends-with-benefits relationship with their coworkers. I wonder if people are afraid to commit to dating because of the working-together thing