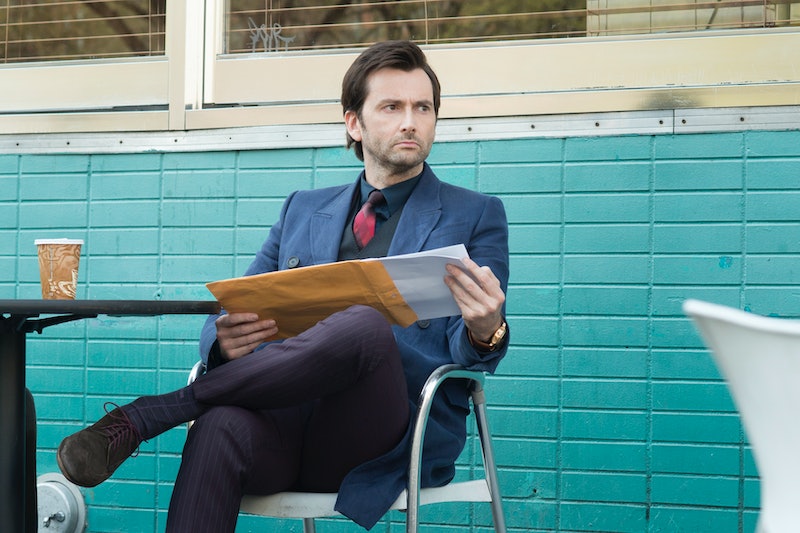 Is how someone was raised an excuse for his behavior as an adult — even if that person turns out to be a mind-controlling murderer? That's the question that Jessica Jones wants viewers to consider, just for a moment, when the story of Kilgrave's background and parents is revealed on the new Netflix Marvel series. While David Tennant's character was shown as being a soulless, dangerous psychopath, his backstory reveals that at least part of how he came to be stems from his scientist parents. Spoilers for Episode 9 and on of Jessica Jones follow.

After buying Jessica's childhood home for her, Kilgrave said that his childhood had been nowhere near as healthy or normal as the young super sleuth's life was before her family died in a car accident. He then revealed that the yellow USB flash drive that Jessica had dug up from Reva Connors (when Jessica was under his mind control) was actually video footage of experiments that were done to a young Kilgrave by his parents back in 1985. As the young Kevin Thompson (Kilgrave's real name) gets tortured at the hands of his parents with neurological exams, fluoroscopy, brain biopsies, and cerebral spinal fluid extractions, the unthinkable begins to happen — you actually start to feel a little bad for baby boy Kilgrave.

Perhaps it was my love of actor Tennant and the pleas and cries from the young Kevin on the film that made me completely believe that back then, he was just an innocent child with psychotic scientists for parents. I mean, his parents gave him his powers of mind persuasion, then abandoned him at a young age. But Kilgrave is a master manipulator, so of course, not everything on the 30-year-old video is as it seems.

Jessica, using her private investigator skills, discovers that little Kevin’s parents — Albert and Louise Thompson — are still alive after fleeing the University of Manchester when Kilgrave was only 10 years old. When Jessica finds his parents holed up after Louise (with her face burnt) was attending the Kilgrave support groups, she demands answers for the monster they created. But it turns out Kilgrave wasn't exactly forthcoming about his parents.

Louise explains that Kilgrave was actually born with a degenerative neural disease that would have left her son brain-dead before he was 12. All of the experiments his parents performed on the videos were to save his life — and an unfortunate side effect of saving him was the mind control. And once young Kilgrave got that power, he used it against his parents, including making his mom put an iron to her own face.

The Thompsons escaped from the powerful son that they had unintentionally created, leaving Kilgrave to not only have super human abilities, but also parent problems for the rest of his life. While you can wonder all about the the effects of nature versus nurture, Jessica's message to Louise and Albert rings the most true, "If your parenting didn't make him a sociopath, your lack of parenting did."

Albert and Louise do end up listening to Jessica's not-so-subtle message that they need to take responsibility for what their son has become, but as expected, Louise gives too little too late. And while Albert is helpful in the fact that he reveals to Jessica that Kilgrave's mind control is actually a virus, he continues to get sucked into the mind games that his son had used on him years ago — and actually ends up helping to make Kilgrave stronger than he ever was before. Maybe Albert and Louise should have tried to help Kilgrave instead of leaving him on his own as a child, but even then, they didn't deserve the cruel fate that he had been dreaming about for years, and none of it excuses the villain's despicable actions since then.