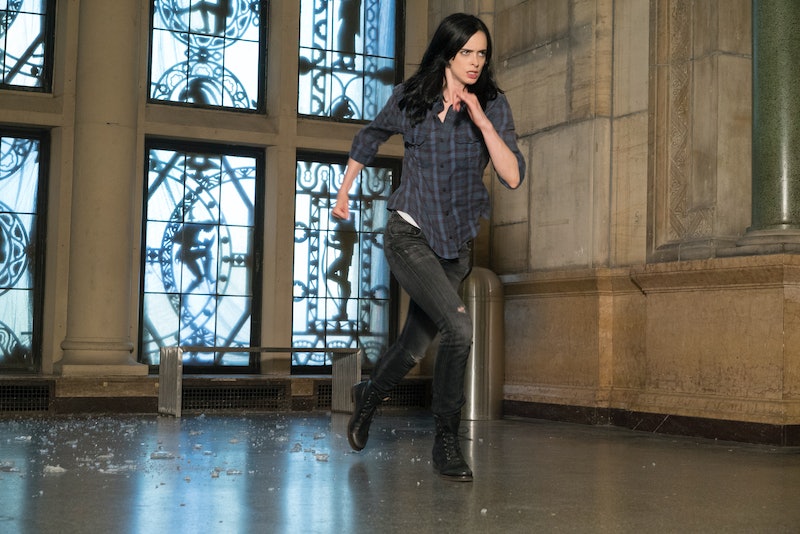 The character Jessica Jones is a creation of the Marvel superhero universe, so the private investigator has more abilities than just her super-spy skills. But her identity on Netflix's Jessica Jones isn't defined by her superhuman abilities and because of that, Krysten Ritter's Jessica is the most emotionally-layered character Marvel has ever shown on-screen. Jessica's powers may have been what lured Kilgrave to sadistically choose her to mind-control, but they aren't the reason that the Netflix series has been getting generally positive reviews or why it was all anyone could talk about the weekend it was released. Marvel's Jessica Jones focuses on the humanity of Jessica — not her superhero status — and it's a groundbreaking shift for a comic book story.

Often movies like The Avengers don't focus too much on human emotions. While Avengers: Age of Ultron might sprinkle in Hawkeye's relationship with his wife, show a hero's conflict over what to do, and add a dash of a love story between two Avengers, those plot points are not developed as the main action. At their worst, those elements can seem tacked on to make the audience feel like they can relate to these superheroes. But the problem is that I frankly can't relate to Black Widow, Captain America, Hawkeye, the Hulk, Iron Man, or Thor — and the superheroes' relatability isn't the point of the blockbuster anyway. Jessica Jones, however, is a whole other story.

When a filmmaker's main goal is to create a supersized movie with a ton of special effects, action sequences, and the outrageous motives of a super villain, there isn't much room left for actual feelings. Of course, Age of Ultron didn't cost $250 million to tell an emotional and compelling art house story. And because the Avengers series in particular depends so heavily on a mash-up of so many superheroes, the Jessica Jones series may be the furthest away from the film franchise. Yet, Jessica does live in the same world as Luke Cage and Daredevil (and they exist in the Marvel Cinematic Universe, alongside the Avengers), so she's not an isolated protagonist, and the show does need to balance her tale with other heroes.

But Jessica Jones is really all about who she is as a person — not a superhero. And none of Jessica's emotional resonance has anything to do with her gender. In fact, she may be even less emotionally accessible than most of her male counterparts. Only a few minutes into Season 1, the hard-drinking and hard-hitting woman admits that she excels at finding the worst in people. Jessica is emotionally closed off and only allows a select group of people to get close to her — really only one person, her best friend Trish Walker. Jessica expands that number to a whopping two by the end of Season 1 (though there's some potential for Malcolm), proving she is still extremely guarded.

The characters and storytelling are what make this Marvel series a genuine human story. For example, Jessica and Trish's friendship is based on real loyalty that has clearly been earned over the years. Whether the series shows Jessica and Trish enjoying drinks at happy hour or Jessica witnessing the child abuse her friend suffered, the show makes their dynamic a sincere — and believable — friendship.

As for Jessica's interactions with the bad guy, Kilgrave is obsessed with Jessica, since he falsely believes that part of her wants to be with him. And Jessica suffers from post-traumatic stress disorder stemming from being raped by Kilgrave, as well the horrific things he made her do when she was under his control, including killing people. This is not your average superhero-villain power struggle and the show is strengthened by the complex, psychological aspects of their battle.

Jessica also tends to cause her own emotional destruction, as highlighted during her first sex scene with Luke Cage. The remorse and regret Jessica has when she enters Luke's bathroom and looks at the photo of Reva in his medicine cabinet is palpable. She can barely bring herself to look at Luke when she flees from his room after their sexual encounter. The moment of shame was so affecting because of the show's handling of the sensitive subject, as well as Ritter's performance.

But Ritter's acting isn't the only reason that Jessica Jones makes me connect to her more than any other superhero out there — I mean, the Hulk and Iron Man are portrayed by a Oscar-nominated actors for Odin's sake! Of course, some may argue that because Jessica Jones is a TV show, it has more time to tell her story. Still, when movie superheroes are getting three movies and still no real human motivation, that particular argument falls a bit flat. Episodic storytelling may allow for a more intimate look at her character, but Jessica is already more nuanced and fleshed out than any big-screen hero.

The Avengers movie franchise will probably keep on doing what it's doing, and I'll continue to put the money I would have spent on a movie ticket and popcorn toward my Netflix subscription. Because the most dynamic Marvel superhero for me is the one who is emotionally conflicted, doesn't wear a costume, and still uses her powers for good — Jessica Jones.