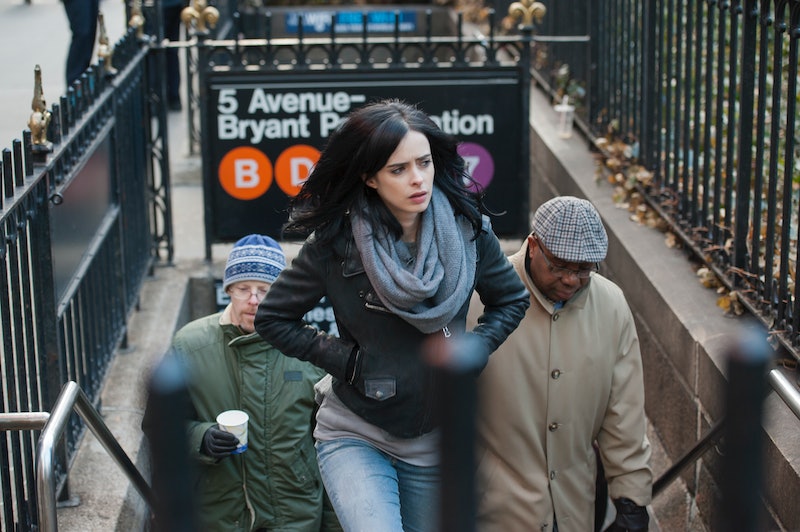 With the full season of Marvel's Jessica Jones (finally!) being released on Friday, Nov. 20, Netflix's Marvel universe has gotten much bigger, much darker, and much more super. After Daredevil, Jessica Jones is the second Marvel show from the streaming juggernaut (no relation to the Marvel character Juggernaut) and since the characters of Matt Murdock and Jessica Jones cross paths throughout the Marvel comics, the two Netflix series Jessica Jones and Daredevil are bound to crossover. While you probably shouldn't expect to spot the beautiful Charlie Cox in the background of a scene, Matt and Jessica live in the same world — and there's no way Netflix is not going to take advantage of some of those connections.

Marvel Head of Television Jeph Loeb talked to ETonline back in July about the potential for crossover between Jessica Jones and Daredevil.

Without giving anything away, they’re in the same area. In some cases they are in the same neighborhood. One of the things that is important to us is, when you enter the police station, it’s the same police station. When you go to the hospital, you start to see the same people. [But] we don’t want people suddenly going, "Wait, is that Matt Murdoch [sic] that’s walking down the street?" Because that’s going to feel odd, and in a weird way feel false.

While Loeb gave some spicy tidbits (more on that hospital comment later!), people behind the scenes have not been overly forthcoming with how exactly Jessica Jones and Daredevil will connect. Before Season 1 is released, here are some of the (mostly confirmed) ways that Krysten Ritter's new anti-superhero will crossover with Daredevil.

Hell's Kitchen is the beloved home to Daredevil, and Jessica Jones takes place in the same New York City neighborhood. But besides these two characters living on and protecting the same streets, Daredevil's Twitter account teased another connection. In the above video, it looks like Josie's bar, that Matt and his friends Foggy and Karen frequent, will either be joined — or replaced — by the bar Luke's, run by none other than Luke Cage (who is getting his own Netflix show). The trailer of Jessica Jones prominently highlighted Jessica drinking at Luke's bar, so could Daredevil's Twitter be hinting at some Daredevil characters stopping in to Luke's for a drink? That may be too much to hope for, so I'll have to be satisfied with the fact that Daredevil and Jessica Jones will share the same police station and hospital — if not bar.

Nerdist News host Jessica Chobot spoke to Jessica Jones showrunner Melissa Rosenberg and asked her how aware the characters of Jessica Jones are of the man, the myth, the legend — Daredevil. "I don't know if there is a good answer for that," Rosenberg said, laughing. "The mythology holds the same rules. It's the same level of reality. Very grounded, very much of the street, of the neighborhood. So yeah, there's some crossing and sort of bouncing off certain things." While Rosenberg's reply didn't really give any insight into the character of Daredevil and his connections to Jessica, there is no doubt that Jessica Jones will have the same gritty, ultra-realistic feel that Daredevil had. While Matt doesn't have a lot of vices (besides the whole masked vigilante thing), Jessica has issues with alcohol and is haunted by her past with villain Kilgrave (portrayed by the magnificent David Tennant). So while the show will be witty, expect it to be just as dark as Daredevil — and perhaps even more so.

Besides seeing familiar landmarks of Daredevil while you're watching Jessica Jones, get ready for at least one familiar face. As Loeb alluded to ETonline, there will be someone you've seen before at the hospital in Jessica Jones — nurse Claire Temple. Actress Rosario Dawson confirmed that she'll be appearing in Jessica Jones, along with other Marvel spinoff Luke Cage. (Not to mention, girl will be keeping busy since she's also going to be in Season 2 of Daredevil .) A world without Dawson is not one that I want to live in, so the inclusion of her character Claire in three of Netflix's Marvel shows was smart move. Leading up to the release of the show, Claire was the only confirmed character making a definite crossover, but that doesn't mean we couldn't see an appearance from...

While Loeb and Rosenberg will not confirm whether or not Daredevil will be in Jessica Jones, considering that in the source comics Kilgrave manipulated Jessica's superhero alter ego Jewel into attempting to kill Daredevil and Matt was Jessica's lawyer while she was private eye, the characters not interacting in Jessica Jones would be a waste. Not to mention that Jon Schnepp of Collider said on Collider's Heroes in October, "You're definitely going to see Matt Murdock in Jessica Jones . That's a fact. He's in it. I don't know how they interact, but he's in the series." Schnepp comments sound quite definitive, but no other source is confirming that Cox will make an appearance in Season 1 of Jessica Jones. Yet, the actor did confirm to Close-Up Film that it's in his contract to appear in other Marvel properties. So how hard would it be for him to pop on over to Jessica Jones?

Even if Matt Murdock (as Daredevil or as his lawyer self) does not show his face on Jessica Jones Season 1 when it's released on Friday, Nov. 20, these two superheroes will have to meet up eventually. Maybe after her first season, Jessica will come knocking on the doors of Nelson and Murdock Attorneys at Law in Daredevil Season 2. But even without the Daredevil connections, Jessica Jones will be a show that can stand on its own — just like its badass hero.