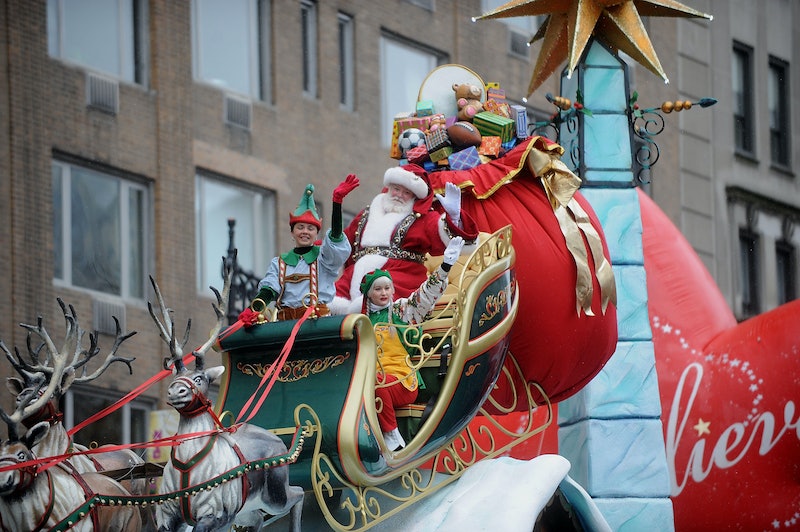 Before we get to the many (many!) pop stars who will be making appearances, thanks to the New York City location of the parade, the Broadway productions of Fiddler on the Roof, Finding Neverland, The King & I, On Your Feet!, and Something Rotten will all be performing, which is definitely the most exciting part of the parade for this musical theater geek. Not to mention, the Radio City Rockettes are starting the show, Cirque du Soleil will be dazzling the crowd, and the parade will have a sneak peak performance of The Wiz Live!, which airs on Dec. 3 — on none other than NBC.

As for non-music related appearances, TV chef Sandra Lee, Miss America 2016 Betty Cantrell, and hockey legends Mark and Marty Howe (sons of Gordie Howe) will also be in attendance. As for kid-friendly fare, the cast of School of Rock on Broadway, Questlove with Sesame Street, and Chica from the preschool channel Sprout are joining the festivities, too.

But the focus really is on the music since the rest of the guests that NBC and Macy's have been promoting are musicians in some form or another. Although the majority of the following artists will most likely not be singing live, you can still watch these musicians perform (or just wave) in the not-so ideal weather outside, while you're snuggled up on the couch this Thanksgiving.

The Season 6 winner of American Idol (RIP to the Fox show) Jordin Sparks will be teaming up with Macy's again after performing at the company's tree lighting ceremony on Nov. 22 in Atlanta, Ga.

The diva of the Christmas jams, Mariah Carey, will be at the parade — even after the harsh and unfair criticism of her performance at the Rockefeller Center Christmas tree lighting ceremony last year. You can't keep Mimi down!

The upbeat "Honey, I'm Good" made Andy Grammer famous, but he also showed that he's got moves alongside his partner Alison Hollker on Dancing with the Stars this year and a song and dance man is always welcome at the parade.

The longtime rockstar couple Pat Benatar and Neil Giraldo will be performing their new song "One December Night" live during the parade. As a person who has seen these two perform recently, I can say they both still got it.

While the band Plain White T's is best known for their song "Hey There Delilah" (which is nearly a decade old!), their appearance at the parade coordinates with the release of their new music video for "American Nights."

Another American Idol alum, Daughtry will help Benatar in bringing the rock to the parade.

Christian band MercyMe will be there after also performing at the tree lighting in Atlanta with Sparks.

Two of the stars from the Disney Channel movie Descendants, Dove Cameron (Mal) and Sofia Carson (Evie), will be performing at the parade if you just cannot handle the wait until Descendants 2.

The "Fight Song" singer will help to uplift parade viewers on Turkey Day with her power pop.

Jennifer Lopez won't be accompanying Prince Royce on "Back It Up" at the parade, but the singer should do just fine on his own.

Andra Day just started to get noticed in 2015 and being at the Macy's Thanksgiving Day Parade will be sure to earn her some new fans.

If you're a die-hard Descendants fans and Cameron and Carson aren't enough, Shawn Mendes, who performed "Believe" for the Disney Channel movie's closing credits, will also be at the parade.

The bluegrass band Mipso, whose band members came together while attending the University of North Carolina, will be entertaining fans of folk music at the parade.

Jennifer Nettles, who is usually busy during the Christmas season hosting CMA Country Christmas, will take time to embrace Thanksgiving this year too.

Nettles won't be the only country singer represented at the parade since Jake Owen is also making an appearance.

Panic! At The Disco

Panic! At The Disco has been celebrating their new music video for their song "Victorious," but they still are making time to stop by the parade.

He may have just lost to The Weeknd for favorite male artist — soul/R&B at the American Music Awards, but that won't stop Trey Songz from performing on a float on Thanksgiving.

Macy's likes to be responsible for rolling in the Christmas season and Train is helping with that since the band has released their own Christmas album, Christmas in Tahoe , and will be joining the parade.

With this plethora of bands, you can start your Thanksgiving day singing. The Macy's Thanksgiving Day Parade runs from 9 a.m. to 12 p.m. (in all time zones) and once the parade ends, the Christmas season will be in full force (even if you don't want it to be). So savor your turkey because Santa is coming to town soon.