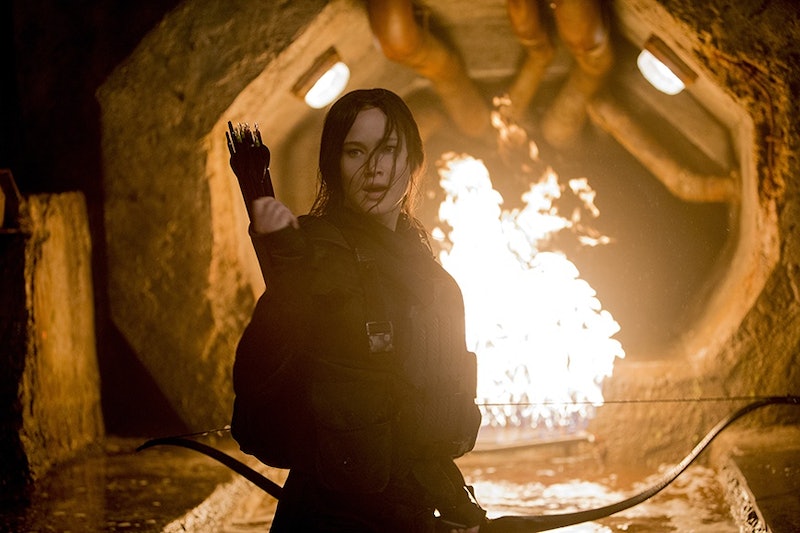 When the filmmakers responsible for The Hunger Games: Mockingjay, Part 2 sat down to craft the ending to the epic franchise, they didn't really have much of a say as to how Katniss' story would end. After all, The Hunger Games is based on the original YA series by Suzanne Collins, and fans of the series would not have responded kindly to a change in the ending. To that end, Collins herself was involved in the writing of Mockingjay, Parts 1 and 2, providing screenwriters Danny Strong and Peter Craig with a detailed outline. But, The Hunger Games ending isn't satisfying because it follows the events of the book. The Mockingjay ending is satisfying because it doesn't ignore Katniss' trauma.

It would be easy to accuse Mockingjay, Part 2 of giving Katniss a happily-ever-after ending. The film ends with an epilogue that finds Katniss with Peeta, enjoying a countryside picnic in District 12 with their two young children. They survived the Games, the rebellion, and the nightmares that came after, and now their lives appear to be filled with green grass and pretty sunsets. This image, however, is deceptive. Yes, Katniss and Peeta found enough strength in each other to continue living. And, yes, they found enough hope to want to have a family of their own. But, they also live alone in almost complete isolation.

It might sound like an unusually bittersweet end for the woman who saves Panem from tyranny, but it's much more honest than any sort of happy, cookie-cutter alternative. What is so refreshing about the ending of Mockingjay and The Hunger Games saga is that it doesn't forget all the psychological damage caused by events from previous installments in the story. Katniss never gets over her first experience in the Games — she never stops feeling guilty for killing in the Arena, or feeling sad at the thought of Rue.

The psychological trauma of being used, first by the Capitol and then by President Coin, drives Katniss in Mockingjay, Part 2. That much is evident at the beginning of the climax in Mockingjay, Part 2, when Peeta tells Katniss that she needs to kill President Snow to make all their deaths and lives mean something. So, it makes sense that the trauma would continue to affect her after President Snow is dead. In the end of Mockingjay, Katniss has hope, but she is also still suffering immensely from the events of The Hunger Games and Catching Fire, as is Peeta.

There's a reason why Katniss Everdeen, the Girl on Fire who inspires a rebellion, has become a feminist icon in the fictional world. It's not by default for being a woman, or because she beats a man at his own sadistic game, but because she is flawed and real. And the bittersweet ending of Mockingjay reflects that realism by allow future Katniss to still feel the effects of everything she's been through.

The ending to Mockingjay might not be completely satisfying for Team Gale fans (for obvious reasons), but for everyone else, Mockingjay, Part 2 is a perfectly honest ending to Katniss' story.